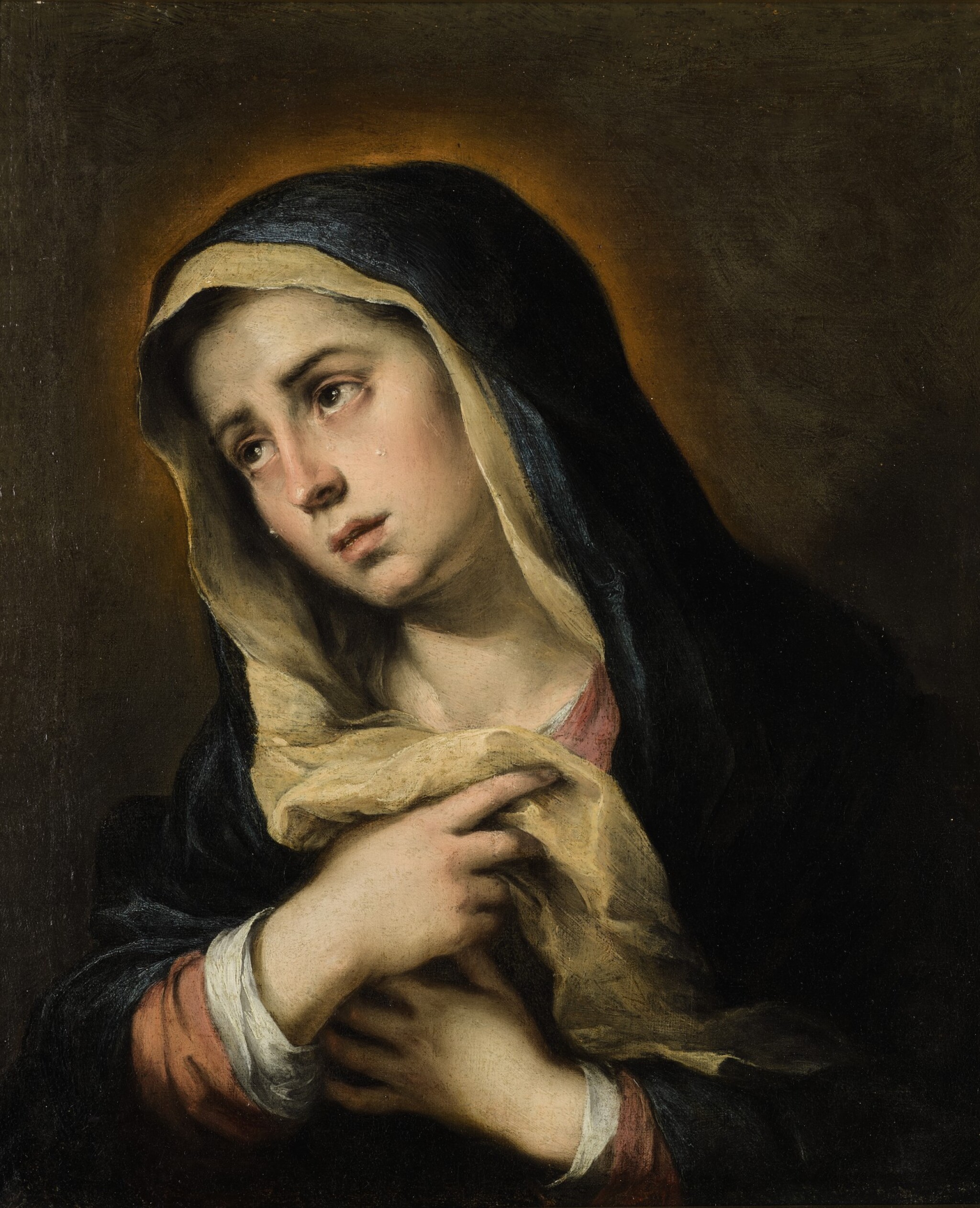 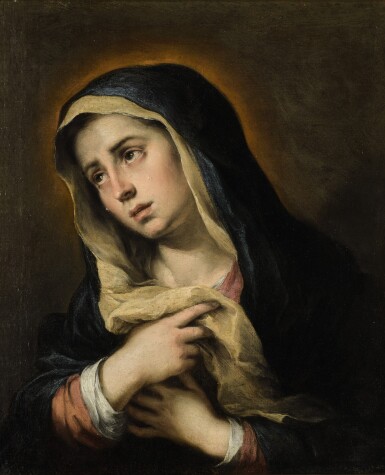 Bartolomé Murillo Mater Dolorosa Oil on canvas, unframed The original canvas has been wax/resin lined and strained over a dry back canvas.

The lining is in a good preserved state The paint layer is well preserved and is stable and secure. The edges of the composition have been repaired. Natural ageing of the paint layer has allowed the ground layer to dominate in some areas of the background; mitigation of this natural phenomenon has occurred and is visible under u-v lighting. Excessive and unsympathetically applied restoration to the skin tones is apparent to reduce minor loss and discolouration. Original brushstrokes and paint texture are well preserved. Slight natural thinning and fading of the blue of the sitter's cloak is evident. Some of the darker passages have been compromised and the red glazing to the red dress has been slightly abraded. The vigour in the application of paint to the mantle and cuffs is retained . The skin tones are in a good state and the tonal and chromatic values are intact. Removal of a discoloured varnish would enhance the tonality of the image.

From whom acquired by a private collector, UK;

This sensitive and emotive portrayal of the young Mater Dolorosa, the Madonna in mourning, would most probably have been paired originally with a depiction of the Ecce Homo, Christ bound and crowned with thorns. Such pendants were extremely popular in Spain during the Counter-Reformation, and Murillo responded to a strong demand for the subjects with several iterations of the theme. The pendants were intended as devotional works designed to inspire a powerful spiritual response from the viewer, and Murillo's talent for the portrayal of convincing human emotions was perfectly suited to such subjects. Devoid of narrative context, the focus of this painting is found in the Madonna's upturned gaze and the tears that fall down her cheeks, her grief also evident in her supplicatory hands and the folds of her veil.

In other depictions of the Mater Dolorosa Murillo appears to have been influenced directly by Titian, whose version of the subject Murillo would very probably have seen on his visit to Madrid in 1658, at the Royal Palace of the Alcázar. The present canvas, however, portrays a younger, more vulnerable-looking Madonna, whose gesture and expression convey the fervour of her anguish in a manner typical of the Baroque.

A studio version of this painting was formerly in the Meadows Museum, Dallas, which was more recently sold at Christie's, New York, 28 January 2009, lot 298 (as studio of Murillo) and is now at Tyntesfield, National Trust, Bristol.1 There has been some confusion in the past as to whether the early provenance and literature related to that work in fact refers to the present painting instead.2 An engraving of the work by Johann Georg Weinhold is the basis on which W. Stirling-Maxwell and C.B. Curtis recorded that a work of this design belonged to Don Francisco Romero Balmaseda, Seville, by 1849, from whom it was acquired, in 1853, by William Gibbs, Tyntesfield, Somerset. Allowing for certain discrepancies in the print-making process, the engraving would, however, appear to follow the present painting more closely, particularly in details such as the crook in the little finger of the Madonna's left hand.3

We are grateful to Dr. Benito Navarrete Prieto for endorsing the attribution to Murillo on the basis of digital images.

2 For the early provenance, literature and exhibited history of the other version, see: https://www.christies.com/lotfinder/Lot/studio-of-bartolome-esteban-murillo-seville-1618-1682-5175981-details.aspx