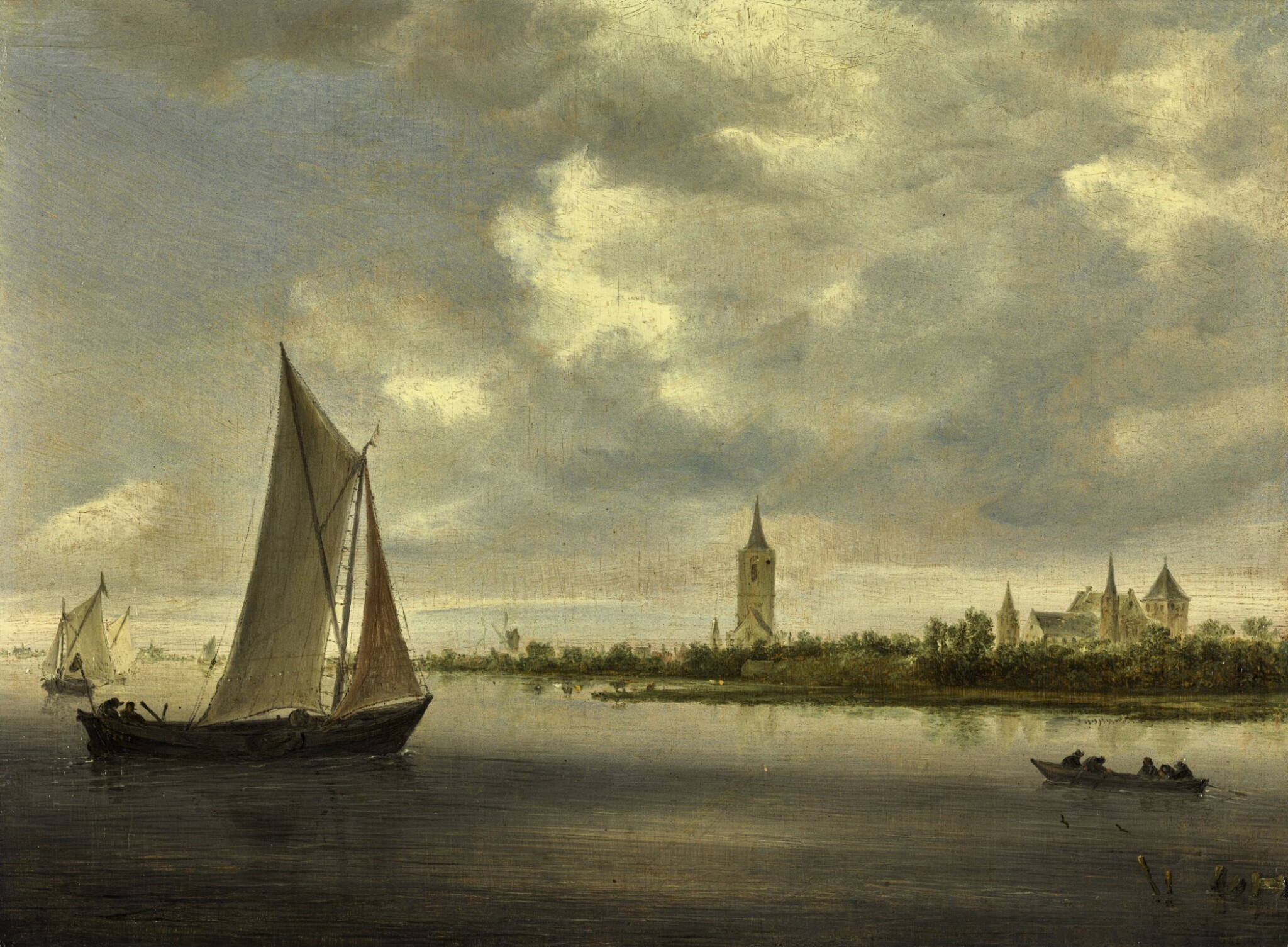 Property from the Collection of Peter Baltzer

A river landscape with sailing boats, possibly a view on the Wijkermeer

signed on the leeboard of the boat lower left: SvR

oil on oak panel, the reverse with an unidentified wax collector's seal

The oak panel is in a good preserved state. It is evenly chamfered on three sides only. The wood grain is vertical; there are no splits or deformations. The paint layer is very well preserved. The paint texture and impasted highlights are in good original condition. Under u-v light restored diagonal scratches across the surface are visible. These bite in to the paint layer and have caused minor paint loss. Very slight aged thinning of the paint layer in the sky has revealed a little more of the ground layer than was originally envisaged; moderate reduction of this, particularly around the church spire, has been undertaken. There has been some over ambitious restoration applied to reduce natural discolouration to some small areas and some of finer details such as the rigging have ben augmented. The chromatic and tonal values are still retained. Slight tonal improvement would be achieved by removal of the varnish.

Where acquired by the mother and step-father of the present owner.

From around 1640 onwards, Salomon van Ruysdael began to paint river and estuary scenes, constantly re-visiting the theme of small sailing vessels navigating the inland stretches of water around Haarlem and elsewhere in the Netherlands. These boats are typically shown in calm conditions, often at sunrise or sunset, and usually arranged in receding diagonals in order to create perspective. This simple compositional design allowed Ruysdael to concentrate, especially in the vertical variations of the format, upon the cloudy skies and their effects on the waters below. Their viewpoint is often, as here, very low, creating the illusion that the viewer is on a similar boat close by. These river scenes were indebted to the work of Jan van Goyen (1596–1656), the most important and prolific artist of this important phase of Dutch landscape painting, but Ruysdael introduced subtle colour variations to the more monochromatic effects of his contemporary, applying his paint quickly and fluently, usually without the aid of preliminary drawing. These scenes were always painted on a small scale, and in some of the very smallest and latest examples, Ruysdael's brushwork becomes increasingly free. The riverscapes themselves were usually imaginary or composed, for Ruysdael's interests were in the skies and the waters rather than any concern for topographical precision. The church in the centre of the horizon is probably intended for, or at least modelled upon, that of Beverwijk, a prominent landmark on the edge of the of the waters of the Wijkermeer. The church was included in a number of similar river scenes by Ruysdael, including those in the the Staatliche Museen in Berlin and and Bacon Collection in Norfolk.1 The large castle or abbey to the right may perhaps be inspired by the nearby Huis Assumberg, but is most likely to be imaginary. It is seen from the other side in the distance of another another river scene, sold London, Sotheby's, 8 July 2009, lot 3. Another church stands in the same relationship to it in that picture as here, but has no spire.