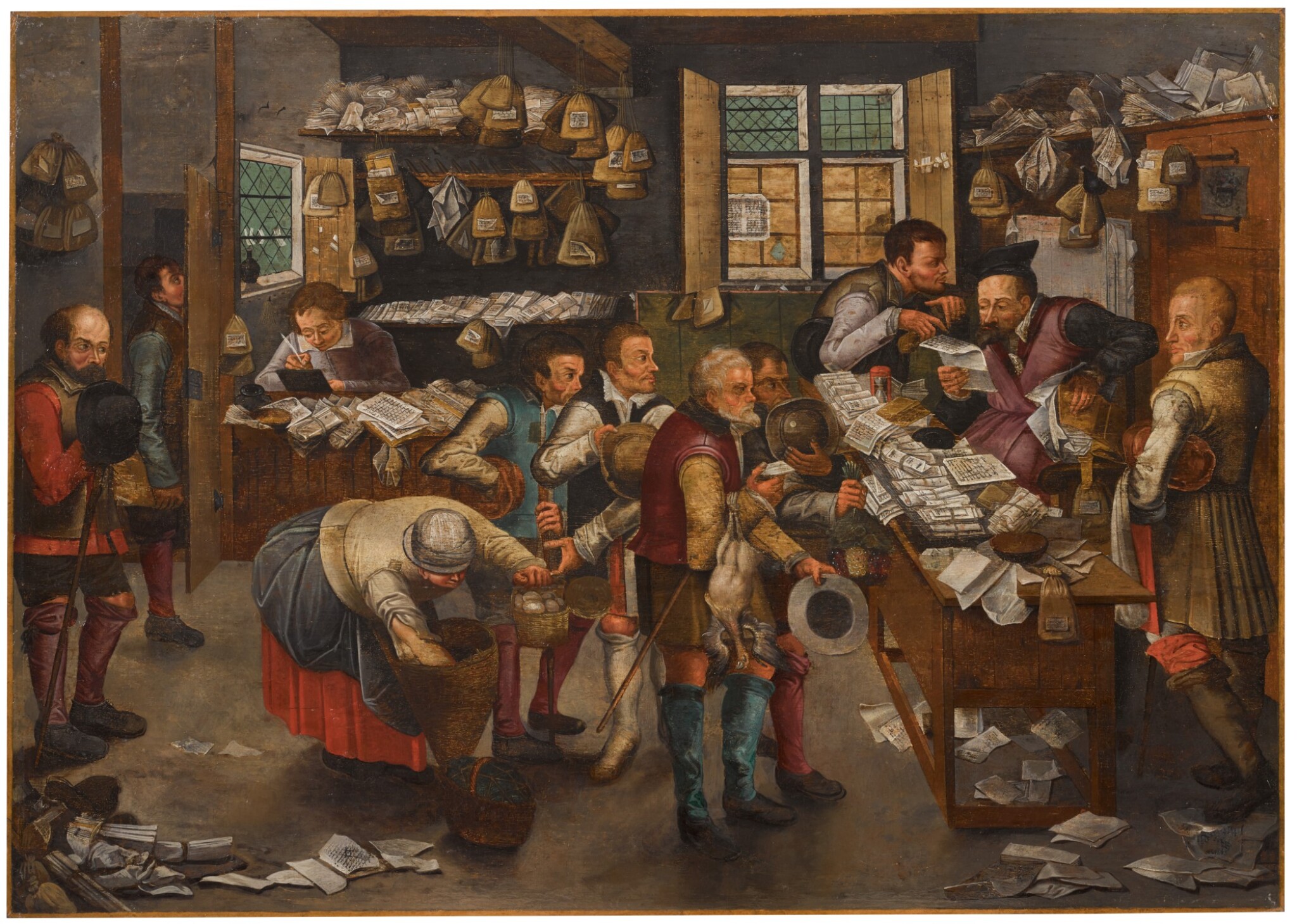 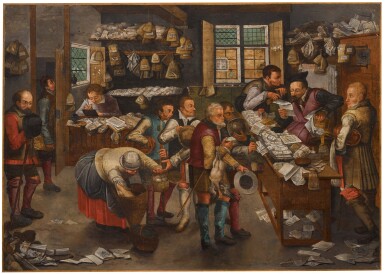 oil on panel, transferred to canvas

The canvas is lined, the paint surface is slightly dirty and the varnish is discoloured. The wood grain and previous horizontal joins or splits in the panel running at intervals of a third are still just visible to the naked eye, with slightly discoloured retouchings running along their length. Other areas of discoloured retouching are visible in the upper left corner, in the door and desk next to it on the left, scattered throughout the foreground, in the blue stockings of the central man holding the chicken, in some of the papers and bowl on the lawyer’s desk, and in parts of the window upper right. There is also retouching to some previous small losses: in the shoulder of the right-most man, in the brim of the hat carried by the central figure, and in the base of the basket of eggs held by the woman on the left. There are a couple of unrestored tiny losses in the shoulder of the man bending towards the lawyer. Inspection under ultraviolet light is impeded by the thick, milky varnish but confirms the aforementioned retouchings and further reveals scattered retouchings throughout, largely in fine lines along the historic wood grain. The painting is in overall moderate condition.

Acquired by the present owner, Midmar Castle, Aberdeenshire, circa 1985, and then in Perthshire, circa 2012.

This composition by Pieter Brueghel the Younger proved to be one of his most popular. Known in numerous versions, of which some twenty-five are considered autograph, the earliest dated version is from the year 1615.1 Brueghel and his workshop produced the composition in two sizes: the smaller format measuring approximately 55 x 87 cm., and the larger format, such as the present example, measuring approximately 76 x 123 cm.2 The overall design was presumably transferred from a tracing and so remains largely the same in the various versions; the caricatured faces remain consistent and the overall scene displays Brueghel’s unique talent for narrative detail. The extant versions of the composition fall broadly into two main groups: those with woven straw matting on the rear wall of the office, with dated versions falling between 1615 and 1617, and others with a dark cloth, as here, the dates of which range from 1618 to 1626.

Though traditionally this work has been variously titled The Tax Collector’s Office, The Payment of Tithes, or Rent Day, it is more likely to depict a chaotic and busy village lawyer’s office.3 An inventory of a collection from as early as 1627, for example, describes a painting on panel by the younger Brueghel as depicting een franschen procureur (a French Lawyer).3 Many of the papers, including the calendar on the right hand wall, are indeed inscribed in French, which was the lingua franca used for legal documents in the Netherlands. Unusually the source of the composition is not the work of the artist’s father Pieter Bruegel the Elder (1525-69), nor any of his contemporaries such as Marten van Cleve (1527-81) or Peeter Baltens (1527-84) and may be an invention of Pieter Brueghel the Younger himself. Klaus Ertz has proposed that the source may be a work by the French painter Nicolas Baullery (1560-1630).

Brueghel’s design depicts a crowded scene as peasants line up for the services of the lawyer, who is seated behind a paper-laden desk wearing the traditional cap of his profession. They have brought produce – bunches of grapes, dead fowl, a basket of eggs – to offer as payment, while others appear to be anxiously awaiting decisions.4 The caricature-like representation of figures may well have been intended as a means of satirising the legal profession. An engraving made after the composition, for example, was published in 1618 by Paulus Fürst for a pamphlet denouncing the corruption of lawyers, which no doubt provides a clue as to the enduring popularity of the composition.

2 See C. Currie and D. Allart, The Brueg[H]el Phenomenon, Paintings by Pieter Bruegel the Elder and Pieter Brueghel the Younger with a Special Focus on Technique and Copying Practice, Brussels 2012, vol. II, p. 672.