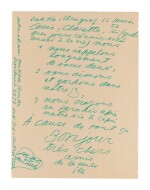 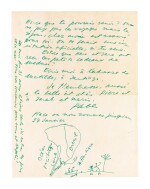 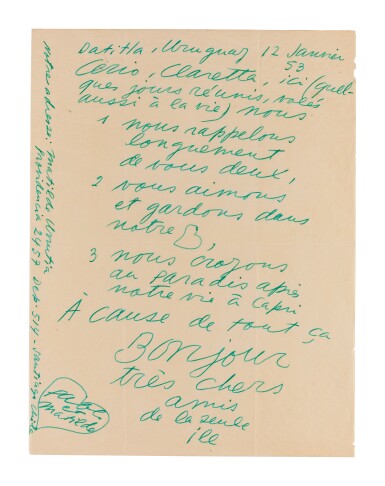 Pablo Neruda, 16 letters, together with documents, photographs and telegrams to Paolo Ricci, 1950-1953

Pablo Neruda, 16 letters, together with documents, photographs and telegrams to Paolo Ricci, 1950-1953

the autograph letters mainly in French, written to the painter Paolo Ricci in Naples (mostly 1952-1953), in red, blue and green ink, about the private publication in Naples of Los versos del capitán and his clandestine affair with Matilde Urrutia (while he was married to Delia del Carril), in which he discusses details about his exile from Chile, his love-nest with Matilde in Uruguay (illustrated with a map), his sojourn in Naples and Caprì; Neruda discusses securing the rights to "Capitan" from his publisher Einaudi, provides a list of 44 subscribers who should receive the dedicatory copies (including Matilde and their child who was never born), makes alterations to the proofs, together with documents and correspondence in Spanish with the lawyer and Hispanist Dario Puccini in 1950, concerning his libel case against the Chilean Embassy and the newspaper Il Tempo of Rome which accused him of bigamy, with a postcard-photograph of Neruda & Matilde inscribed by Neruda in 1972, and further postcards signed by Neruda and others, a photograph of Ricci and Neruda's wife Delia del Carril, together with letters by Matilde Urrutia ("Medusa"), Einaudi, Edwin Cerio and Stephen Hermlin; also included with this collection is a typescript of Neruda's sonnet 'Lo que siento al decir mi sentimiento', dedicated to Ambassador Carlos Vassallo (a recipient of Los versos del capitán), which was not published until 1995.

34 items in all, Neruda's letters 29 pages, 4to and 8vo (19 signed items in all), many with autograph envelopes, Rome, Mexico City, Nyon, Geneva, Genoa, Santiago, and 2 on in-flight KLM paper ("a bordo del avión"), "Datitla" (ie Atlántida in Uruguay) and elsewhere, 1950-1972, many on airmail paper, one letter (29 November 1951) rather faded, one letter apparently incomplete

Pablo Neruda (1904-1973) was described by Gabriel García Márquez as "the greatest poet of the 20th century in any language", and is considered the national poet of Chile. His left-wing politics put him at odds with Chilean governments in the 1950s and 1960s. Even though he had been elected as a senator for Antofagasta in 1945, by 1948 he had been forced into exile.

Neruda's retreat at Caprì with Matilde Urrutia in 1949-1951 marks an important period in his life, artistically, politically and emotionally, and later provided the inspiration for the 1994 film Il Postino. The villa, called 'Lo Studio', was lent by Edwin Cerio (included is a postcard with a ground-plan of 'Lo Studio'). Neruda thanks Cerio effusively for use of this retreat, where he and "Medusa" stayed together for the first time ("nous croyons au Paradis après notre vie à Capri"). Later, in his memoirs, Neruda was to write: "for the first time we lived together in the same house. We could never be separate again. I ended up there to write a book of love, passionate and painful, (...) Los versos del capitán". In a later letter, he writes about another love-nest, at the sea-side resort of Atlántida, east of Montevideo. This would be another shelter for his clandestine love for Matilde, to which Neruda gave the name "Datitla". Illustrated with a map, Neruda thanks Ricci for the publication of Los versos del Capitán and invites him to stay with him in Chile, and later reproaches him for not writing or responding to his payments.

The main recipient of the letters, Paolo Ricci (1908-1986) was an Italian painter and communist living in Naples, who had invited Neruda and his mistress Matilde to stay with him during his exile from Chile (where the Communist Party had been proscribed), whilst the poet's wife Delia del Carril returned home. Once in Naples, Neruda soon received the offer of a villa on Caprì from Cerio, where he was able to live secretly with Matilde for the first time, and which also produced the 47 poems of Los versos del capitán. In July 1952, Neruda published in Naples, anonymously, by subscription and with Ricci's assistance, a limited edition of 44 copies of Los versos. The first copy was to go to Matilde, and the second copy was for "Neruda Urrutia" (without a Christian name), the child they never had, of whom no further mention was ever made. In his memoirs, Neruda described this as one of his most controversial books ("The poems were written here and there along my exile in Europe...The love for Matilde, the longing for Chile, the civil passions fill the pages of this book to be kept without the author's name for many editions"). The legal letters and documents dating from Neruda's time in Mexico in 1950, written in Spanish, deal with the charge of bigamy levelled at him at the instigation of the Chilean Embassy in Rome. Neruda explains that the embassy had claimed that he had been sued for bigamy, and this had been published in the Roman newspaper Il tempo on 2 March 1950.