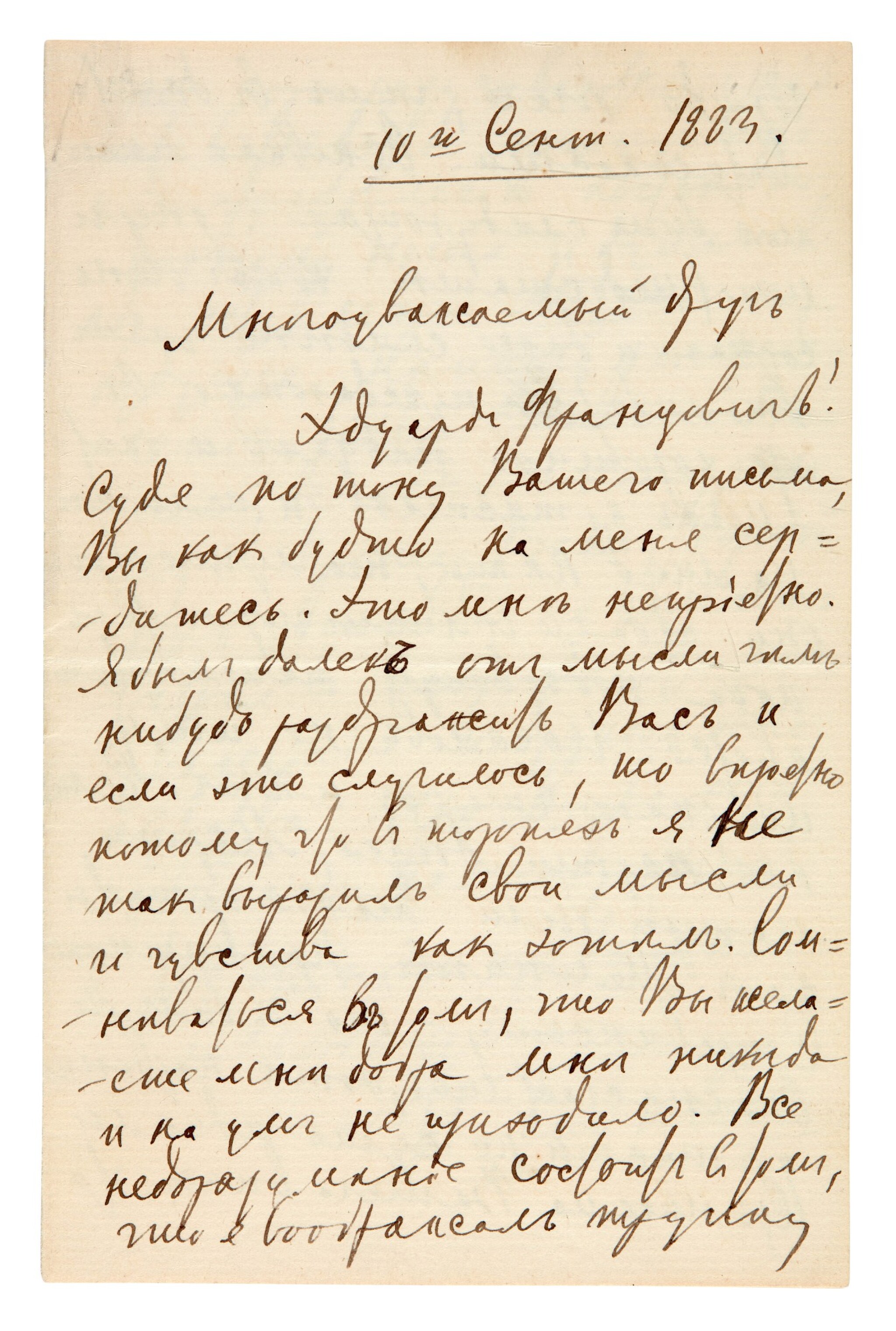 in Russian, about his dissatisfaction with the singers available for the first production at St Petersburg, discussing his demands for changes to the casting made in his last letter, about which Napravnik had taken offence, explaining that his opera requires the finest artists to ensure success, and that he would have preferred to hold back until the opportunity arises when a stronger company of singers is available; however, he can see from Napravnik's touchy response that preparations are already far advanced and that, therefore, it is better for him to accept the singers that the conductor has proposed even though they are hardly ideal, rather than putting off the impending premiere for another season

"...This misunderstanding has come about because I imagined the company to be far stronger than it actually is...[Mazepa] requires fine singers and experienced artists, and if these are unavailable, then it is better to keep it in my portfolio until suitable performers appear. If the artists [planned] for the parts of Andrey, Mariya and the mother [were as good] as Melnikov, Pryanishnikov and Stravinsky — then I should be happy enough, even though the artists chosen are not ideal...[translation].

3 pages, 8vo (c.15.5 x 10cm), autograph envelope, addressing Napravnik as the "Imperial Kapellmeister", dated by the recipient, stamped and franked, with a photographic postcard portrait, Verbovka (near Kamenka in the Ukraine), 10/22 September 1883

This letter deals with the profound disagreements that Tchaikovsky had with the leading Russian conductor of the era Eduard Napravnik (1839-1916) over the casting of Mazepa. The three-act opera is based on Pushkin's gory tale of the Ukrainian Cossack separatist Ivan Mazepa (baritone), who demands the hand of Mariya (soprano), the young daughter of his erstwhile friend Vasily Kochubey. Kochubey (baritone) refuses, and is tortured and beheaded in Act 2; in Act 3 Mariya goes mad and Mazepa, routed at the Battle of Poltava (1709), deserts her.

In an letter written ten days earlier, Tchaikovsky had expressed disappointment with Napravnik's company of singers at the Mariinsky Theatre, accepting only three of the planned cast--all named in this letter--chiefly the baritones Ippolit Pryanishnikov (as Mazepa) and Ivan Melnikov (as Kochubey), rejecting the rest and objecting particularly to the soprano lined up to sing Mariya. He told his brother Modest how offended Napravnik had been by his letter, and that the conductor had begged him not to write to the theatre cancelling the production or demanding its postponement. In the event, almost all Tchaikovsky's suggested alterations to the cast were rejected. The third singer that he names here is Fyodor Stravinsky (1843-1902), the father of Igor, who took the bass role of Orlik (Mazepa's henchman, who tortures Kochubey); he sang at the Mariinsky for twenty-six years, creating several roles in Tchaikovsky's operas.