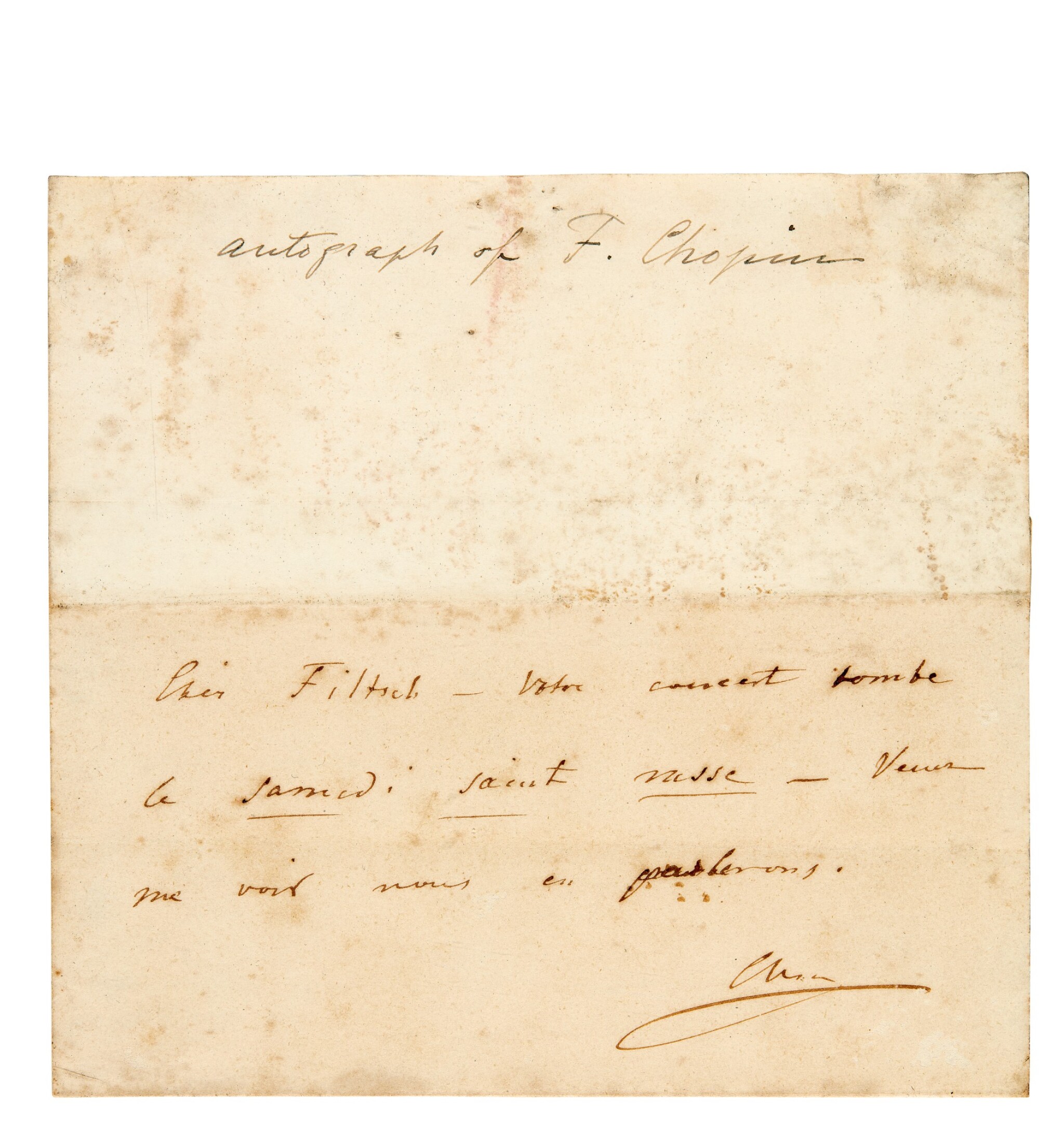 1 page, 8vo, address panel to verso ("Monsieur Filtsch"), attestation in another hand ("autograph of F. Chopin"), no place or date [Paris, April 1843], some dust-marking to folds

This would appear to be the only surviving evidence in Chopin's hand concerning Carl Filtsch (1830-1845), a musical prodigy and his favourite pupil. This note is not recorded in the Correspondance de Frédéric Chopin

(edited by Sydow & Chainaye), nor does Chopin mention Filtsch in any other known letter.

Carl Filtsch was born in Mühlbach in Transylvania, then the far eastern reaches of the Austrian Empire, now Sebes in Romania. After studying with Friedrich Wieck in Vienna, he arrived in Paris on 29 November 1841 and immediately sought out Chopin. The composer gave him piano lessons, on average three times a week, from December 1841 until April 1843, studying in particular the First Piano Concerto op.11. Chopin presented Filtsch at a number of Paris salons in January 1843, as well as accompanying him in the Concerto at Baron Rothschild's house on January 11th. Filtsch only gave one public concert in Paris, at the Salle Érard on 24 April 1843, in which he performed studies and a nocturne by Chopin, a

. This would appear to be the concert mentioned here, although Chopin stipulates Russian Easter Saturday, whereas in fact the concert took place on the Monday (Russian Orthodox Easter is later than Catholic Easter, falling on 23 April in 1843). The fifteen-year-old Filtsch died prematurely in Venice, after a brilliant series of concerts in Paris, London and Vienna during the years 1843 and 1844. Chopin was reported to have said of Filtsch:

"Mon Dieu, quel enfant! Never has anybody understood me as this child has...it's not imitation, it's an identical feeling, an instinct that makes him play without thinking as if it could not have been any other way. He plays me almost all my compositions without having heard me [play them], without being shown the smallest thing - not exactly like me [because he has his own "cachet"], but certainly not less well. [translation]", (Ferdinand Denis in Der Humorist, Vienna, 22 February 1843, p.155).

Sotheby's is happy to acknowledge the kind help of Professor Jean-Jacques Eigeldinger in preparing our description of this lot.