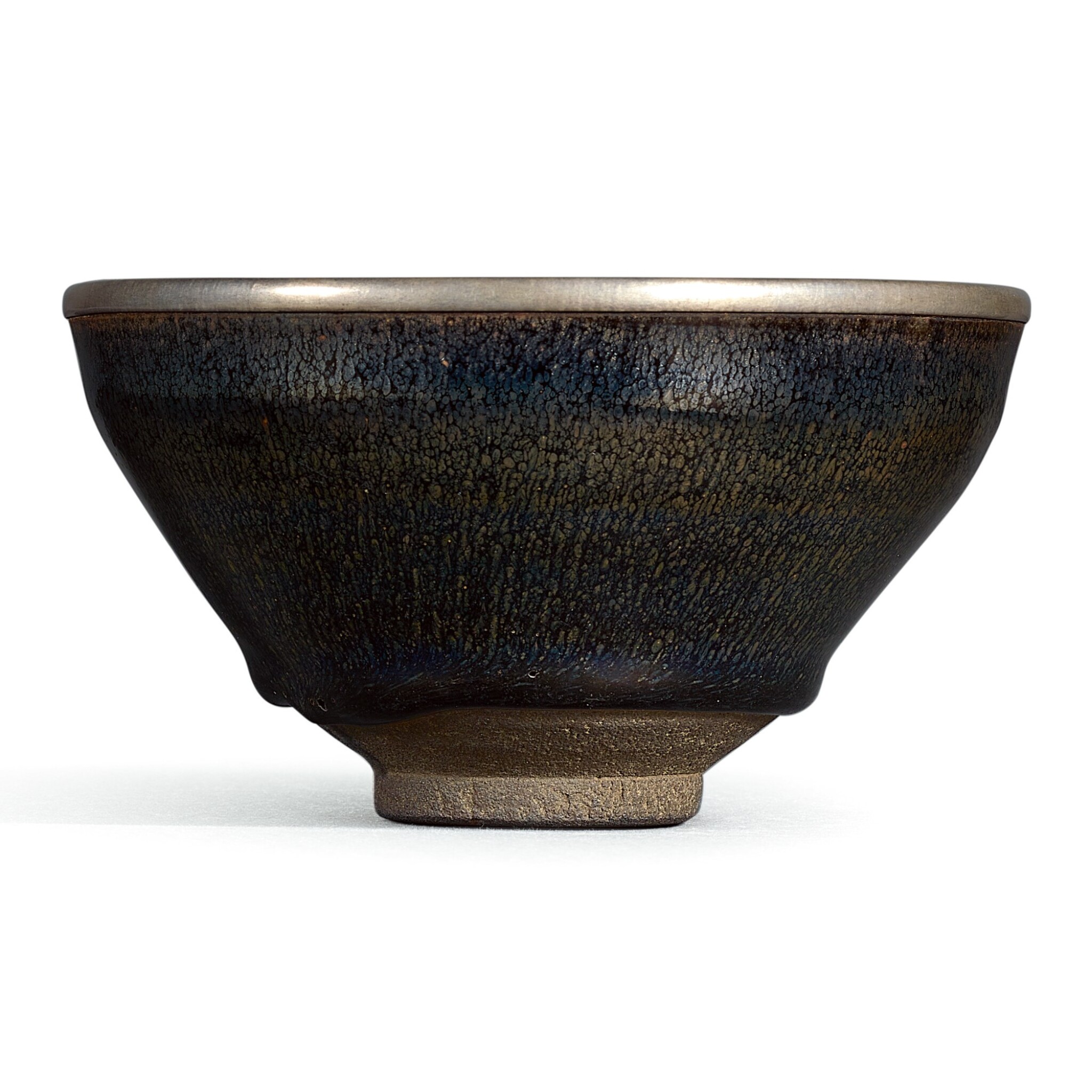 superbly potted, the deep rounded sides rising from a short straight foot to a rim indented with a thin concave groove, unctuously covered with a lustrous black glaze with iridescent silvery-blue ‘hare’s fur’ streaks, the glaze draining from the rim and falling short of the foot in a glossy black bulge revealing the dark brown body, the rim bound with metal, Japanese wood box

The bowl is in very good condition with just minor surface wear.

Nogime Temmoku with a Touch of Silver

Regina Krahl The love and connoisseurship of black-glazed tea bowls from Fujian is intimately connected with the homage paid to these ceramics by Japanese collectors and tea masters. In Japan, ‘Jian’ ware tea bowls were revered virtually from the moment they left the kilns in the Song dynasty (960-1279), and the Japanese term temmoku (or tenmoku) is now universally accepted for this group of black-glazed bowls, as lasting testimony of this reverence.

Black tea bowls were particularly appreciated in Buddhist monasteries, where tea was drunk for its beneficial effects on body and mind as well as ritually offered to the Buddha. The seemingly humble aspect of black tea bowls made them particularly appropriate in this context. The groove below the rim made them comfortable to hold, their heavy potting had an insulating effect, keeping the tea inside hot while protecting the fingers outside from the heat, and their dark interiors made for a striking contrast with the white froth of whipped tea.

In Japan, where whipped tea continues to be ritually prepared and consumed in the Tea Ceremony, black ‘Jian’ tea bowls became associated with monasteries in the Tianmu (Japanese: temmoku) mountain range in Lin’an county, north Zhejiang province, now a nature reserve renowned for its giant ancient Japanese cedar trees, visited also by the Qianlong Emperor (r. 1736-95) and still famous for its Tianmu tea. Temmoku tea bowls were probably brought to Japan together with Fujian tea by Buddhist monks visiting Chinese monasteries in the Song dynasty. They are still worshipped in Japan today, several of them having gained the rank of National Treasures.

The Jianyang kilns of Fujian, which produced nothing but tea bowls, annually supplied them as tribute to the court and the Huizong Emperor (r. 1101-1125), one of China’s greatest imperial art lovers, patrons and tea connoisseurs, is known to have been fond of them.

‘Jian’ ware became known in the West through the efforts of James Marshall Plumer (1899-1960), an American who in the 1930s worked at the Fuzhou Office of the Chinese Maritime Customs and fell in love with the black tea bowls offered in the city’s antique shops. Determined to locate the kilns, he set out in 1935 on a perilous journey to this remote and at that time dangerous rural area in inner Fujian, first travelling in his own car, which he had to abandon at the fourth river crossing, then by ferry boat, carrying on by rail, rickshaw, bus, bamboo raft, mail boat and on foot, bribing highwaymen to secure safe passage, but often stopped by floods that had carried away parts of the road or a bridge. He was the first to locate the kilns in the region of Shuiji and through his teaching and a posthumously published survey made the ware widely known, well beyond the circles of tea lovers in China and Japan (James Marshall Plumer, Temmoku: A Study of the Ware of Chien, Tokyo, 1972).

The striking black glazes can show various different effects, when air bubbles in the glaze burst, leaving a pattern of streaks, compared to hare’s fur (Japanese nogime), or spots compared to oil spots (Japanese yuteki), that can range in tone from rust brown to metallic blue. While pieces with rust-brown ‘hare’s fur’ streaks are the best known and most characteristic ‘Jian’ ware tea bowls, those with bluish ‘oil spots’ are the rarest and most celebrated. In between, there exists an endless variety of different glaze effects, for which no specific names have been coined, which determine the relative desirability of ‘Jian’ tea bowls. With its sparkling glaze interspersed with metallic silvery to coppery steaks, the present bowl is among the rarest and most highly coveted nogime examples.

A wide range of different temmoku bowls is published in Tōbutsu temmoku [Import commodity ‘temmoku’], Chadō Shiryōkan, Kyoto, 1994, including some of the finest examples preserved in Japan as well as bowls excavated in Fujian province. Among the former, most closely reminiscent of the present bowl, also with metallic shimmering, copper-coloured streaks, are bowls from the Kyoto National Museum and the Tokugawa Art Museum, pp.19ff, pls 10, 13, 15, 16. This effect of the iron-brown specks taking on this metallic sheen is so rare that it is hardly encountered among the many wasters found at the kiln site, and only a few comparable fragments are illustrated ibid., pp. 64ff., pls 47 bottom right, 48 and 61, and p. 103, reference pl. E.

The characteristic feature of ‘Jian’ tea bowls of the glaze inside having pooled off-centre, which has been remarked by many scholars, has been discussed in an article by Marshall P.S. Wu, who suggests that a deliberately oblique setting of the bowls in the saggar helped to avoid the formation of stalactiform glaze drops that might stick to the saggar (Marshall P.S. Wu, ‘Black-glazed Jian Ware and Tea Drinking in the Song Dynasty’, Orientations, vol. 29, no. 4, April 1998, pp. 22ff, figs 2-5).