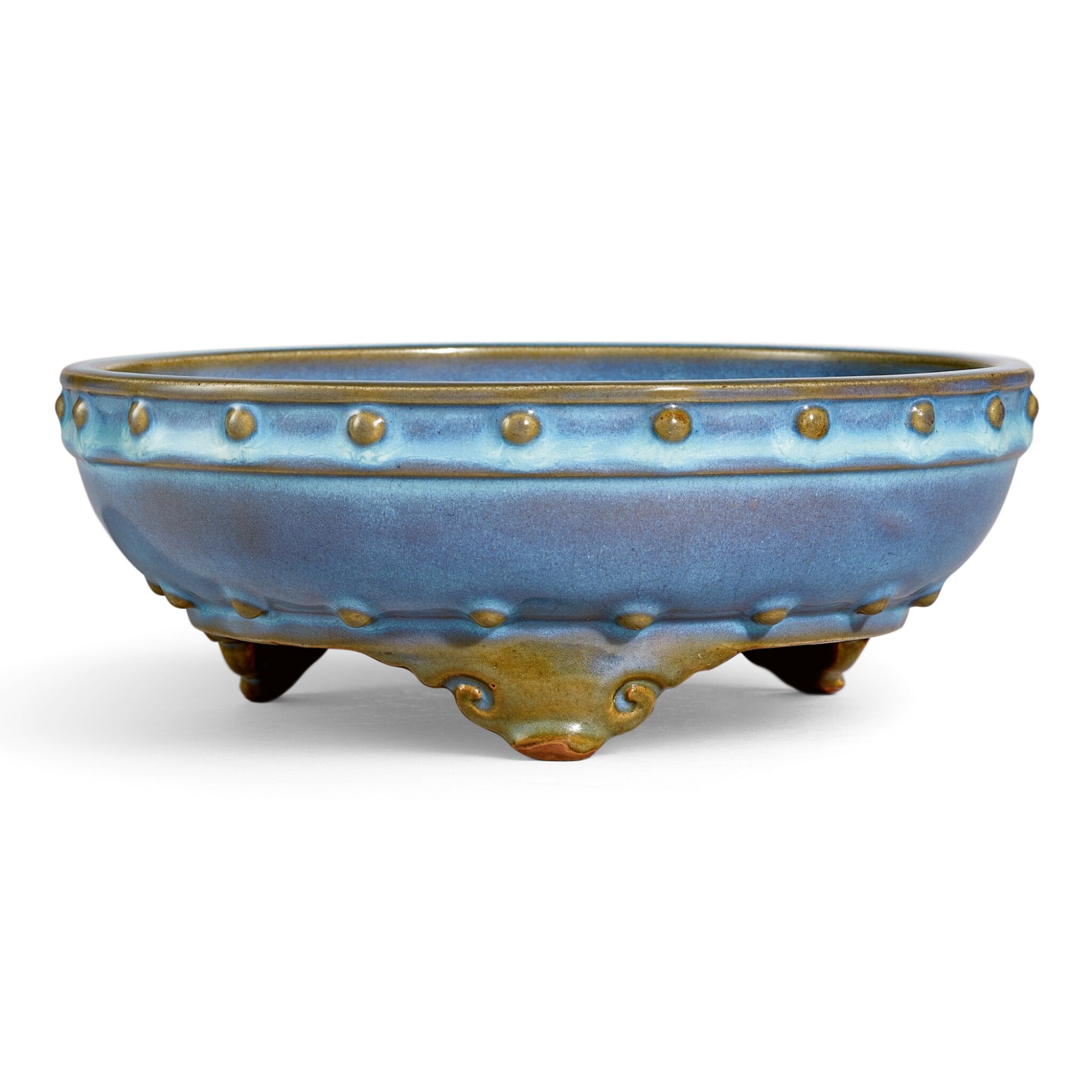 with shallow rounded sides curving down to a flat base supported on three gently flaring ruyi-shaped feet, the rim bordered with a band enclosing evenly spaced rounded studs between two narrow raised ribs, above a further band of studs above the feet, applied overall save for the base with a rich and mottled lavender-blue glaze thinning to a mushroom tone at the raised edges, the feet and base covered with a wash of olive-mushroom glaze, the latter further incised with a character er (two), surrounded by near circular spur marks revealing the pale buff stoneware body

The narcissus bowl is in good overall condition with expected light surface scratches. There are occasional minute glaze flakes to the rim and round studs.

This form of this narcissus bowl, also known as ‘drum nail’ basins, belongs to a distinct group of flower receptacles known as ‘numbered Jun’ wares, mostly made in moulds and generally inscribed on the base with numerals from one to ten that seem to correspond to the size of the vessels. This type radiates the essence of Jun ware which derived its beauty from their robust forms which were coated in a contrasting luminous thick glaze of varied purplish-blue colouration that becomes almost transparent around the edges of the vessel where the glaze thins significantly. On the present bowl the glossy glaze is reminiscent of the deep blue ocean, infused with the characteristic markings that have become known as ‘earthworm tracks'. Highly prized throughout Chinese dynastic history since their production, these striking vessels were produced in a variety of proportions and glaze colours and are found in some of the most important museums and private collections of Chinese art. The dating of these wares has been long debated and continues to divide opinions between a Northern Song (960-1127), late Yuan (1279-1368) and early Ming (1368-1644) attribution. The Northern Song date, adhered to by many eminent Chinese scholars, was supported by a surface find near the kiln sites of a mould fragment for coins bearing the Xuanhe reign name (1119-1125), made of Jun ware clay. However, at scholarly conferences on the subject in Yuzhou in 2005 and in Shenzhen in 2006, the date of the coin mould itself came under scrutiny and was basically discredited, since it was shown not to be a mould for actual coins of that period and to bear a spurious reign mark of an even earlier period on the reverse. Scientific tests of sherds undertaken by the Shanghai Museum have pointed to a late Yuan or early Ming date. A newly discovered Jun ewer very similar in shape to a gold ewer from the tomb of King Zhuang of Liang, buried in 1441, has also been offered as evidence for a later dating.

Since a large body of such Junyao wares remains in the Chinese imperial collection both in the National Palace Museum, Taipei, and the Palace Museum, Beijing, often inscribed after firing with the names of Palace halls, a Yuan date seems less likely, as virtually no Yuan ceramics formed part of the Qing court collection. The production of these flower vessels fits better into the early Ming dynasty, and they may well have been officially commissioned for the newly built imperial palace in Beijing in the Yongle period (1403-1424). Furthermore, these vessels do not appear in any pre-Ming text or painting, and their form is similar to early Ming celadon-glazed flower vessels, such as one included in the exhibition Xuande Imperial Porcelain Excavated at Jingdezhen, Chang Foundation, Taipei, 1998, cat. no. 39.

A slightly smaller bowl with the numeral er (two), but the exterior covered in a purple glaze, is in the Palace Museum, Beijing, illustrated in Selection of Jun Ware. The Palace Museum's Collection and Archaeological Excavation, Beijing, 2013, pl. 94, together with a lavender-blue glazed bowl with the numeral yi (one) and designated to be used at Zhangchun shuwu, Yangxindian, pl. 115. See also related bowls from the Qing court collection and now preserved in the National Palace Museum, Taipei, published in A Panorama of Ceramics in the Collection of the National Palace Museum: Chun Ware, Taipei, 1999, for examples, a slightly smaller purple-glazed example also with the numeral er (two), pl. 31, and similar lavender-blue glazed narcissus bowls of different sizes, pls 27, 28, 30, 34 and 35. A further blue-glazed example can be found in the Idemitsu collection, Tokyo, illustrated in Chinese Ceramics in the Idemitsu Collection, Tokyo, 1987, pl. 104; and fragments of what appears to be a smaller vessel is included in the National Museum of History publication The Ancient Kilns of Henan Province, Taipei, 2002, p. 196.

A lavender-blue glazed narcissus bowl with the numeral si (four), from the Reach Family Collection and the collection of Dr W. Kilgenberg, Bonn, was included in the exhibition Chinese Art from the Reach Family Collection, Eskenazi, London, 1989, cat. no. 24, and last sold in our London rooms, 11th November 2015, lot 81. A further lavender-blue glazed bowl from the collections of Harcourt Jonhstone and Enid and Brodie Lodge was sold in our London rooms in 1940 and 1972 and again in these rooms, 30th April 1996, lot 306. Compare also a smaller bowl with the numeral san (three) from the T.Y. Chao collection, sold in these rooms, 19th May 1987, lot 210; and a much smaller vessel inscribed with the numeral jiu (nine) but covered with a closely related brilliant blue glaze, from the J.M. Hu Family collection, sold in our New York rooms, 26th March 1996, lot 154.