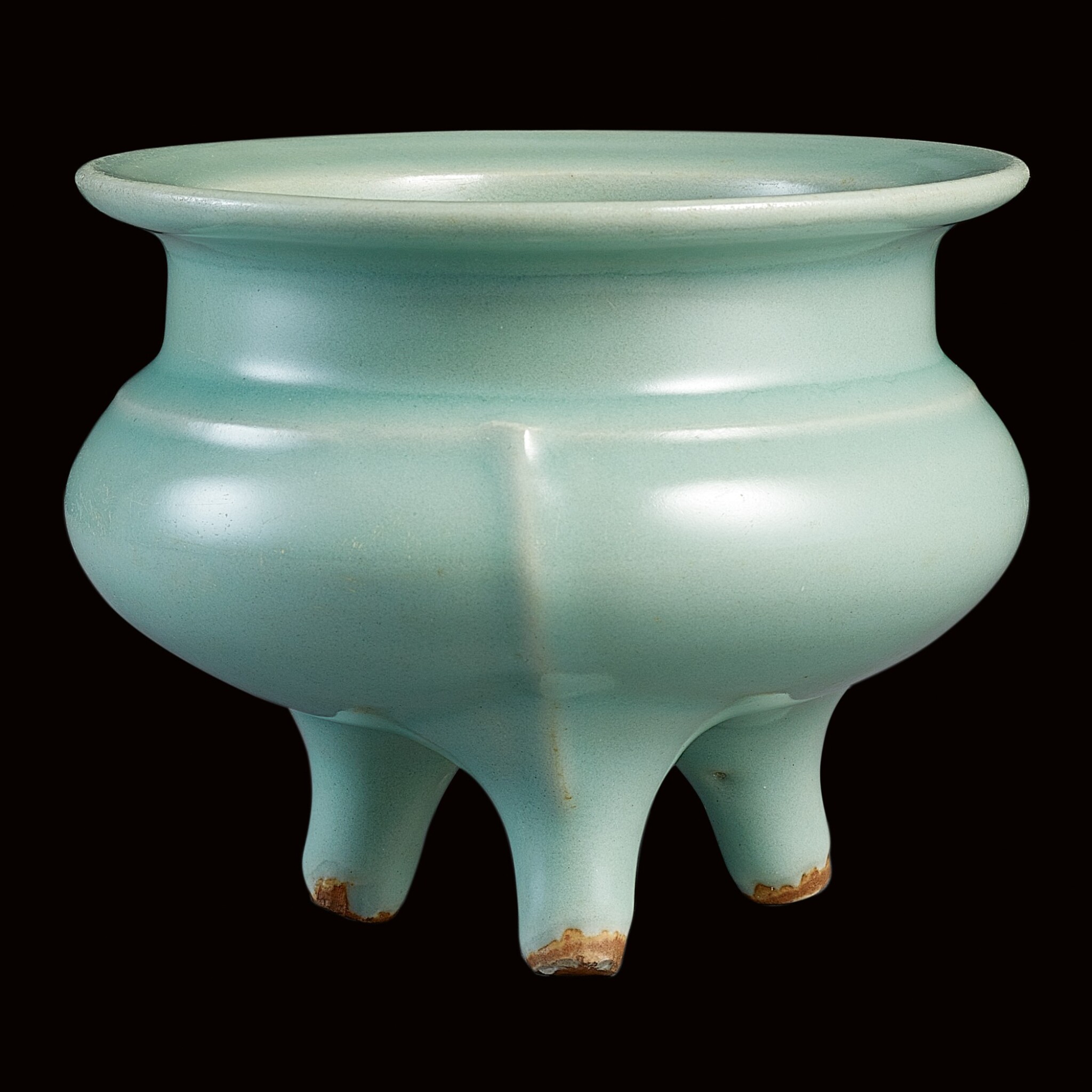 with a compressed globular body rising to a constricted cylindrical neck and flat everted rim, all supported on three slightly splayed tapering legs, the rounded exterior with three evenly spaced ridges extending from the shoulder to the centre of each leg, superbly covered with a soft bluish-green glaze stopping short of the tips of the legs and exposing the pale grey body, Japanese wood box

﻿﻿﻿﻿﻿In response to your inquiry, we are pleased to provide you with a general report of the condition of the property described above. Since we are not professional conservators or restorers, we urge you to consult with a restorer or conservator of your choice who will be better able to provide a detailed, professional report. Prospective buyers should inspect each lot to satisfy themselves as to condition and must understand that any statement made by Sotheby's is merely a subjective, qualified opinion. Prospective buyers should also refer to any Important Notices regarding this sale, which are printed in the Sale Catalogue.

THIS REPORT OR ANY DISCUSSIONS CONCERNING A LOT, ALL LOTS ARE OFFERED AND SOLD

The delicate celadon glaze and clear profile of this incense burner demonstrates the level of artistic and technical refinement achieved at the Longquan kilns during the Southern Song dynasty. Distributed in southern Zhejiang province, these kilns had been producing fine celadon wares in the preceding Northern Song period, although their popularity peaked after the move of the Song capital to Hangzhou in 1135. The support of the newly-established court and the kilns' ability to produce very fine wares, gave an unprecedented boost to the Longquan kilns. Both the court and scholar-officials that settled in Hangzhou favoured wares with seemingly modest forms but covered in mesmerising glazes with a depth of colour and tactility that resembled treasured jade. To recreate the jade-like appearance, craftsmen began replacing the traditional lime glaze used for making the celadon tone, with a lime-alkali glaze, which resulted in higher viscosity and softer gloss. The glaze was applied in multiple layers, thus appearing thick and lustrous.Longquan craftsmen were quick at adapting to the demands of the Southern Song dynasty, whose aesthetic ideals were well-rooted in Neo-Confucian philosophy. Neo-Confucianism gave rise to a centralised bureaucracy governed by scholar-officials selected through civil service examinations. A class of highly educated government officials, who displayed an increasing interest in China's Bronze Age, thus emerged. This led to a revival of antiquarianism and the study of antiques and history, which were considered a guiding principle in the pursuit of virtue. Potters at manufactories in southern China adopted these principles and introduced archaic forms into their repertoire. The form of the present censer, for example, was inspired by archaic bronze liding, food vessels with tri-lobed bodies supported on three legs.

Longquan censers of this form are held in important museums and private collections worldwide: two censers in the Palace Museum, Beijing, are illustrated in The Complete Collection of Treasures of the Palace Museum. Porcelain of the Song Dynasty (II), Hong Kong, 1999, pls 121 and 122; and one in the Tokyo, National Museum, is published in Oriental Ceramics. The World's Great Collections, vol. 1, Tokyo, 1982, pl. 97.