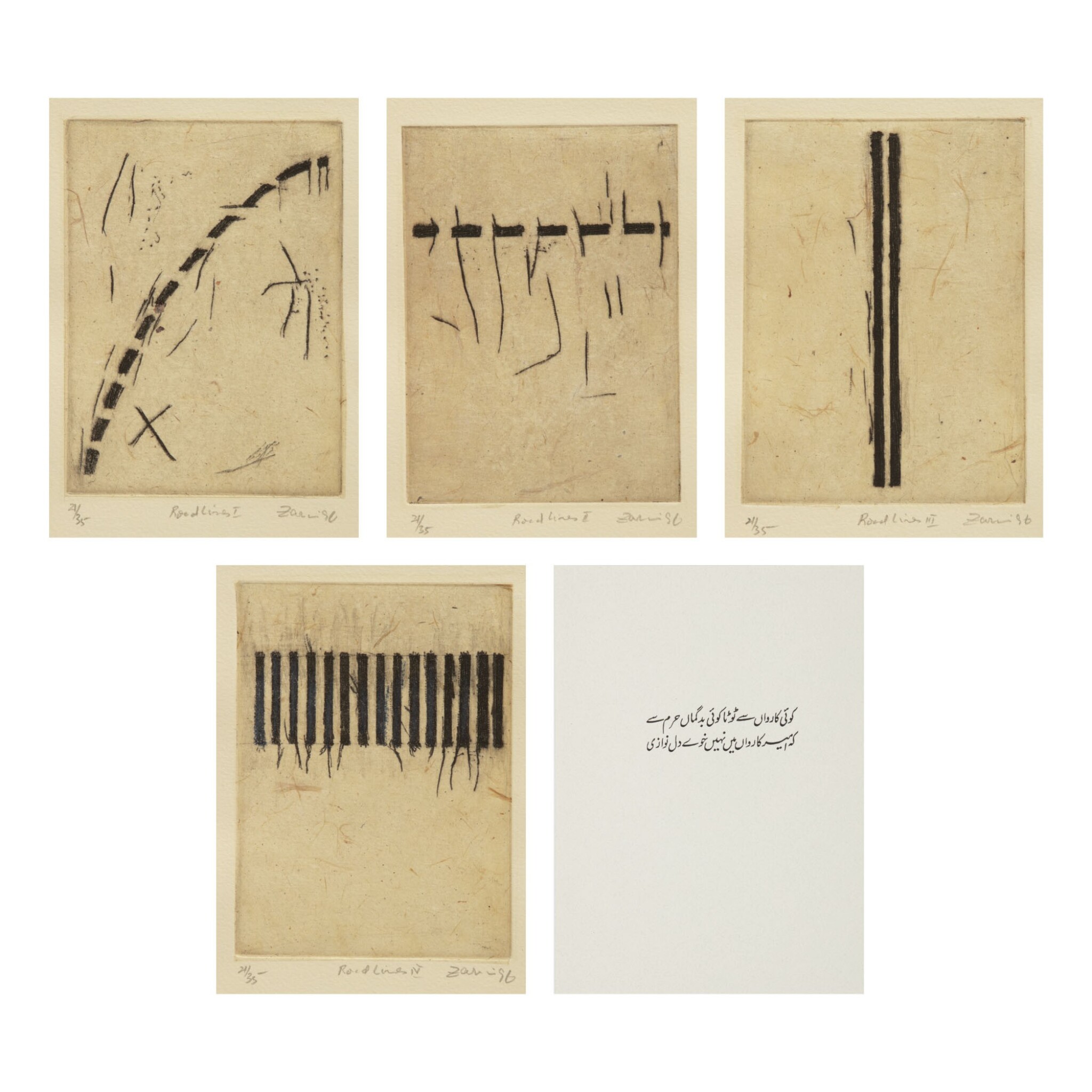 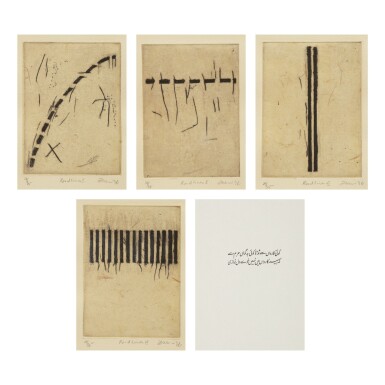 Gift from the artist circa 1996

A. Pesenti, Zarina: Paper Like Skin, Hammer Museum and DelMonico Books, Prestel 2012, illustration p. 28 and 94-97 (another from the edition)

Zarina's art is anchored in geometry and poetry. The present lot was made in the 1990s, a time when she was travelling regularly between her studio in New York and her faculty house in Santa Cruz and to Karachi to visit her aging parents.

The portfolio comprises of five etchings – four of which represent, as the title of the work suggests, various types of roads. The lines could be suggestive of a long journey whether between two coasts of America or across the Atlantic to Karachi. There is a third etching of two vertical parallel lines placed at the center of the page dividing it into two parts referring to two very different journeys. The fourth etching is a series of short black lines in a row reminiscent of a road crossing or even suggestive of the frequent trips back and forth. (J. Brodsky, ‘The Imprint of a Transnational Life,’ Weaving Memory 1990 – 2006, Bodhi Art, 2006, unpaginated) The lines do not have a beginning or an end – highlighting the journey rather than the destination. The brittle fibers of the Nepalese paper that Zarina uses here add to the aesthetics of this work – 'they blend into the image and become part of it, like random remnants retrieved from the route.' (A. Pesenti, Zarina: Paper Like Skin, Hammer Museum and DelMonico Books, Prestel 2012, p. 28)

This portfolio reflects the aesthetics of minimalism and abstraction that is the essence of all her work. All the etchings are sparsely marked – they are stripped of any ornamentation and strive to capture the essence of the feeling at hand. It also references the importance of geometry and the power of economy. This could be the result of her education in Mathematics and her exposure to both Sufi thought and Zen practice.

The fifth work in the portfolio is a couplet from an Urdu poem by the early twentieth-century poet and philosopher Muhammad Iqbal, 'One who broke away from the caravan and got disillusioned by the faith.' (J. Brodsky, ibid.) One often encounters the use of text and image together in Zarina’s works. This has roots in the illustrated manuscripts and architecture in the Islamic culture, something that Zarina would have likely internalized while growing up in undivided India. However, it also has a more personal resonance for Zarina as she often uses Urdu words which she associates with memories. (Zarina in conversation with Sandhini Poddar, ‘The Garden of Dark Roses,’ Zarina: Paper Like Skin, Hammer Museum and DelMonico Books, Prestel 2012, p. 166) The melancholic couplet perhaps refers to a sense of displacement – the resultant feelings echo her own personal sense of displacement but also more universally the feelings of all migrants who are sometimes forced to stay away from home.