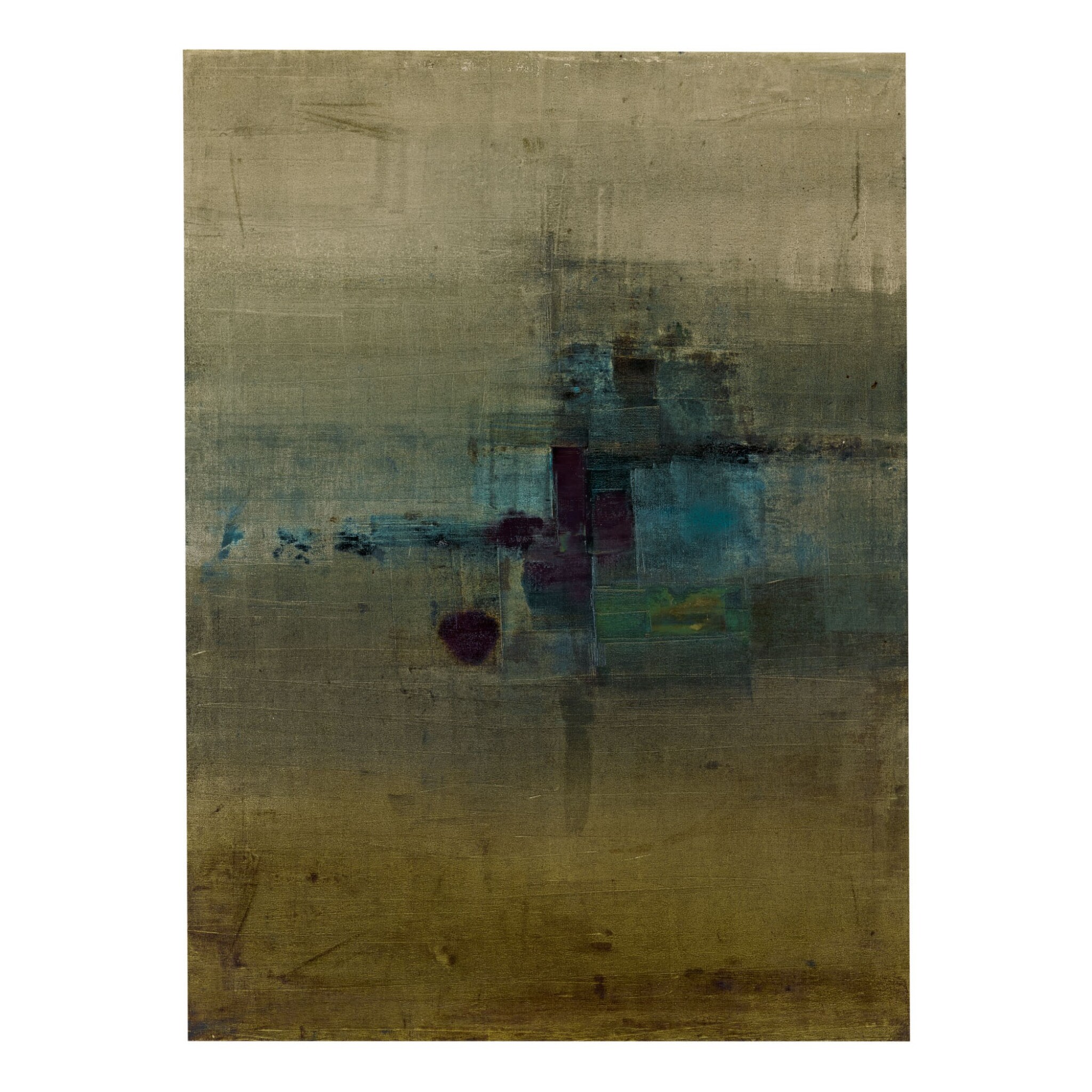 Oil on canvas board

Gifted to the current owner in 2018

Peggy and Robert Matthews were world travelers and art collectors based in the United States. Peggy was the Midwest editor of Mademoiselle magazine based in Chicago and Robert, an executive in an office furniture business. Peggy and Robert met in Chicago at a May Wine Party and married nine months later. They enjoyed a busy life together, pursuing their careers, until in 1962 Robert said, "Life is for living, let's quit our jobs and travel around the world!" He left his job and Peggy took a leave of absence from Mademoiselle. They spent months traveling across the world to exotic destinations including the Middle East, India, Pakistan, Cambodia, Japan, and Thailand. It was in December of 1963 that they met gallerist, Kekoo Gandhy and Nasreen Mohamedi in Bombay and acquired this work. An everlasting curiosity about the world, its people and a love for travel was something they shared throughout their 50-year married life. Their art collection was a culmination of their respective interests- they bought what they each liked which ranged from renaissance to modern art.

Such a feeling of space

As one moves along

Nasreen Mohamedi is celebrated today as a pioneer of a form of minimalist abstract art in India. Born in Karachi, Mohamedi trained at St. Martins School of Art in London from 1954-57. She returned to India shortly thereafter, becoming part of a community of artists, musicians, theatre directors, and others working from the Bhulabhai Desai Institute in Bombay from 1958 onwards. Among the artists there -- largely those associated with the Progressive Artists' Group, she met V.S. Gaitonde, then in the process of developing a form of abstraction that he termed non-objective. Like Gaitonde, Mohamedi had an interest in Zen, mysticism, and elemental non-Platonic thought, and he became a mentor.

In these years Mohamedi briefly explored a linear expression of the figure, though she was never interested in representational likeness. As was then the prevailing medium in India’s post-independence art world, she worked through her ideas in oil on canvas for a short time while beginning to hone her focus on the line. Canvases such as the present work show clearly her indebtedness to Gaitonde in its commitment to abstraction and composition, though -- as Roobina Karode has pointed out in her eloquent ode to Mohamedi -- while Gaitonde was preoccupied with color, Mohamedi’s concerns tended towards line even from the beginning of her engagement with abstraction. (R. Karode, ‘Waiting Is a Part of Intense Living,’ Nasreen Mohamedi: Waiting Is a Part of Intense Living, Museo Nacional Centro De Arte Reina Sofia, 2015, p. 24.) Karode suggests further that both artists’ work in this period reveal their proximity to the sea -- physically so, as the Bhulabhai Desai Institute was adjacent to the Arabian Sea, and for Mohamedi emotionally, as the water was a lifelong source of joy and introspection. Karode suggests that for Mohamedi this closeness can be seen through the texture of her painted canvases in the early 1960s, a notion that lends perhaps also to the possibility of reading her works in this period and subsequently through the lens of landscape (as Gaitonde’s surely could be).

While still evincing opaque and somewhat gestural lines, the present work anticipates the delicate graphite drawings for which Mohamedi is best known. Rather than ready-made mechanical or geometric forms that could be replicated or extended infinitely beyond the picture plane, those drawings always show fine traces of Mohamedi’s hand moving over the paper and compositions are contained within the frame. In that way, this work is a significant antecedent in showing how the artist developed her humanistic approach to the grid in the years before she turned nearly exclusively to this form. This can be seen especially in Mohamedi’s choice to use vertical and horizontal axes to structure the canvas. Mohamedi nearly separates the canvas into four quadrants but challenges this structure by breaking the horizon line in a way that creates a sense of visual balance and tension between the left and right halves of the canvas. These lines draw the viewer’s attention first to the center of the canvas and then outwards, a visual effect not unlike Mohamedi’s drawings. And as with the compositions of her later drawings, three of these axes end before the edges of the canvas, while the horizontal line seems to dissolve into the rightmost edge of the canvas with great precision. While her forms in this painting and later drawings are always rigorous, they remain deeply humanistic and personal in a way that many modern artists exploring geometry and the grid expressly tried to avoid.

Mohamedi’s abstraction has often been linked to Western minimalism and to an Islamic aesthetic of abstraction, as she was born Muslim (and with Zarina Hashmi, and Rummana Hussain, among the first few trailblazing Muslim women to establish careers as professional artists in India and abroad in this period). While certain dimensions of her practice, especially introspection and a rejection of representational likeness, align with Islamic thought, Mohamedi’s abstraction arises from a deeply individual questioning of consciousness, nothingness, and the void. In this way, a lifelong desire to reduce her work to its essence also departs significantly from the central ethos of Euro-American minimalism, which grew largely out of formalist preoccupations, particularly a rejection of the gestures of Abstract Expressionism and handmade objects. The inadequacy of these explanations to understand Mohamedi’s work underscores the complexity, fineness, and exceptionality of her practice, including vis-a-vis the extended predominance that the figure had among artists in India through Mohamedi’s life.