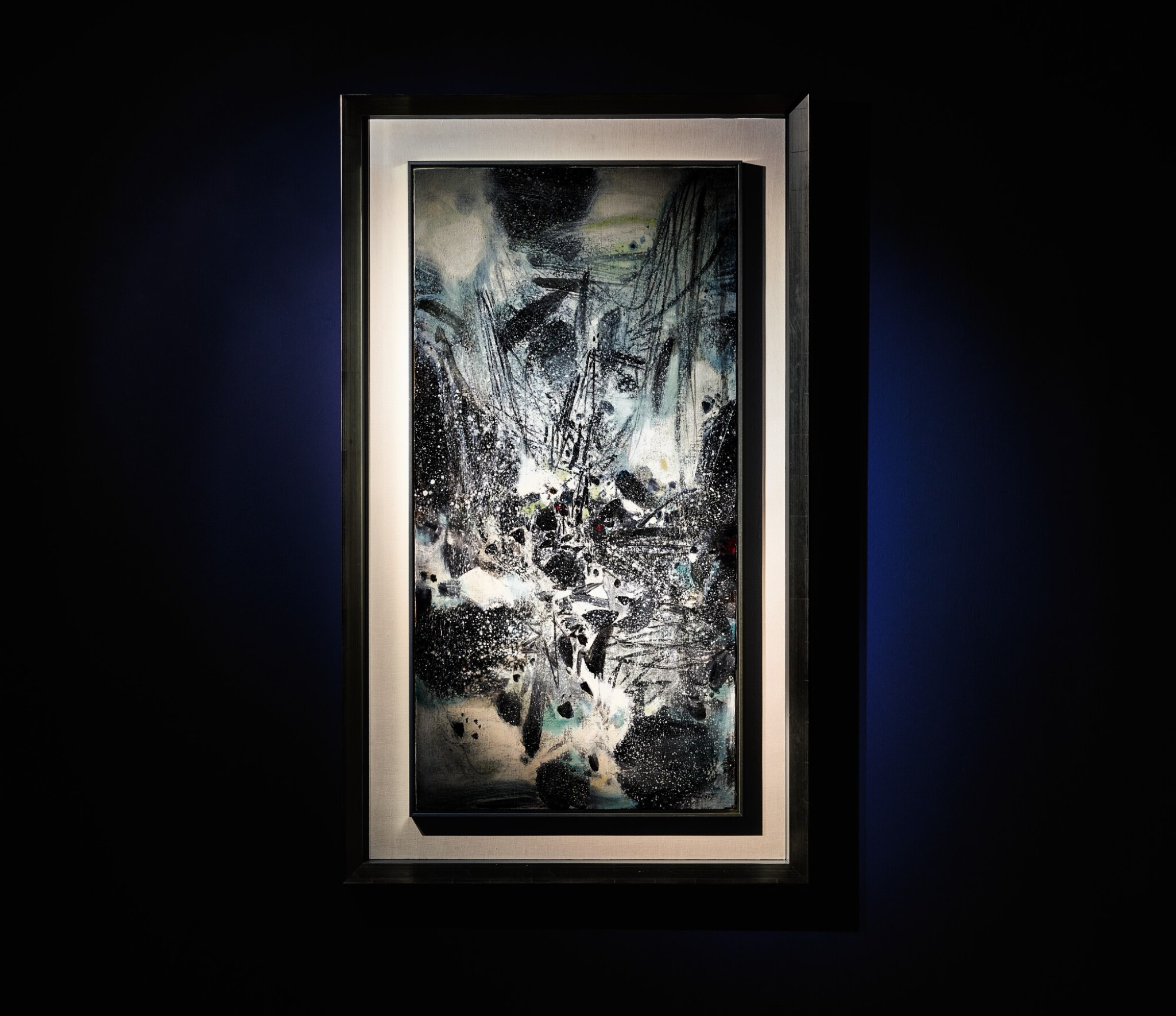 signed in Chinese and Pinyin, dated 87; signed in Pinyin and Chinese, dated 1987 and titled in French on the reverse

Galerie Arlette Gimaray affixed to the stretcher on the reverse

The work is overall in good condition.

Upon close inspection, there are minor signs of hairline craquelure predominately over the white painted areas, all of which appear to be in stable condition.

Examination upon UV light reveals no signs of restoration.

Chu Teh-Chun reached his artistic peak in the 1980s, perfecting the combination of Eastern and Western traditions in works that would constitute his creative golden age. In 1987, Chu Teh-Chun held a large retrospective at the National Museum of History in Taipei, marking his formal return to the Asian art world after having lived 32 years abroad starting in 1955.

Transparence glaciaire (Lot 1025) ,one of the best works in his series of snowscapes, was painted in this important year.

Chu painted snowscapes from 1985 to 1990, and the series originated with a solo show that he held in Switzerland in 1985. During his travels, he was inspired by the magnificent peaks of the Alps, which gave the works he made soon thereafter a decidedly different kind of charm. Decades before he began his snowscapes, Chu had already reached two important turning points in the development of his abstract art, both sparked by the works of earlier artists. Chu Teh-Chun was deeply impressed when he attended a retrospective for abstract painter Nicolas de Staël in 1956, it was after this that he made his first push toward abstraction. In 1969, Chu went to Amsterdam to view an exhibition held in honour of the 300th anniversary of Rembrandt’s death. He gained new insight on chiaroscuro techniques from these classical oil paintings, which prompted another shift in his abstract art. Chu’s snowscapes could be considered his third major creative breakthrough. Northern Song landscape master Fan Kuan once wrote, “It is better to learn from nature than from the ancients.” Nature was a decidedly different source of inspiration than his two earlier revelations. Transparence glaciaire, one of his snowscapes, is bursting with tension, conveying the surging power of nature. With Chu’s formal return to Asia, the ink effects of his snowscapes gained in vigour. Although he was painting the series in oil, the effect resembles ink painting as it suggests the influence of the Zen aesthetics and concept of ‘leaving empty space’ in traditional Chinese ink painting.

The back of Transparence glaciaire bears a label from Galerie Arlette Gimaray, which held solo exhibitions for Chu in 1989 and 1992. This painting was likely shown in the earlier 1989 exhibition, as the 1992 show focused on his work from the 1960s. In 2000, French art critic Pierre Cabanne edited an important catalogue for Chu with the long-standing Parisian publishing house Flammarion. Chu greatly valued this book, which contained Transparence glaciaire, thereby demonstrating the significance of this work for the artist.