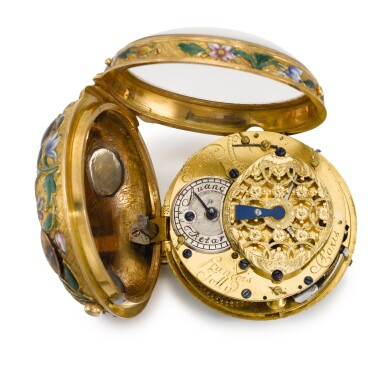 Dial: with chips around the winding hole but overwise in good condition

Case: some cracks to the enamel decoration. Scuffs to the glazed cover.

Movement: running at the time of cataloguing. Strike mechanism struggling to work, does strike the hours and quarter but very slowly.

Chatelaine: some areas of damage to the enamel decoration. Pendant bent slightly and heavily scuffed. Discharge and countermarks to the pendant of Julien Berthe, Paris 1750-56

François-Antoine Jolly, son of Claude-Hector and Elisabeth Codolas, aged 10 years, was apprenticed to his uncle, the marchand-mercier Jean Jolly, on 8 May 1718 for a term of 6 years (Archives Nationales, MC/ET/XXIII/432). He was described as ‘ouvrier libre’ in 1737, the same year that he married Marie-Anne Gribelin at the church of Saint-Barthélémy. Jolly was received master in 1747 and was established in the Place Dauphine the following year.

The case maker Joseph Quétin became master on 5 May 1742 and is recorded as working in the rue de la Huchette in 1743 and the place du Marché Neuf in 1747. He retired to his birthplace, Châtillon-sur-Loire, in 1772 giving up his maitrise officially in 1775. He supplied cases to numerous Parisian watch makers including Julien Le Roy, J.B. Baillon, F. Baillon, Chalon, Du Four and J.J. Gudin as well as to François-Antoine Jolly. For further watches by Jolly with cases by Quétin decorated with flowers in relief, see an example of 1749 (Sotheby’s New York, Masterpieces from the Time Museum, Part II, 19 June 2002, lot 40) and another of 1750 (Dr Crott, 14 November 2015, lot 530).

The raised floral enamel and moss agate decoration on both this watch case and chatelaine are closely related to two gold boxes by the celebrated Paris goldsmith, Jean Ducrollay. The first, now in the Louvre, dates from 1750/52 and is rectangular. The ground has the same dotted diaper ornament as the present watch case and is decorated with similar raised painted opaque enamel flowers with green basse-taille leaves and stems and is set with similarly well-chosen oval moss agate panels.1 The second, in the Wrightsman Collection at the Metropolitan Museum, dates from 1749/50 and is also rectangular. The ornament is again very similar although instead of agate panels there are now miniatures of the French royal family, generally agreed to be later replacements.2

Although no objects decorated in this way are signed, two names were associated with this type of raised enamel decoration in the 18th century, that of Joaguet and that of Aubert who appear regularly in contemporary sale catalogues and commentaries. Joaguet appears to have been working somewhat earlier, from the 1730s, whereas the better-known Louis-François Aubert (1721-1755) is actually recorded in the Menus Plaisirs as having decorated a box supplied to the King by Jean Ducrollay in 1751. The box was described as ‘une boîte d’or, émaillée par Aubert, à fleurs de relief, fond mat à mosaique …’.3

As Jean-Dominique Augarde described in Les ouvriers du temps,4 ‘the principal manufacturers of watch cases in Paris, were not the goldsmiths, the only craftsmen, one might assume, entitled to work with precious metals … [but] …certainly since the foundation of the guild in 1544, master clockmakers were entitled to make the cases destined to contain the mechanisms of which they were the authors … in theory, all clockmakers could make their own watch cases. In actual fact, only a very few masters carried out this task on commission from their colleagues’. These case makers (monteurs de boîte) were, however, subject to many of the same rules as goldsmiths since they worked with silver and gold. The most important of these were that they had to submit pieces for taxation and before that they were required to register a maker’s mark. In 1734, the shape was changed to distinguish case makers’ marks from goldsmiths’ and was required to be their initials surmounted by a six-toothed cog wheel. Unlike in Geneva where the number of professional case makers was so large they instituted their own guild, in Paris the numbers remained low: 10 in 1739, 12 in 1753, rising to 19 in 1772 before declining again. In fact Paris case makers only worked on the most expensive watches, for cheaper ones the cases were imported from Geneva. Inevitably in order to produce complete chatelaines to be retailed by a Paris marchand-mercier, they worked in conjunction with goldsmiths, using the same designers, engravers and enamellers.

In the present example, the watchmaker François

Antoine Jolly used Joseph Quétin whose mark appears on the case together with an incomplete numeral (6[?]3), to make the case. The matching chatelaine is struck with the Paris date letter and the discharge and counter marks of Julien Berthe (1750-56) but lacks a maker’s mark. We know that Jolly provided clocks and watches to the celebrated marchand-mercier Lazare Duvaux. Indeed Duvaux’s account book records that on the 28 November 1750 he supplied the dowager countess d’Egmont with a very expensive gold watch and chain enamelled in relief, the movement by Jolly, at a cost of 1700 livres. We know also that Jean Ducrollay supplied Lazare Duvaux with gold work around the same date. It is therefore not inconceivable that the present chatelaine originated from the workshops of Ducrollay working in conjunction with Quétin, given the similarity of decoration to the Louvre and Metropolitan Museum snuff boxes. It is probable that the enameller of watch case, chatelaine and boxes was Louis-François Aubert and it is possible that the original design also came from the Ducrollay workshops given that the album of the Ducrollay workshop in the Victoria and Albert Museum includes many examples of designs for chatelaines complete with watch cases.5

We would like to thank Julia Clarke for her help with the cataloguing and research of this watch.