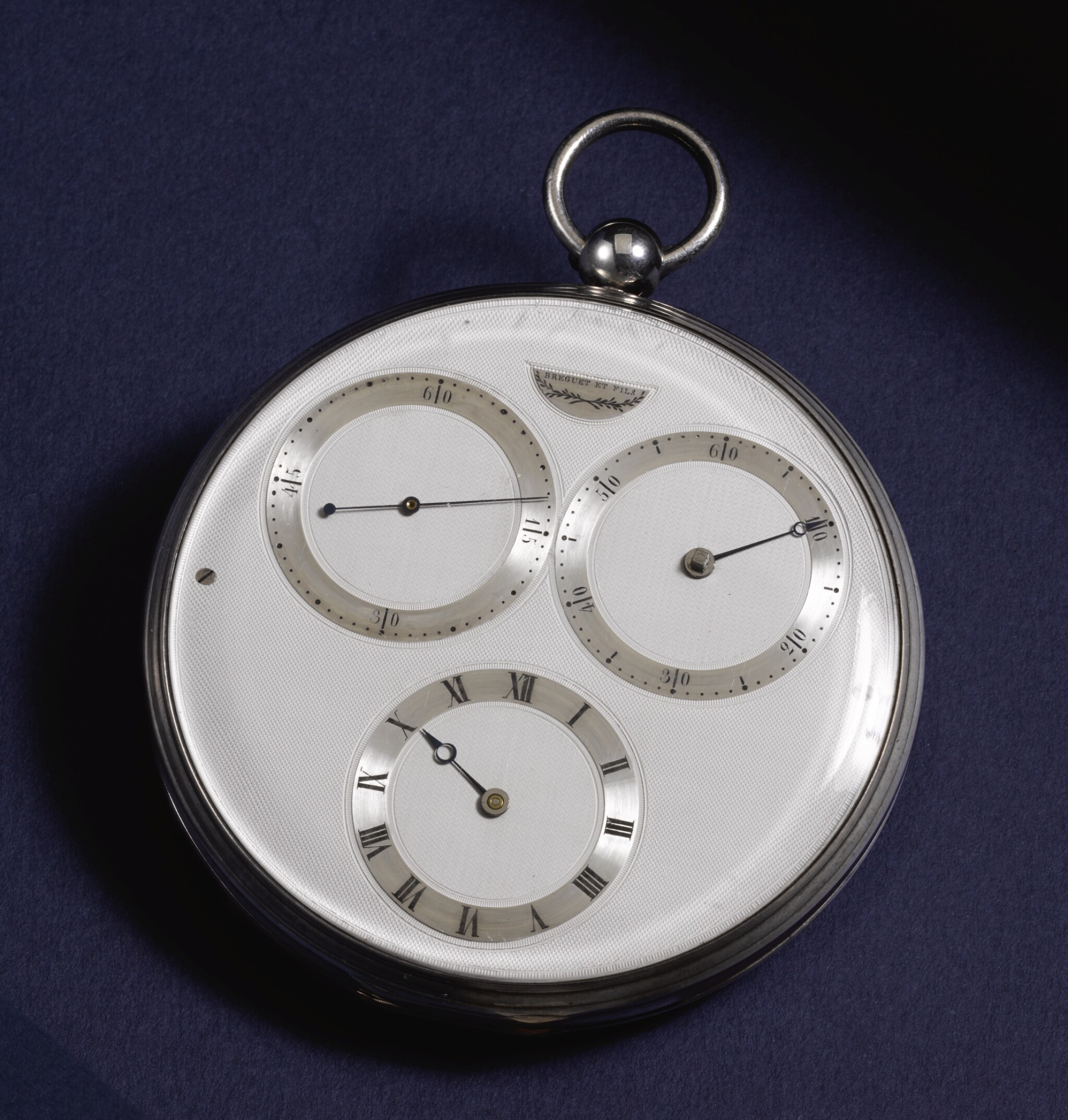 • Case: silver case, gold hinges, the back with later presentation inscription from the original owner reading "To Colin Lamont Jr. Esqr. from Sir Thomas Makdougall Brisbane, Bart, in testimony of his sincere esteem and regard, Greenock, 16th July, 1856", case back with maker's mark AG beneath a star for Ami Gros and Paris silver hallmarks for 1808-19 stamped B 2574, and numbered 287, polished silver cuvette with aperture for winding, engraved Regulateur à Tourbillon, Breguet et Fils, no.2574, Paris control mark for 1793 onwards

Movement: running at time of cataloguing and visually appears in good aesthetic condition however would probably benefit from a service.

Case and cuvette have been polished in the past but all engravings remain clear.

The importance of Abraham Louis Breguet's contributions to the field of horology cannot be overstated. After building his reputation on refining and perfecting the perpétuelle watch (see lot 28), Breguet went on to invent several innovative escapements, including the tourbillon. Breguet's reputation as an inventor and watchmaker afforded him royal and aristocratic clientele across Europe, including Marie Antoinette, Napoleon and Josephine Bonaparte, Tsar Alexander I, and both King George III and his son, King George IV.

Perhaps one of Breguet’s most iconic inventions is that of the tourbillon. Invented in 1795 and patented in 1801, the tourbillon compensates for the effects of gravity by suspending the escapement in a revolving carriage. Thus its position constantly changes, averaging out the fluctuations in rate caused by gravity and leading to a more precise timepiece. Breguet went on to build tourbillons whose carriages rotated at different speeds, including the one-minute tourbillon, the four-minute tourbillon, and the six-minute tourbillon, as seen here.

Lastly, the balance in the present piece rotates at an exceptional rate of 21,600 vibrations per hour. While many comparable pieces at the time normally rotated at 14,000-18,0000 per hour, the higher rate seen here results in a balance less affected by the inherent movement of the watch while being worn, and therefore leads to greater accuracy. While normally this would have meant the use of a stronger mainspring, Breguet avoided this by slowing down the rotation of his tourbillon carriages to four minutes, or six minutes, as seen here.

Breguet sold the present lot to Sir Thomas Makdougall Brisbane (1773-1860) in 1816. Born at Brisbane House in Ayrshire, Scotland, Brisbane joined the army where he served in Flanders, the West indies, the Iberian Peninsula, and North America before eventually becoming the Governor of New South Wales in Australia from 1821 to 1825. During his four year tenure as Governor, Sir Thomas worked to reform the currency and land grants system, and supported freedom of the press. Due to the rapidly expanding population, he sent out exploring parties, one of which discovered Brisbane river, which was named after him. The settlement that grew up around the river, also names Brisbane, is now one of the largest cities in Australia.

Sir Thomas was an avid astronomer throughout his life. Inspired by a near-shipwreck during his time in the army, he took it upon himself to learn navigation and nautical astronomy. He established two observatories in Scotland, as well as the first one ever built in Australia. Upon his return to Scotland in 1825, he established the Makerstoun observatory, where astronomers began making important magnetic observations in 1841. These results gained him the Keith prize from the Royal Society of Edinburgh in 1848. He was elected president to the Royal Society in 1833 and in the following year he acted as president of the British Association. In 1836, he became a baronet, and he went on to found two gold medals for the encouragement of scientific research.