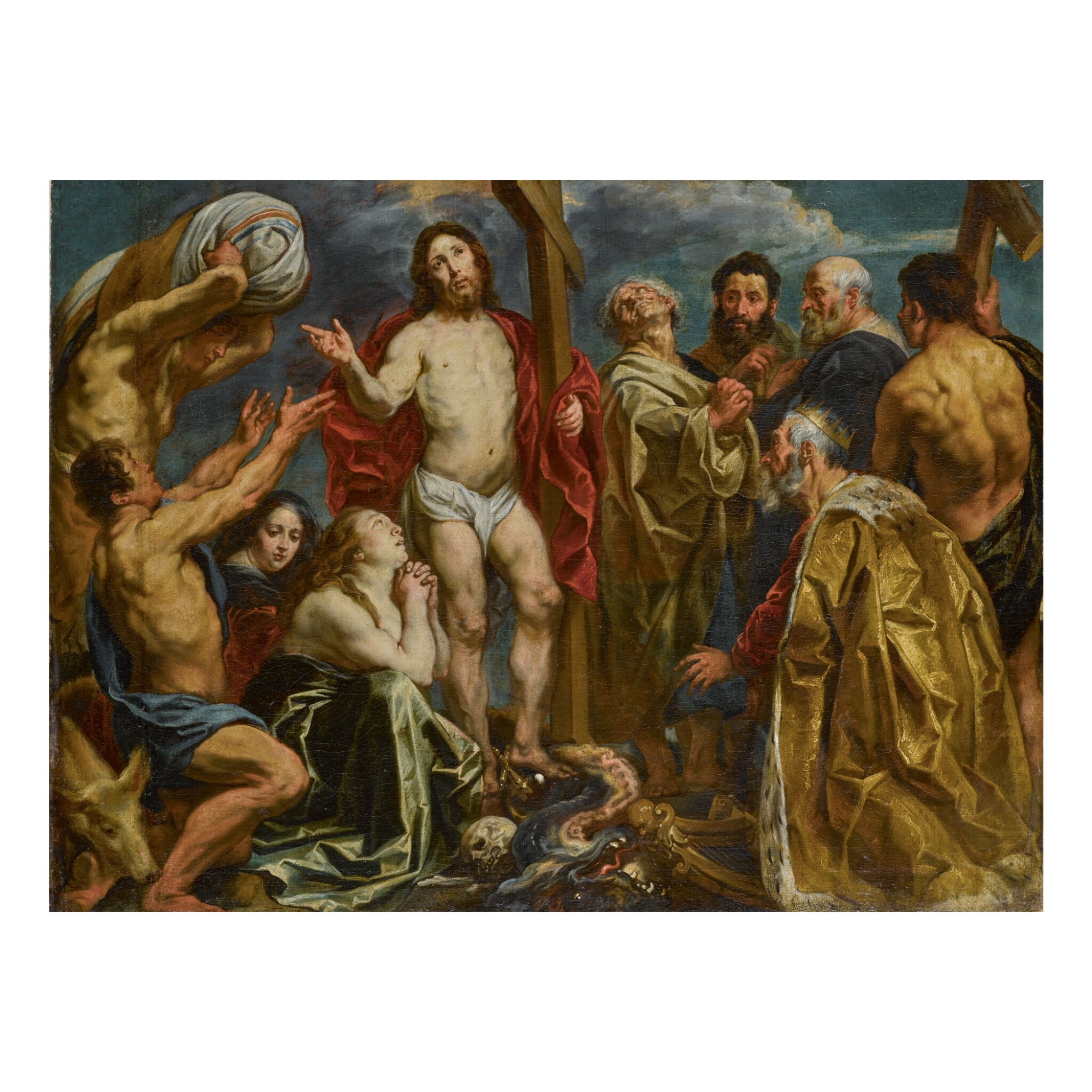 CHRIST TRIUMPHANT AMONG THE NINE PENITENTS

This work is well restored. The canvas has a lining applied with a non-wax adhesive which is still effective. The texture of the paint layer remains very lively and uncompromised. There is an original vertical canvas join running about 3 inches from the left side. The retouches along this join could be slightly improved. The remainder of the picture shows very few retouches of note, and there do not appear to be any structural damages. There is an attractive visible patina to the paint layer.

This large, impressive canvas by the Flemish Baroque artist Jacob Jordaens is teeming with energy, color, and the figural form. Like his predecessor Peter Paul Rubens, in this painting, Jordaens showcases his skills in capturing the beauty of the human form, with the flesh tones serving as pleasing contrasts to the opulent fabrics that further enliven the packed and dynamic composition. At the center appears Christ, triumphant over sin and death, whose pose and muscular physique not only serve as the focal point, but also seem to have been inspired by the figure of Christ in Rubens’ Glorification of the Eucharist, an oil sketch of circa 1630-1632 in the Metropolitan Museum of Art. He is surrounded in the present work by nine penitents: to the left, the paralyzed man carrying his bed on his neck, the Prodigal Son, Mary Magdalene, and the Woman of Samaria; to the right, Saint Peter, the Tax Collector, Judas Taddeus, the good thief with his cross, and the crowned King David kneeling in the foreground. Such a pedagogic theme, imbued with the doctrine of Redemption and devotion, would have been easily recognized by the Catholic reformed society in Antwerp during this period.

In addition to his skills as a painter, Jordaens was a prolific draughtsman, and this canvas can be securely linked to a number of his autograph drawings, including a study of a kneeling man in a pose similar to that of King David1 as well as a sketch of a pig that relates closely to that found in the lower left corner of the present work behind the Prodigal Son.2 But perhaps the most important drawing of this group, perhaps preliminary in conception, is one of the same subject today preserved in the Kupferstichkabinett der Staatliche Museen Berlin.3 An inscribed date on the reverse of that drawing reads 1629, a date that Michael Jaffé suggested as the approximate date for the present work when it first appeared on the market in 2005. A slightly later date of circa 1635-1640 has more recently been suggested.