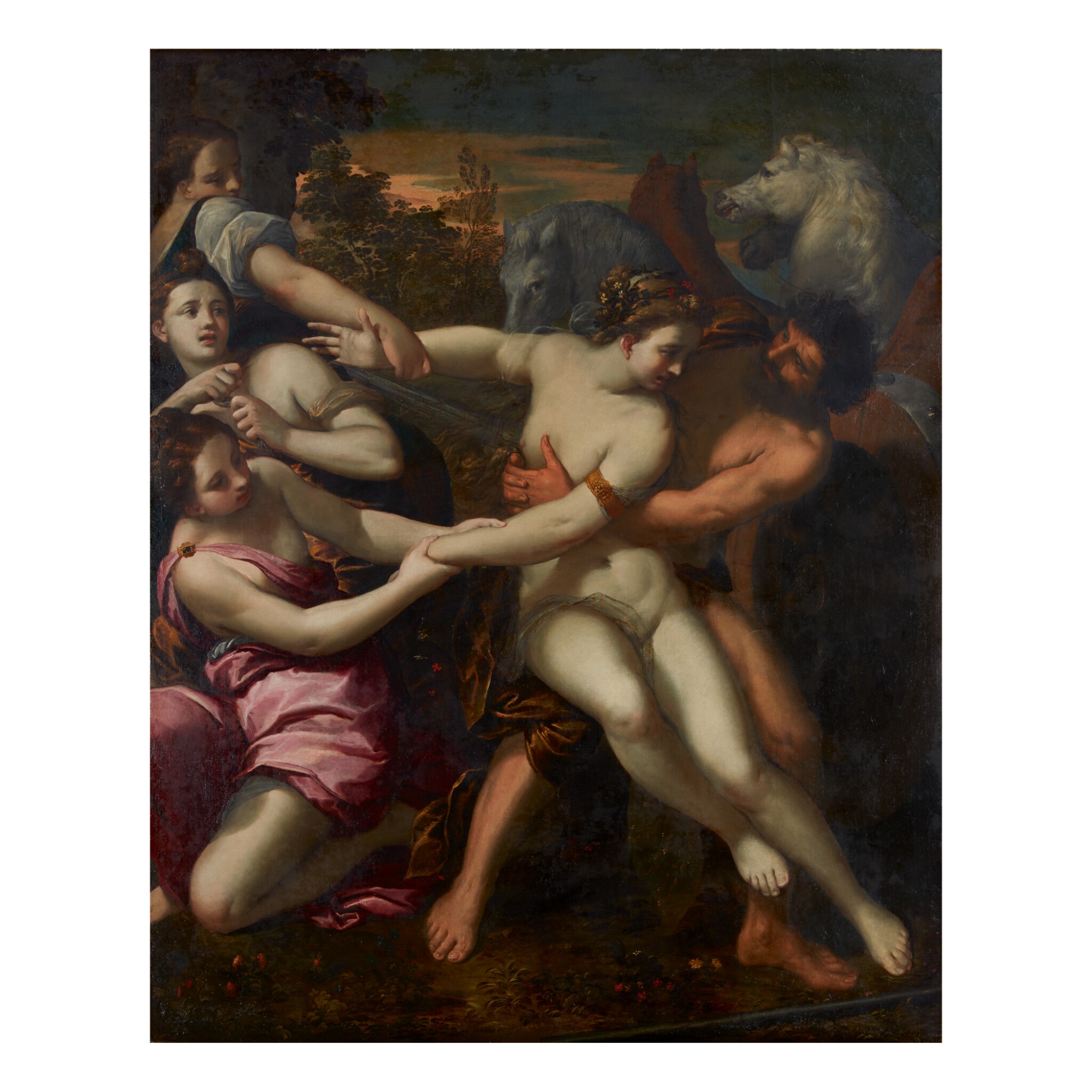 This work is well restored. It has a lining which seems to be applied with wax as an adhesive. The painting is painted on two pieces of canvas, with an original join running vertically about 12 inches from the right edge through the nose of the male figure on the right. The paint layer is stable. It is clean, retouched and varnished. The varnish has become quite dull and could be freshened. There are some recent losses in the hair of the woman in the center of the left side and on the edge beneath this. The retouches are extensive, particularly within the lighter colors of the figures, but they are also numerous in the background. However, the work looks well, and if the varnish were freshened, it could be hung in its current state.

This dramatic mythological scene dates from the late mature period of Scarsellino, the leading Ferrarese painter of the late 16th century. The range of colors and shades, the plasticity of the human form, and the use of the tip of the brush to add small details to the costume and landscape are all characteristic of Scarsellino's most accomplished works. The large format and almost life-size figures pushed to the front of the picture plane involve the viewer in the struggle taking place, where Persephone’s maids and Hades are engaged in a type of dance as they fight over her.

As told in Ovid (V, 385 - 437), Persephone, daughter of Demeter, the goddess of the harvest, caught the eye of Hades, god of the underworld. While she was picking flowers with the Oceanids along the Pergo River, he arrived in his chariot and captured her in order to make her his eternal bride, with the permission of Zeus. Demeter was distraught at the disappearance of her daughter and searched for her all over the earth, neglecting the land and allowing nothing to grow while Persephone remained lost. Finally Zeus pressured Hades to return Persephone to her mother so that the earth would produce a harvest, but Hades tricked Persephone into eating a pomegranate, food of the underworld, before her return. After having tasted the food of the underworld, she was forced to remain there for part of the year, and in Ovid’s telling it became half of the year. Thus the earth was cold and barren during Persephone’s absence, resulting in autumn and winter, and sprouted life again when she returned to earth in spring and summer.

Though the early provenance of this painting is unknown, the mythological theme and life-size nude figures point to a noble or at least very wealthy patron in Ferrara. The landscape recalls the coloration of Titian and Tintoretto while the sculptural figures with classical proportions and poses look forward to early baroque treatments of this subject.