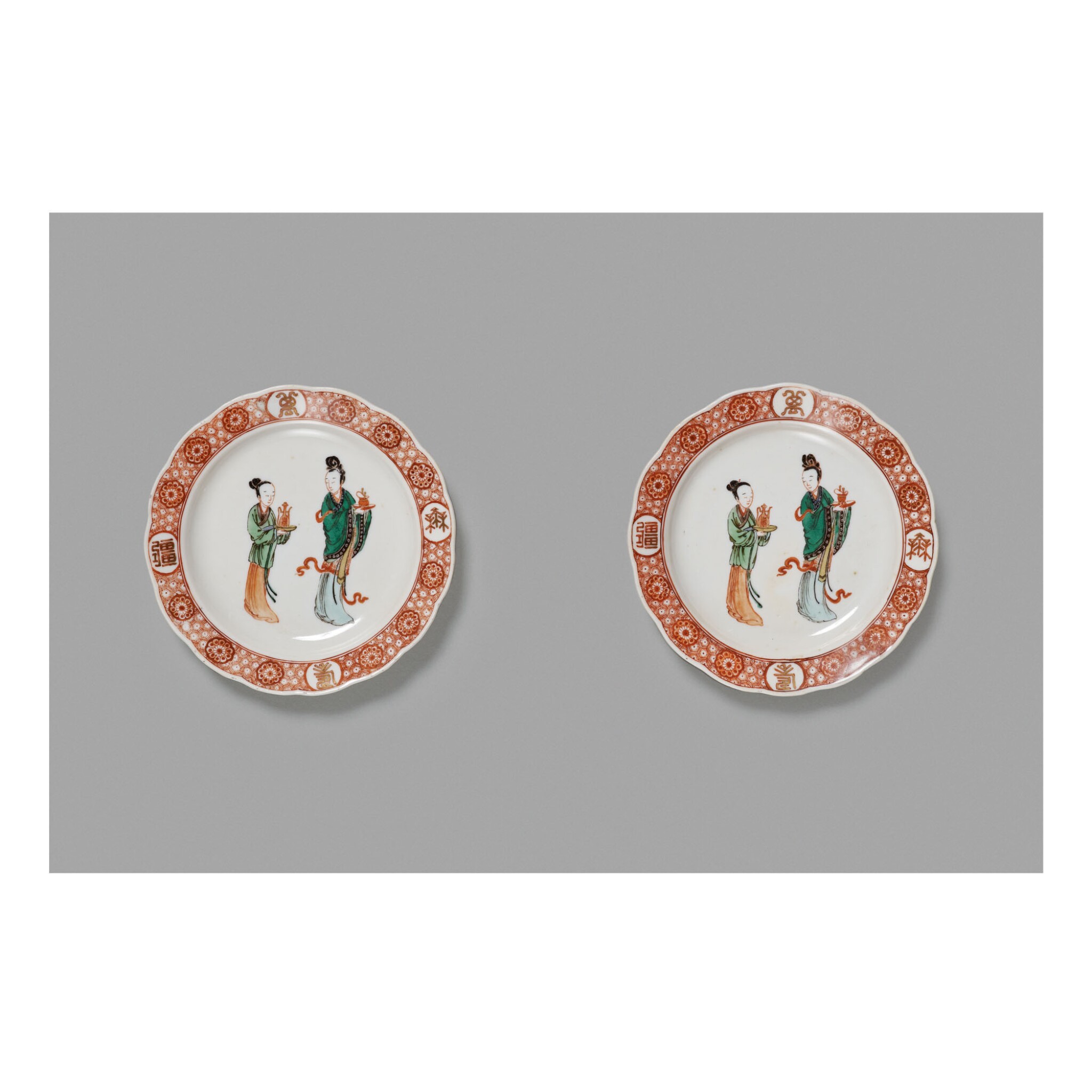 each thinly potted with shallow sides rising from a short foot ring to a scalloped rim, the center delicately painted with two elegantly attired female attendants, one carrying an archaistic jue on a tray, the other holding a ewer inscribed with a shou character, encircled by a border of iron-red diaper ground reserving florets and four medallions enclosing wan shou wu jian (limitless long life) in seal script, the base inscribed with a six-character mark in underglaze blue (2)

One dish with light rubbing to the iron-red approx. 0.5cm on the boarder next to the wan character, the foot ring with several areas of kiln grits and burst bubbles, otherwise in good condition.

The present pair represents a rare variation of a group of finely potted and painted ‘birthday’ dishes, featuring auspicious themes of longevity, made at the imperial kilns in Jingdezhen most likely to commemorate the Kangxi Emperor's sixtieth birthday in 1713. Among this superlative group of wares, dishes of similar diminutive size with foliate rims are exceptionally rare, with no other published examples known. Related dishes depicting pairs of beauties holding offerings, but of larger size and with straight rims, include one in the Cleveland Museum of Art, Cleveland, illustrated in The Severance and Greta Millikin Collection, Cleveland, 1990, pl. 70; and a second example, formerly in the Elphinstone Collection, now on loan from the Percival David Foundation of Chinese Art to the British Museum, London, included in the Illustrated Catalogue of Ch'ing Enamelled Wares, London, 1973, pl. 890; and a pair in the Museum für Ostasiatische Kunst, Cologne, published in Porzellanschätze der Kangxi-Zeit/ Porcelain Treasures of the Kangxi Period, Hetjens Deutsches Keramikmuseum, Dusseldorf, 2015, pls 7 and 8.

Compare also larger examples of this type with plain rims, one with a similar scene of attendants carrying a ewer and a jue, sold first at Christie's New York, 2nd December 1993, lot 293, and again in our Hong Kong rooms, 1st November 1994, lot 63; and another sold in these rooms, 15th September 1999, lot 87.