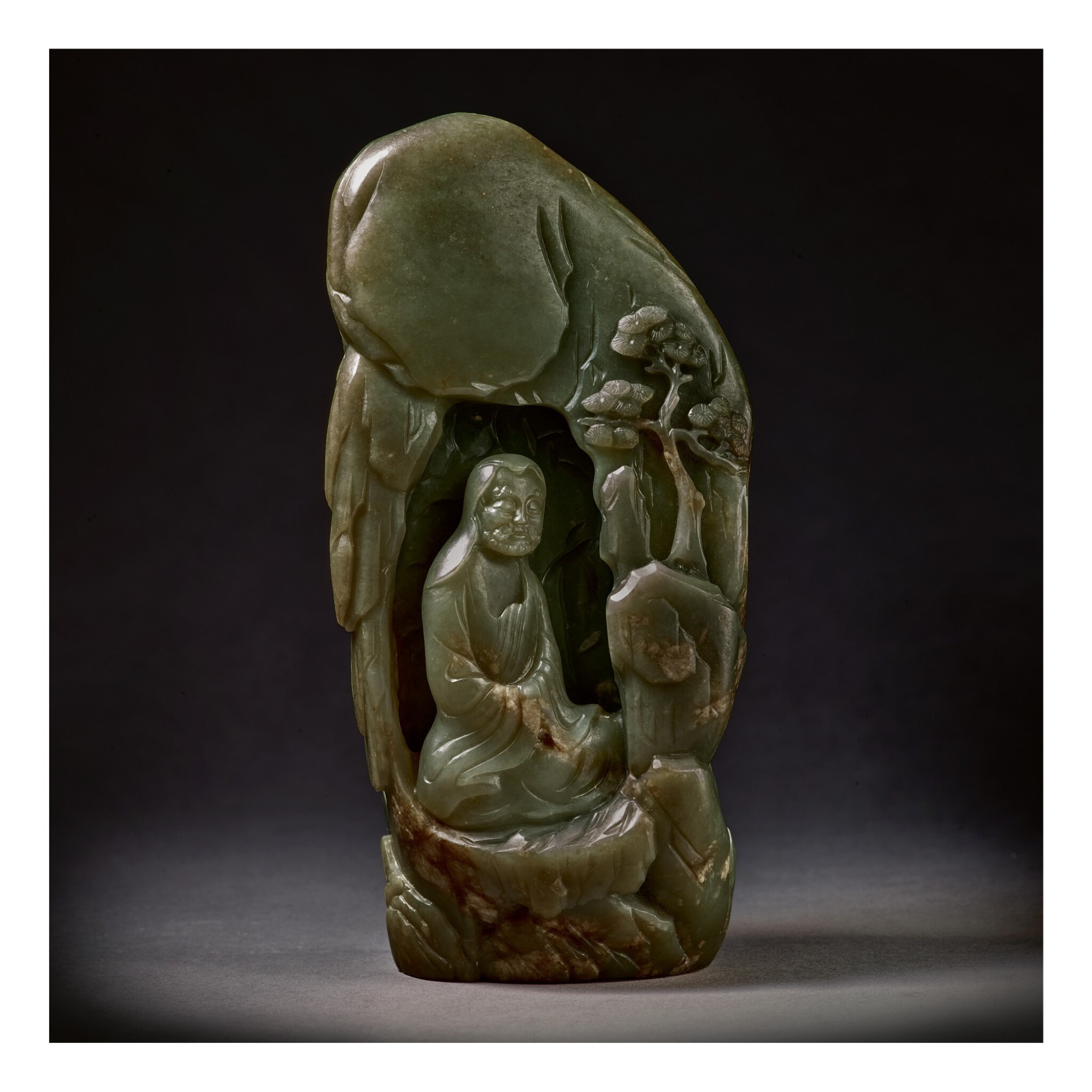 the large vertical stone carved in high relief as a mountainous retreat detailed with jagged rocks and a gnarled pine tree, with Bodhidharma seated cross-legged in a meditative posture in a grotto, cloaked in a loose robe concealing his hands, his face portrayed with down-cast eyes and curled beard and eyebrows, the reverse carved with a pine tree growing beside a waterfall running through the crevice of a rocky cliff, the stone an olive-green tone with some beige-brown inclusions

In overall good condition with minute nicks scattered around the edges and extremities. The stone with natural fissures and inclusions.

The present jade sculpture illustrates the legend of Bodhidharma, the 'First Patriarch' of Chan Buddhism in China. Bodhidharma, also known as Damo in Chinese, is largely credited with transmitting Mahayana Buddhism to China from its westerly neighbors. Accounts of his birthplace differ and include both Central and South Asian places as possibilities. According to the legend, Bodhidharma traveled to China to propagate the Buddha's teachings. One day he at arrived the Shaolin Temple, but he was denied entry. He then resided in a nearby cave, where he meditated in front of the cave wall for nine years, without eating or drinking. Upon the completion of the wall-gazing meditation, he was admitted into the Shaolin Temple.

Compare a related celadon jade boulder with a similarly depicted Bodhidharma gazing into a grotto wall in meditation, inscribed to the back with an imperial poem by the Qianlong Emperor, included in the National Palace Museum exhibition The Refined Taste of the Emperor: Special Exhibition of Archaic and Pictorial Jades of the Ch'ing Court, National Palace Museum, Taipei, 1997, cat. no. 39. The depiction of Buddhist monks in a mountain grotto is an extremely popular subject in Chinese art, and may have derived from a woodblock print of this theme in the eighteenth-century catalogue, Guyu tupu, attributed to the Southern Song period. A large number of such carvings were made during the Qianlong period; for example, see a white jade luohan boulder sold at Christie's London, 15th May 2018, lot 94.