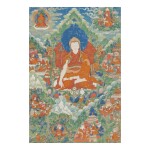 the lama seated in vajraparyankasana on a lotus petal throne with offerings in front consisting of a kundika, a patra with bilva fruit, a sieve and vase with flowers, wearing a red and gold dhonka embroidered with a phoenix and foliate motif and an elaborately decorated patchwork sanghati, the right hand of the lama extended in varada mudra, the left resting in his lap in samadhi mudra, wearing a yellow pandita hat, to the right of the figure sits a mendicant's staff or khakkhara surrounded by stacks of bounded sutras, to the left a large red and blue pitaka basket, all framed by an embellished throne back decorated with golden dragon finials holding flaming jewels, surrounded by scenes depicting the life of the lama, a devotional monk in the bottom right holding a Mt. Meru mandala offering, all set in a mountainous blue and green landscape rich with flowers and foliage

The present painting and the following thangka come from the Lamrim (Stages of the Path) Gelug Tradition Lineage set of paintings composed in the last half of the 18th century or the first half of the 19th century. Jeff Watt identifies sixteen paintings coming from the same set, of which the number of paintings in the entire set is still unknown. Two from this set are in the collection of the Rubin Museum of Art.

The central figure here is identified as Rendawa Zhonnu Lodro (1349-1412), the 74th of the Lamrin Lineage teachers. An adept teacher and practitioner, Rendawa traveled extensively in Ngari, Mangyul and Gungtang offering teachings. Through teaching, it is believed that he revived the tradition of the Madhyamaka in Tibet. For more information on his life and work, see The Treasury of Lives (https://treasuryoflives.org/).