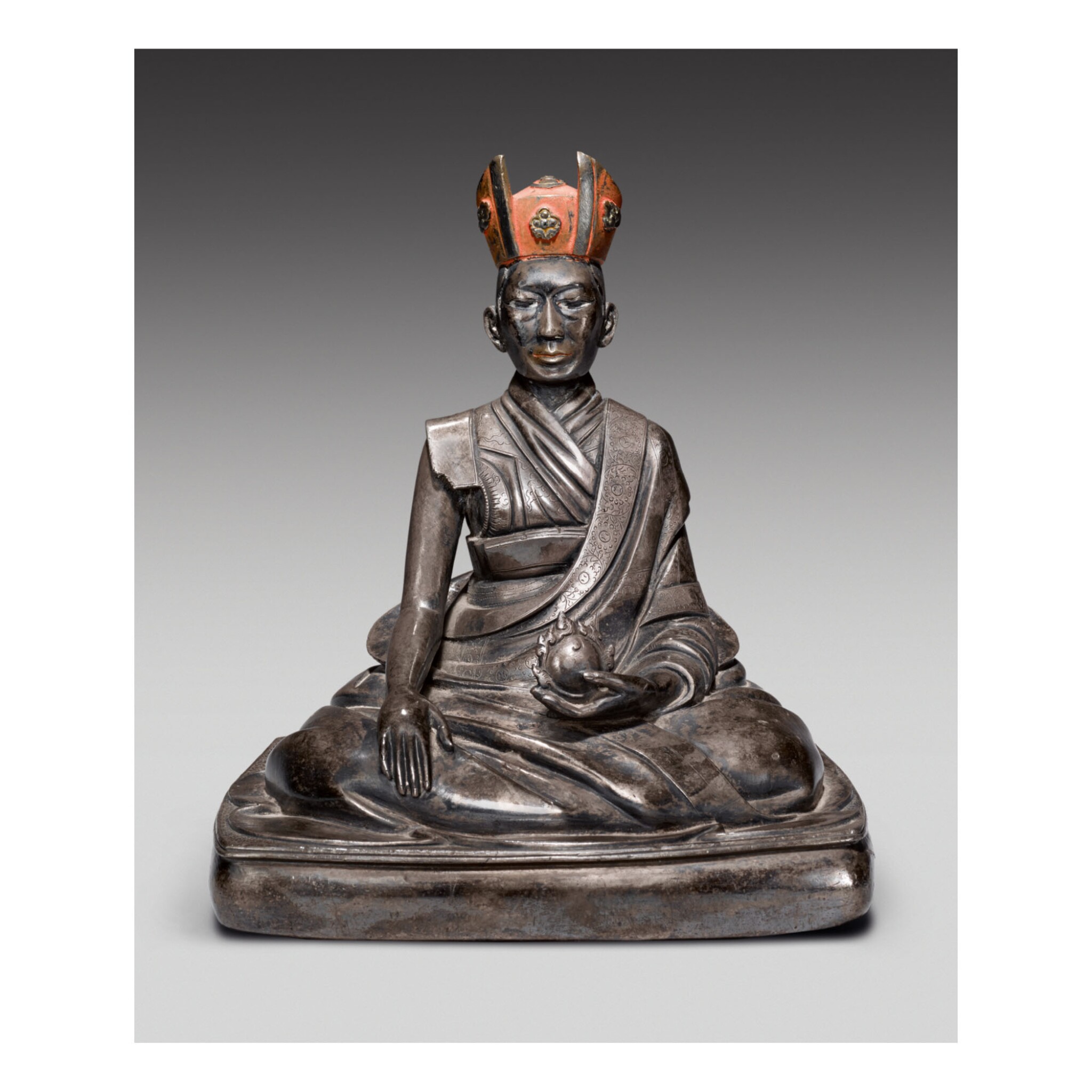 A SILVER FIGURE OF THE FIFTH SHARMAPA, KONCHOK YANGLAK

the lama seated in meditation posture on a cushion base, with the right hand resting on his knee and the left hand holding a flaming jewel, wearing robes of a monastic decorated with incised borders of clouds and foliate patterns, his eyes cast downward in meditative concentration, the red hat of the Shamar lineage crowning his head, showing the three-jeweled emblem illustrated on the front flanked by cloud patterns and topped with the crescent sun and moon pattern above

The inscription at the base of the sculpture identifies this figure as the Fifth Sharmapa, Konchok Yanglak: ‘Homage to the red hat holder Konchok Yanglak! Mangalam’ (ཞྭ་དམར་ཅོད་པན་འཛིན་པ་དཀོན་མཆོག་ཡན་ལག་ལ་ན་མོ་མངྒ་ལཾ།). The Fifth Sharmapa (1525 - 1583) was born in the Kongpo district and formally enthroned by the Eighth Karmapa, Mikyo Dorje (1507–1554) as the reincarnate of the red hat lineage. Having completed his studies by the age of twelve, "his fame for learning, discipline, and kindness soon spread widely." (D. P. Jackson, Patron and Painter: Situ Panchen and the Revival of the Encampment Style, p 90) It was the Fifth Sharmapa who later led the enthronement of the Ninth Karmapa, Wangchuk Dorje (1556-1603) and furthermore, served as his primary teacher.

In addition to his scholastic and spiritual accomplishments, the Fifth Sharmapa involved himself in building programs of temples and the commissioning of sacred art, supporting the artist Namkha Tashi, the founder of the Gardri painting school.

Konchok Yanglak's portrait is recognizable in paintings and sculpture alike from his slender physique, his elongated oval shaped face and enlarged ears. Here, cast in silver, a rare choice for Tibetan portraits, the Sharmapa is shown in meditation seated poised on a wide cushion with his left hand cradling a flaming jewel. In another example illustrated on Himalayan Art Resource, item no. 65561, the Fifth Sharmapa similarly holds a triratna in his left hand.

A 16th/17th Century portrait from the Nyingjei Lam Collection also portrays the Sharmapa in a silver cast. As noted by Weldon and Casey, the primary examples of silver cast portraits are of the Kagyu order, seeming to suggest their preference for this particular style of casting. (D. Weldon and J. C. Singer, The Sculptural Heritage of Tibet, pl. 49, p. 190). Another silver cast depicting the Ninth Karmapa, Wangchuk Dorje (1554-1603) (ibid., pl. 48) and showing similarity in style is dated by inscription to 1598.