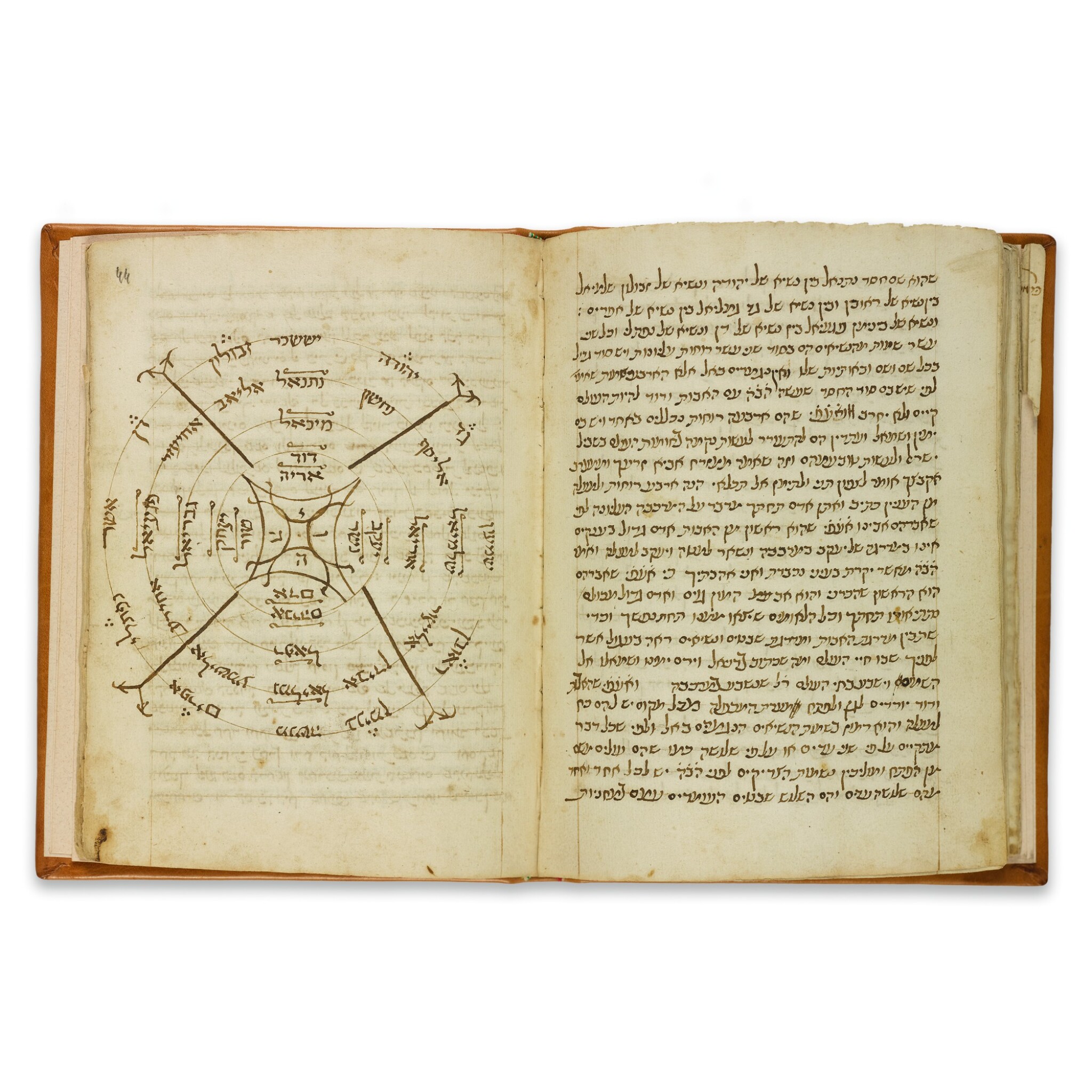 One of only two known autograph manuscripts by the famous messianic harbinger and martyr Rabbi Solomon Molkho.

The fifteenth century was a time of intense messianic excitement and speculation. Beginning already in its first third, news spread of the return of the Ten Lost Tribes, and toward its close a number of Jewish elites, particularly in Italy, undertook calculations of the end time. This eschatological effervescence came to a head when David Reuveni (ca. 1483-ca. 1538), an adventurer who (at times) claimed to be the son and brother of Jewish kings who ruled the tribes of Reuben, Gad, and half of Manasseh in the Arabian “Desert of Habor,” arrived in Italy in the autumn of 1523. Supported by some local Jews and by the great humanist Cardinal Egidio da Viterbo, Reuveni was eventually granted an audience with Pope Clement VII, who issued him a letter of recommendation that allowed him access to King John (João) III of Portugal in 1525. While the king was initially kindly disposed to Reuveni and treated him like an official ambassador, his attitude changed as he came to suspect that Reuveni was inciting crypto-Jews to revert to Judaism; he subsequently ordered him to leave the country.

One of those inspired by Reuveni to reclaim his Jewish heritage was Diogo Pires. Pires was born in Lisbon in 1501 to crypto-Jewish parents and, at the tender age of 21, was appointed a visiting judge to the Casa da Suplicação (Court of Appeals) of Portugal. After encountering Reuveni at the royal court, Pires circumcised himself in secret and adopted the Hebrew name Solomon Molkho (possibly actually pronounced “Malko” in reference to 2 Sam. 22:51). He then fled Portugal and eventually made his way to Salonika, where he joined the beit midrash of Rabbi Joseph Taitatsak (1465-1546), under whom he studied Kabbalah. A gifted rhetorician and charismatic leader, Molkho soon gathered a following of his own, and at his students’ urging he published a collection of messianic sermons in Salonika in 1529 (in later editions, the book came to be titled Sefer ha-mefo’ar). In the same year, he relocated to Ancona, where he continued preaching about the coming redemption, attracting large crowds of both Jews and Christians. He spent the following three years criss-crossing northern and central Italy, spreading his messianic messages wherever he went. In Venice, a Jewish doctor opposed to his agitations accused him of being a judaizing Christian, prompting an inquisitorial court in Rome to condemn him to be burned at the stake. It was only with the intervention of Clement VII himself that Molkho was saved and another martyred in his stead. In 1532, Molkho traveled to northern Italy, where he again met Reuveni, and the two of them resolved to visit the Holy Roman Emperor, Charles V, in Regensburg late that summer. While the exact purpose of their mission is unclear, it is known that Charles V ultimately had them both arrested, sending Reuveni to Spain in chains and transferring Molkho to Mantua, where he died a martyr’s death in November 1532.

Both in life and in death, Molkho was held in high regard within the Jewish world (including the likes of Rabbis Joseph Caro, Levi Isaac of Berdychiv, and Menachem Mendel Schneerson), and his influence on Jewish messianism in his own time and thereafter was substantial. However, very little of Molkho’s written oeuvre has survived. Aside from the aforementioned Sefer ha-mefo’ar, letters of his were included in Joseph ha-Kohen’s Sefer divrei ha-yamim (Sabbioneta, 1553) and subsequently incorporated into Abraham Rothenberg’s Hayyat kaneh (Amsterdam, 1660). Not until Israeli researcher Meir Benayahu published an autograph manuscript of Molkho’s in 1995 did the scholarly world become aware of additional homiletical material by him (also partially preserved in two others manuscripts: Vatican ebr. 428, no. 12 [ff. 137v-155r], and Benayahu O 167 [ff. 1r-18v]).

The present lot, about twice as long as the Benayahu autograph text, contains even more of Molkho’s previously unknown work. The manuscript may be divided into two parts (kunteresim, to use Molkho’s language). Folios 1-31 comprise a kabbalistic meditation on two stories of Rabbah bar Bar Hanah found in Bava batra 73a, an extended commentary on the book of Ruth, a dissertation on the eleven biblical verses that begin and end with the letter nun corresponding to the eleven psalms authored by Moses, and discussions of the secrets of the redemption and the arrival of the two messiahs: the messiah son of Joseph and the messiah son of David. Folios 33-60 present a series of interconnected sermons and messianic speculations based on comments in the Zohar, in which Molkho treats the topics of the ascent of the soul and eternal life, dates the final redemption to 1540, and predicts his own death by canon fire. This section features an unusual visual representation of the four earthly camps of the Israelites in the Wilderness corresponding to various elements of the celestial Chariot: each camp includes the names of three of the tribes and their princes, one angel (Michael, Gabriel, Raphael, Uriel), one forefather (David, Isaac, Abraham, Jacob), one of the four “animals” of the Chariot (lion, ox, man, eagle), and one of the letters of the Tetragrammaton (f. 44r). None of the other three aforementioned manuscripts preserves any part of this second kunteres.

Moreover, scholarly analysis has determined that nearly two-thirds of the second kunteres in the present lot are written in Molkho’s own hand! Until f. 42v, the hand is that of a professional Ashkenazic-Italian scribe who took care to copy the text clearly and elegantly, without extensive textual insertions or corrections, and maintained justified lefthand margins. From f. 43r onward, however, the writing is distinctly Sephardic semi-cursive, becoming more cursive beginning on f. 49r, and features numerous strikethroughs, edits, and marginalia. Comparison of this Sephardic hand, which has also corrected the Ashkenazic-Italian text at several points (see, e.g., ff. 9r, 10r, 13r-v, 38r, 40r, 42r), with that of the Benayahu autograph manuscript and with that which corrected a privately-owned copy of the first edition of Sefer ha-mefo’ar (a microfilm of which is held by the National Library of Israel) reveals them to be identical. All of these factors have convinced Yosef Avivi, Moti Benmelech, and Shlomo Zucker that folios 43-60 were written by Molkho himself and that the rest of the manuscript was edited by him!

Benmelech has argued that Molkho hired the professional scribe to copy over the text of this tract afresh in preparation for publication. We know, in fact, that Molkho attempted in October 1530 to print the first kunteres of this manuscript in Venice but was prevented from doing so by local opposition. This explains why several instances of the word roma (Rome=Christendom) in the professional hand have been crossed out by the Sephardic hand and replaced with botsrah (Basra; see, e.g., ff. 20v-21v, 39r)—a not-uncommon form of self-censorship applied prior to publication in Christian lands—whereas occurrences of roma in the autograph section remain untouched. Benmelech believes that Molkho was in the midst of correcting the entire treatise when he left for Regensburg in August 1532, a journey that would prove to be his last as a free man. After his execution, a follower must have combined the autograph portion of the work with that copied by the professional scribe, producing the book before us.

The historic significance of this lot cannot easily be overstated. Not only does it preserve autograph material of Molkho’s found nowhere else—constituting perhaps his last written testament prior to his martyrdom—it also opens new vistas for the exploration of his biography, kabbalistic theology, messianic teachings, and eschatological program. In the words of Avivi, this is “a manuscript unlike any I have seen among the thousands that have crossed my desk. […] There are no words to describe the importance of this manuscript.”

Sotheby’s is grateful to Yosef Avivi, Moti Benmelech, and Shlomo Zucker for providing information that aided in the cataloging of this manuscript. Their complete reports are available upon request.