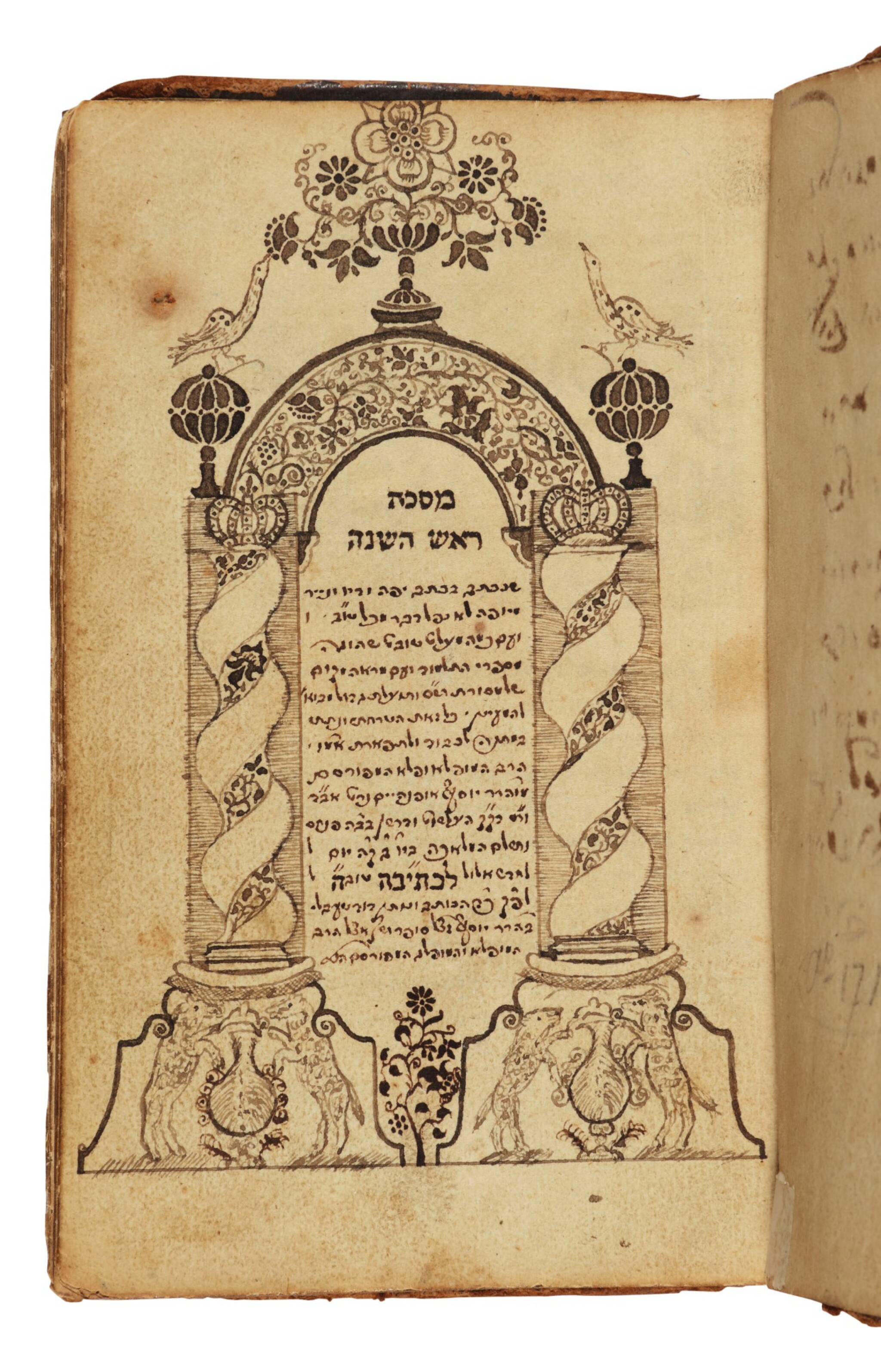 A charmingly decorated miniature manuscript of the Talmudic text, with distinguished rabbinic provenance.

David Oppenheim (1664-1736), who served as Chief Rabbi first of Moravia and then of Prague and Bohemia, was a learned halakhist, gifted yeshiva dean, and munificent philanthropist. He was also one of the first great private Jewish collectors of antique Hebrew books and, as a supporter of Jewish scholarship, made his enormous library in Hannover available to fellow rabbis and researchers. Following his passing, his collection was put up for sale and was eventually purchased by the Bodleian Library in Oxford, where it constitutes the bulk of that institution’s rare Hebraica and Judaica holdings.

Oppenheim’s only son, Joseph (ca. 1690-1739), shared his father’s passion for Jewish scholarship and book collecting and indeed served as one of the library’s caretakers following his father’s death. In 1710 or 1712, after his Elul [5]467 (1707) marriage to Tolze, daughter of the wealthy Viennese court Jew Rabbi Samson Wertheimer, he became head of the rabbinic court and yeshiva dean in Holešov (Holleschau), an important Jewish community in Moravia, where he developed a reputation as a great Talmudist, preacher, and supporter of charitable causes. He served in these capacities until 1714, and by August 1719 (and possibly as early as 1714) he had relocated to Hannover, where he worked as an imperial court factor, financier, and banker until his premature passing twenty years later.

The present lot, a miniature handwritten copy of Tractate Rosh ha-Shanah featuring an elegantly ornamented title page and so-called inhabited initials making up the initial word panel, was created as a gift for R. Joseph Oppenheim by his scribe and cantor, David Tevele ben Joseph. Appropriately, the work is dated Monday, 25 Elul [5]472 (September 26, 1712)—just five days before Rosh Hashanah—using the chronogram li-ketivah tovah (for a good inscription [in the Book of Life]). The volume, which eventually passed to a presumptive relative (through marriage) of Glikl of Hameln, should be seen as part of the revival of luxury Hebrew manuscript production that took place in the eighteenth century, primarily in German lands and on behalf of affluent court Jews and their families (on which phenomenon, see also next lot).

“This Talmud was given to me thoroughly as a gift by my ancestor, the grandfather of my mother my teacher, the famous, noble officer and scholar […] Sussman Gans, may his Rock and Redeemer keep him, and may God lengthen his days and years in goodness and pleasantness. // This Talmud belongs to the lad Yitshak Itsik, son of my master my father, the wondrous, exceptional, noble head and officer […] Rabbi Juspa Katz, may his Rock and Redeemer keep him, of Hamburg.” (flyleaf of upper board)