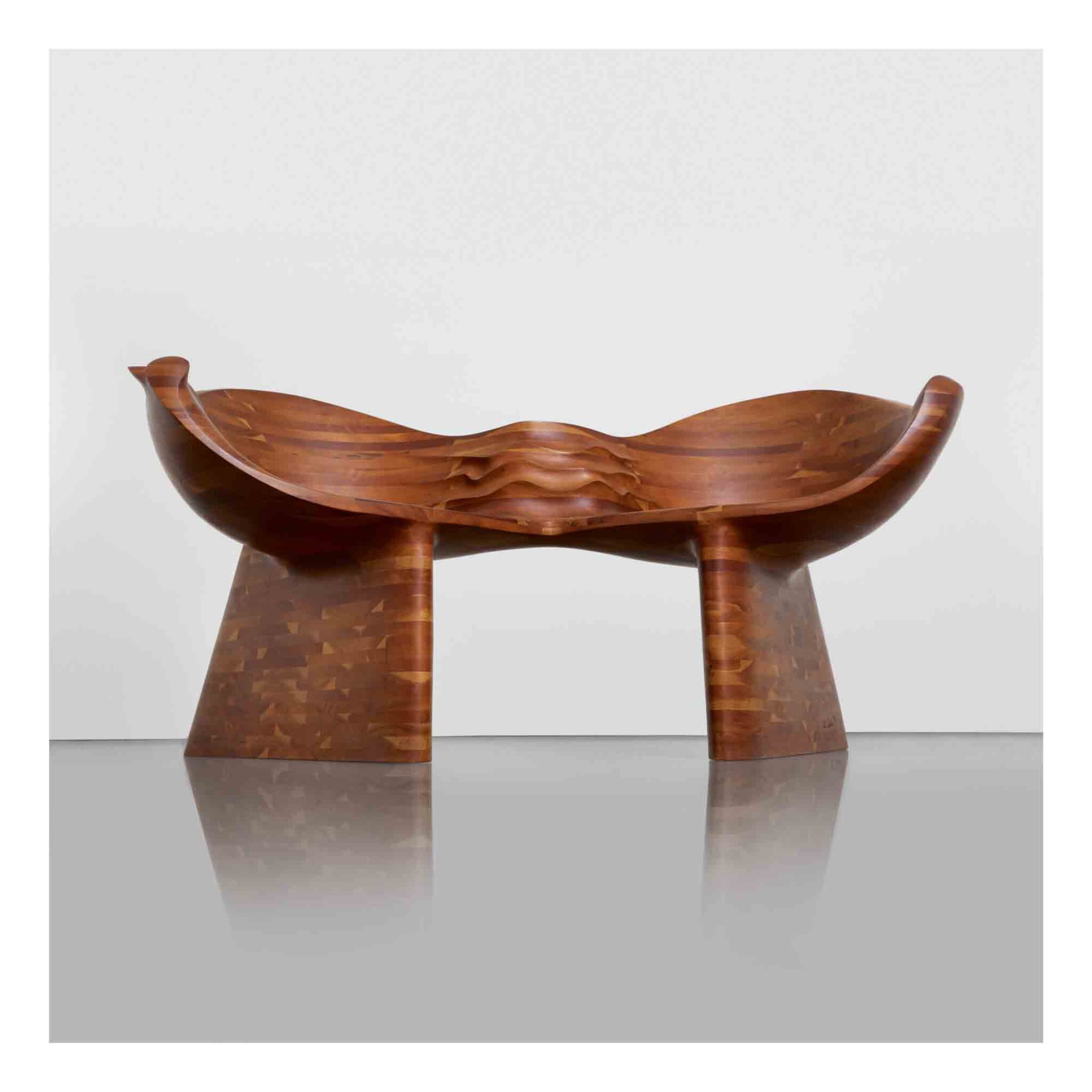 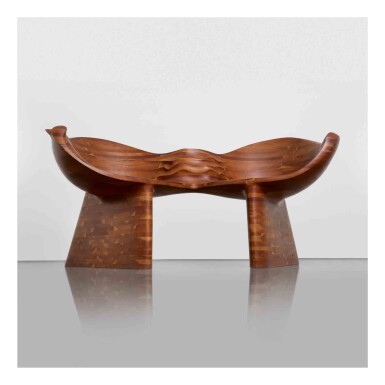 Overall in excellent condition. An extremely rare form with only two known variations in museum collections, the present lot has remained under the same ownership since the year it was made and presents in very well-preserved condition overall. The cherry stack laminate surfaces present with exceptionally rich coloration and highly organic sculptural contouring. The wooden surfaces with very faint surface scratches and some occasional scattered shallow abrasions to the wood consistent with gentle use. The stack laminate presents with minute and a very few isolated instances of inpainting concentrated to the legs and the two seats; very minimal and not visible unless inspected under blacklight. The proper right seat presents with a very small tear to the wood measuring approximately 3/4 inch long. The wood presents with scattered and very minimal black house paint marks throughout, most visible on one side of the proper right leg and proper right backrest, not visually distracting. When viewed in the round, the settee displays dynamic presence and exceptional sculptural quality that makes it a masterpiece in Wendell Castle’s oeuvre.

Mammoth Hot Springs, in Yellowstone Park, is one of the more staggering sights in the North American landscape. Tiers of travertine rise in terraces, the result of thermal activity far below. Superheated water cascades down the formation, carrying with it dissolved limestone, which is slowly added to the mineral deposit. It is a magical sight, which bears witness to awesome forces constantly in action.

Not a bad analogy, then, for the work of Wendell Castle. When this quietly assured man departed the earth in January 2018, he left behind one of the great creative stratigraphies of the modern era. Unstoppable in his work ethic, irrepressible in his nature, he generated astonishing forms with equally astonishing reliability.

The settee offered here is among his most impressive works. It too seems to cascade from some unseen and potent source, its stepped construction (the famed stack-lamination technique) arranged into a gentle downward flow. Particularly eloquent is the passage of sinuous, rippling carving in the center, the site at which the curvaceous lines of the overall form convene. Occasional contrast between darker heartwood and lighter sapwood adds a lively visual interest to the composition, emphasizing the grid of blocks from which the object was heroically won. This effect is particularly striking in the angled, roughly trapezoidal legs, relieving their massiveness and lending them graphic energy.

The bucket-shaped seats, shapes that Castle had employed since the 1960s, indicate his indebtedness to midcentury design. Though obviously very different in material and thickness, they are similar in overall contour to the fiberglass shell chairs of Charles and Ray Eames, introduced in 1948, and George Nelson’s Swag Leg chair of a decade later. While alluding unmistakably to these precedents, Castle also departs from them in a manner true to his sculptural method, joining the seats together into a single double-humped profile – like the world’s most elegant camel – and also teasing the ridge lines out into a pleasingly dimensioned flat support for the arm, as only a hand carver would (or indeed, could) do.

The settee is profitably viewed from behind, with an unexpected promontory jutting out from the middle, making a point of arrival for all the moving lines of the composition. From above, this ledge is a generous oval; from the rear it suggests a bird’s head, nestled between the out-swept wings of the back. In another gorgeous piece of integration, the twin ribs of the legs spread themselves effortlessly into the convex exterior of the seats. Here is a reminder of Castle’s origins as a sculptor. Even when working in this most frontal of all furniture typologies – even the grandest settees are usually fated to be shoved up against a wall – he conceived the object fully in the round.

Despite the apparent challenges of the format, Castle made quite a few settees in the 1960s and 1970s, sometimes with two seats, sometimes three, and in various materials, including the molded fiberglass of his pioneering Molar series. A notable precursor to the present example is the justly famous three-seater bench at the Minneapolis Institute of Art (accession no. 93.9), whose undercarriage is like a tendrilled root system.

The present example is one of three works that Castle made to a similar design. The first, dating to 1973 and executed in cherry wood, was commissioned for the Gannett Company, a longstanding news publisher in upstate New York, headquartered in Castle’s own town of Rochester. This original version was donated to the Metropolitan Museum of Art – purportedly because a secretary at Gannett was tired of continually colliding with the outward-flaring arms (such are the hazards of avant garde furniture).

Castle went on to make two other settees, nearly identical but notably more restrained at the corners. One, also in cherry, was commissioned by Jonathan Fairbanks, the artist’s unswerving curatorial champion at the Museum of Fine Arts, Boston. The present example was made concurrently but is in walnut, another favored timber for Castle, with deep roots in the American woodworking tradition. Even as he vaulted forward in his conception of what the discipline of furniture could be, he never lost sight of where it had been.

Equally, we can look forward from this object to Castle’s future work. Settees with either two or three seats made frequent appearance in his late career, when he consciously determined to return to his early stack-laminated abstract designs, and reinterpret them with new aesthetic emphases (and eventually, new digital tooling). A notable example, sold in these rooms in 2019, is Arcadia, which has three seats punctuated by cut-outs; it is held up by two tilting pillars whose geometry distantly recalls the slant slab legs of the present example.

You get the point: when Castle had an idea, he did not easily let it go. For all of his restless energies, his desire to get on to the next chapter in his own work, he also constantly iterated and refined, circling back to particular maneuvers and forms to see what else could be made of them. The fact that he made three versions of this ambitious design (no light undertaking, even for him) is noteworthy. It suggests not only that he considered it a success, but felt that he could keep learning from it.

Now, thirty years on, the object invites us to do the same. It is a work of contrasts: built plank by plank, yet flowing freely; possessed of considerable monumentality, yet light on its feet; at once abstract and organic, obdurate and transcendent. It is a work firmly grounded in its moment that also looks forward and back, not just in Castle’s own career, but the wider, interwoven histories of American furniture and sculpture. I began this essay by comparing it to a naturally-occurring marvel, accumulated over millennia. Yet it was made by the hands of just one man, in the year 1979. All the more reason to recognize it for what it is: a wonder of the world.