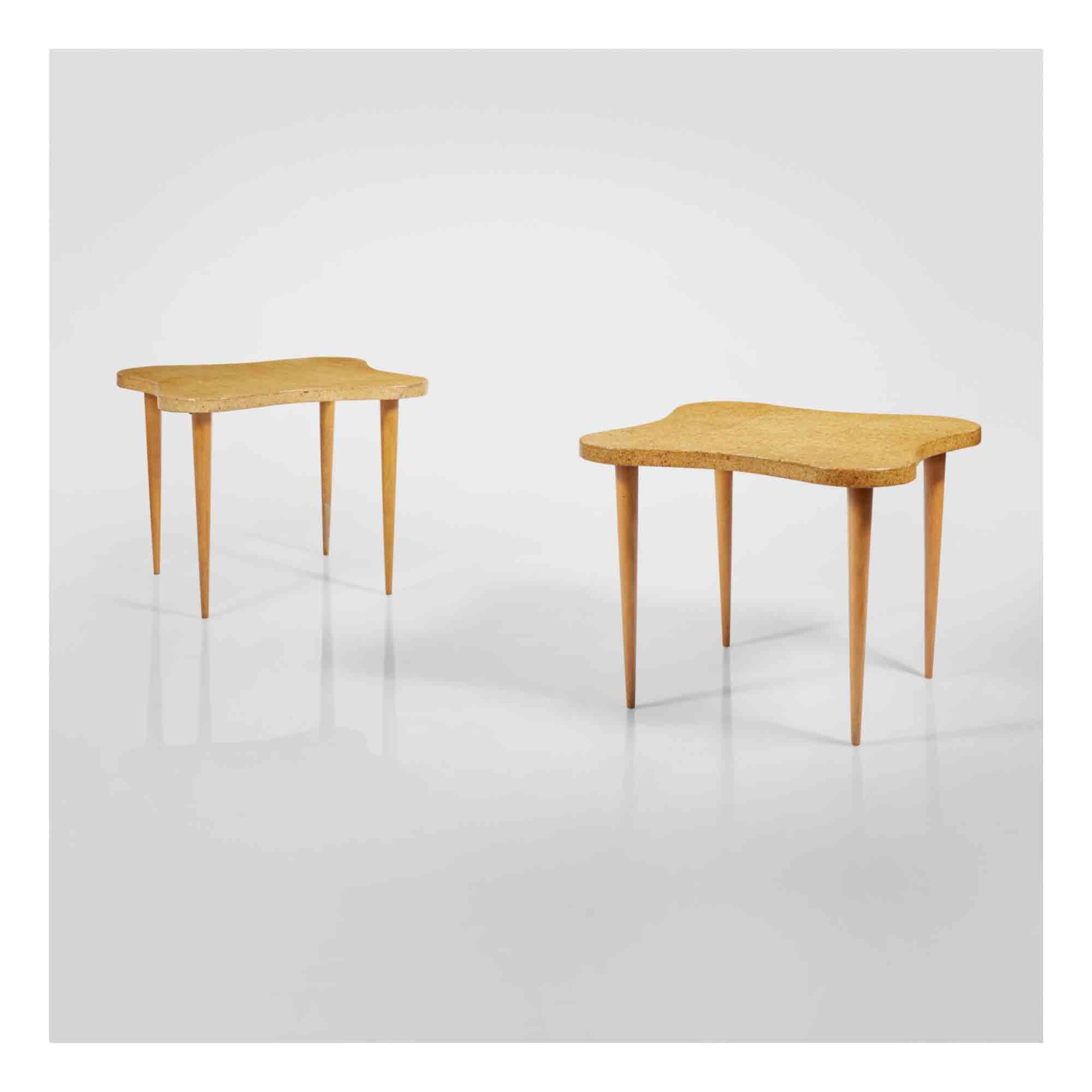 Overall in very good condition. A superb example of Paul Frankl’s early use of cork in squares laid over a plywood base. The cork presents with surface irregularities inherent to the material as well as scattered minute abrasions to the surface consistent with gentle use. One tabletop with an area of fine, red paint marks to one side measuring approximately 1 inch wide and not visually distracting. The seams separating the cork squares with some very minimal edge wear and light soiling consistent with age. The tables appear to have been sensitively refinished at some point in their history. For one table, the legs are affixed with wing nuts, further evidence of the provisional nature of the design. The legs with light scratches and scuffing throughout consistent with gentle use. The feet retain their likely original metallic protective pads which are stable. Two matching tables with rich history and outstanding provenance.

Edgar and Liliane Kaufmann, Pittsburgh
Jerome Apt and Joan Frank, Pittsburgh
Acquired from the estate of Joan Frank Apt by the present owner

Paul T. Frankl designed these two tables around 1945. They are custom works, made exclusively for Edgar Kaufmann, the Pittsburgh department store magnate, and his wife Liliane, who had commissioned and built Frank Lloyd Wright’s Fallingwater in the early 1930s. Frankl had first met the Kaufmann couple in the 1920s, and he sometimes advised Edgar on the latest design trends.

At the time he produced these tables, Frankl was living and working in Los Angeles. He operated a gallery on Rodeo Drive in Beverly Hills, but after 1942 he had been forced because of wartime material shortages to rely on the sale of potted plants and cut flowers, as well as some decorative articles, to turn a profit. He continued to design furniture pieces during the war years, anticipating a surge in demand after the end of the conflict. These tables represent a new direction for Frankl: for the first time they display his interest in pure biomorphism, an idea he may have taken from some of the Scandinavian designers who exhibited at the 1939 New York World’s Fair, among them Alvar Aalto and Josef Frank. The Johnson Furniture Company, in Grand Rapids, Michigan, later mass-manufactured a slightly variant version of Frankl’s table design. For these early examples, he employed cork in squares (laid over a plywood base), rather than full sheets of cork, as he later would for the Johnson pieces. He did so likely because he was unable to find continuous sheets during the war years. The legs are affixed with wing nuts, further evidence of the provisional nature of the design.

The Kaufmanns may have purchased the tables for Fallingwater or for their Pittsburgh home. By the 1950s, they were in the collection of Joan Frank Apt, who installed them in her James Speyer-designed house in Pittsburgh. These two tables are early and important examples of mid-century American modernist design.

University of Texas at Austin