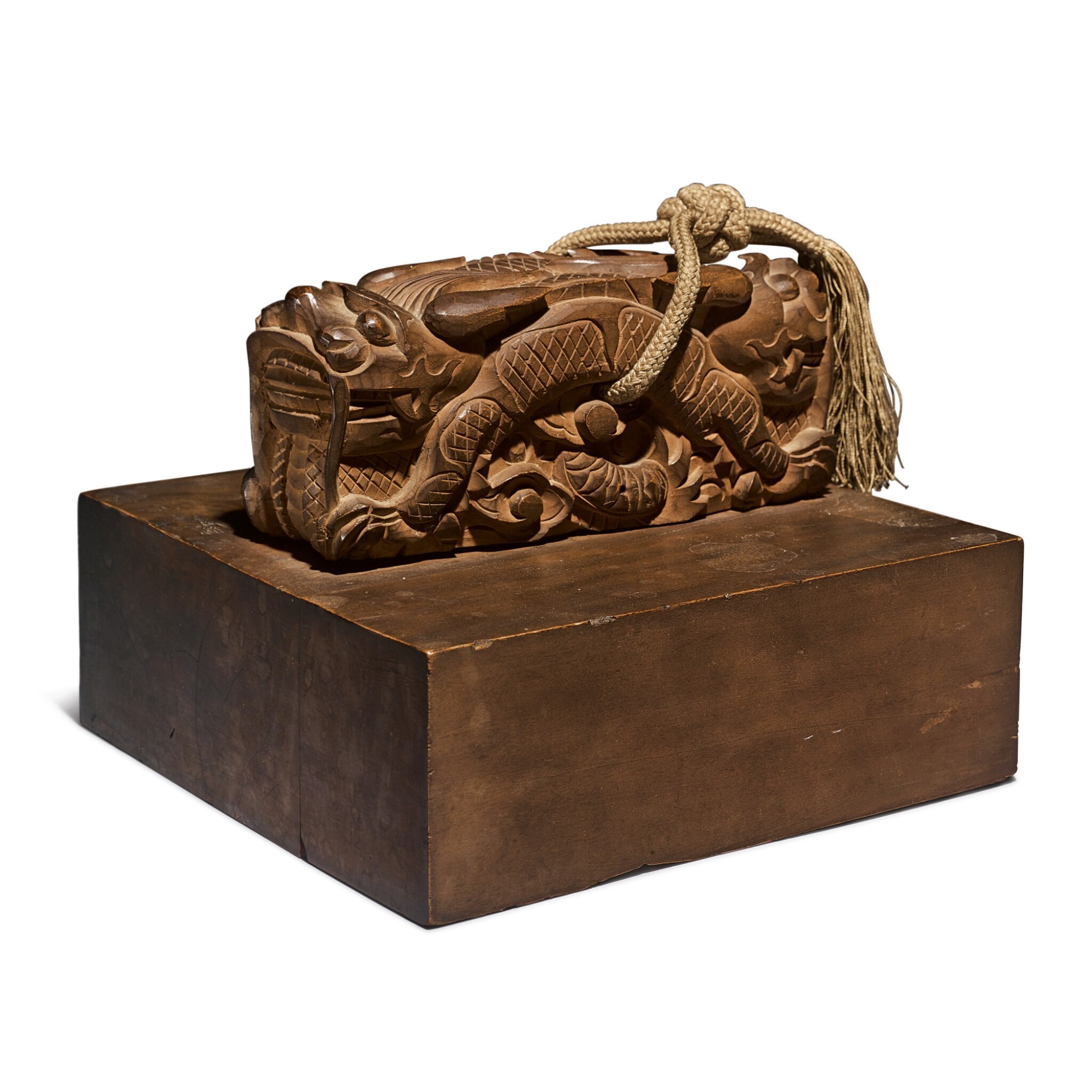 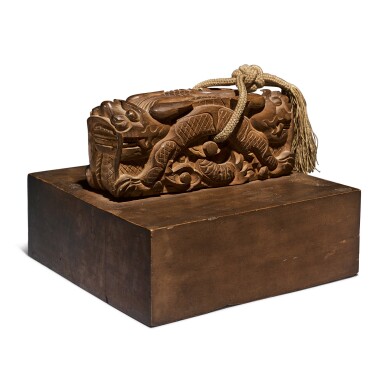 of square section, surmounted by a pair of addorsed dragons among clouds, each powerful creature boldly carved with bulging eyes and flaring nostrils above long whiskers, the mouth open to reveal sharp fangs, two horns extending back over its head along a combed mane with incised details, the two scaly bodies tightly intertwined and crouching, pierced through the center with an aperture threaded with a yellow silk cord terminating in knotted tassels, the seal face deeply carved in baiwen style with four characters reading xieci yuanchun (in celebration of the New Year)

There are some age-related chips to the edges of the seal face, and a few age cracks to the wood, including one running vertically through the yuan and chun characters. Overall the seal is in good condition with expected wear and minute nicks to the extremities. The detachable finial is affixed to the seal.

Collection of Max Meincke, acquired in Beijing circa 1900, and thence by descent.

The seal face is inscribed with a four-character inscription Xieci yuanchun, which is a verse from a poem recorded in the Chinese classic Yuefu shiji [Collection of Yuefu poetry] as being recited on a New Year banquet during the Sui dynasty. This four-character verse, which can be interpreted as 'in celebration of the New Year', indicates the present seal was likely created for the occasion of a New Year festival.

Although the present seal does not appear to be documented in Qing imperial records, it may have belonged to Empress Dowager Cixi. As noted by Guo Fuxiang, Empress Dowager Cixi owned a large number of seals. Only a small group has been included in the Cixi Baosou, and among all the seals of Cixi, a larger number of seals were made from either tanxiangmu or celadon jade from Xiuyan, Liaoning province (see Guo Fuxiang, Gugong bowuyuan cang qingdai dihou xiyin pu Cixi juan [Catalogue of imperial seals of the Qing dynasty. Cixi section], vol. 1, Beijing, 2005, p. 22). Compare a closely related tanxiangmu seal of a similar size that belonged to Cixi, also with a separately carved double-dragon finial, inscribed to the seal face with a seven-character verse from a poem by the Yuan dynasty scholar Weng Sen, in the Palace Museum, Beijing, published in Gugong jingdian. Ming Qing dihou baoxi [Classics of the Forbidden City. Imperial Seals of the Ming and Qing Dynasties], Beijing, 2008, pl. 280 (fig. 1), together with a larger example, the 'Cixi taihou yulan zhibao' (seal for the appreciation of the Empress Dowager Cixi) seal, pl. 269.