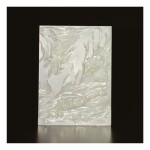 the translucent white stone of rectangular form, skillfully carved with several layers of relief on one side depicting Su Dongpo, Huang Tingjian and the monk Foyin accompanied by a boatman seated in a covered raft in a river estuary facing a large overhanging cliff face with pine and wutong growing from the crags, the reverse carved with a scholar and an attendant admiring a crane in flight amid clouds before a pavilion sheltered amongst a bamboo grove and a pine tree, the lower level depicting a waterfall in a rocky landscape next to a prunus tree, the even white stone with a very pale celadon tinge, two wood stands (3)

One lower corner has been slightly polished, with a small associated chip. One of the bamboo leaves on the reverse has a small chip. One upper corner has a minor fissure. Otherwise, the table screen is in overall good condition with some expected minute nicks and tiny bruises to the edges and extremities.

Expertly carved from a luminous white stone, the present table screen is an outstanding example of the height of carving in the Qianlong period. The carver has successfully created a sense of depth and three-dimensionality on a flat surface by fashioning the stone to varying levels of relief and utilizing the way the light refracts through and reflects on the surface. Such screens were fashioned from carefully chosen, highly translucent stones, which enhanced the differing depths of the carved pictorial scene and were seldom created before the Qianlong period due to the inaccessibility of large flawless pieces of jade. The particular challenge presented to the carvers of jade table screens was to compose two different designs on each side that would not interfere with but rather enhance the other when light shone through.

One side of this screen illustrates a scene from the famous rhapsody Hou Chibifu/Latter Ode to the Red Cliff, composed by the celebrated Northern Song poet, Su Shi (1037-1096), commemorating his trips to the historical battlefield of Red Nose Cliffs during his political exile. The other side depicts two figures, possibly Shoulao and an attendant, in a mountainous landscape where a crane flies above the Three Friends of Winter, namely a pine tree, prunus tree and small bamboo grove. The rugged mountains give a sense of harmony and continuity between the scenes while providing an attractive contrast between the finely detailed soft features of the figures and various textures of the trees.

A table screen depicting identical scenes, but of slightly larger size and more carved details, from the collections of Sir Bernard Erkstein and Lady Lenanton was sold twice in our London rooms, 9th December 1948, lot 90, and 29th June 1976, lot 137. See also a spinach-green jade screen depicting a related scene of figures in a small boat, from the P. Ayers and P.D. Krolik collections, sold twice in our London rooms, 31st January 1961, lot 175, and 24th February 1970, lot 140.

In its style and technique, this screen exemplifies the imperial style of the 18th century, whereby the Qianlong Emperor advocated that jade mountains and carved panels should carry the spirit of paintings by famous past masters. It is recorded that a number of classical paintings from the Emperor’s own collection were ordered to be reproduced in jade, such as the celebrated painting Travellers in the Mountains, by the eminent Five Dynasties painter Guan Tong (907-960). Compare jade table screens similarly inspired by paintings and carved with figural mountain scenes, such as a white jade example, in the De An Tang Collection, included in the exhibition Romance with Jade, Palace Museum, Beijing, 2004, cat. no. 67; three screens, also with inscribed imperial poems, in the National Palace Museum, Taipei, included in the Museum’s exhibition, The Refined Taste of the Emperor. Special Exhibition of Archaic and Pictorial Jades of the Ch’ing Court, Taipei, 1997, cat. nos 62, 65 and 67; and a pale celadon example sold in our London rooms, 12th March 1982, lot 29, and again in our Hong Kong rooms, 5th October 2016, lot 62, from the collection of Roger Keverne. A slightly larger spinach-green jade screen, carved with Laozi and Yin Xi, from the collections of Robert C. Bruce, Mrs Ian Beattie and Mr and Mrs Djahanguir Riahi, was sold in our London rooms, 21st November 1961, lot 163, at Christie’s London, 3rd November 1969, lot 157, and most recently in our Paris rooms, 22nd June 2017, lot 6.