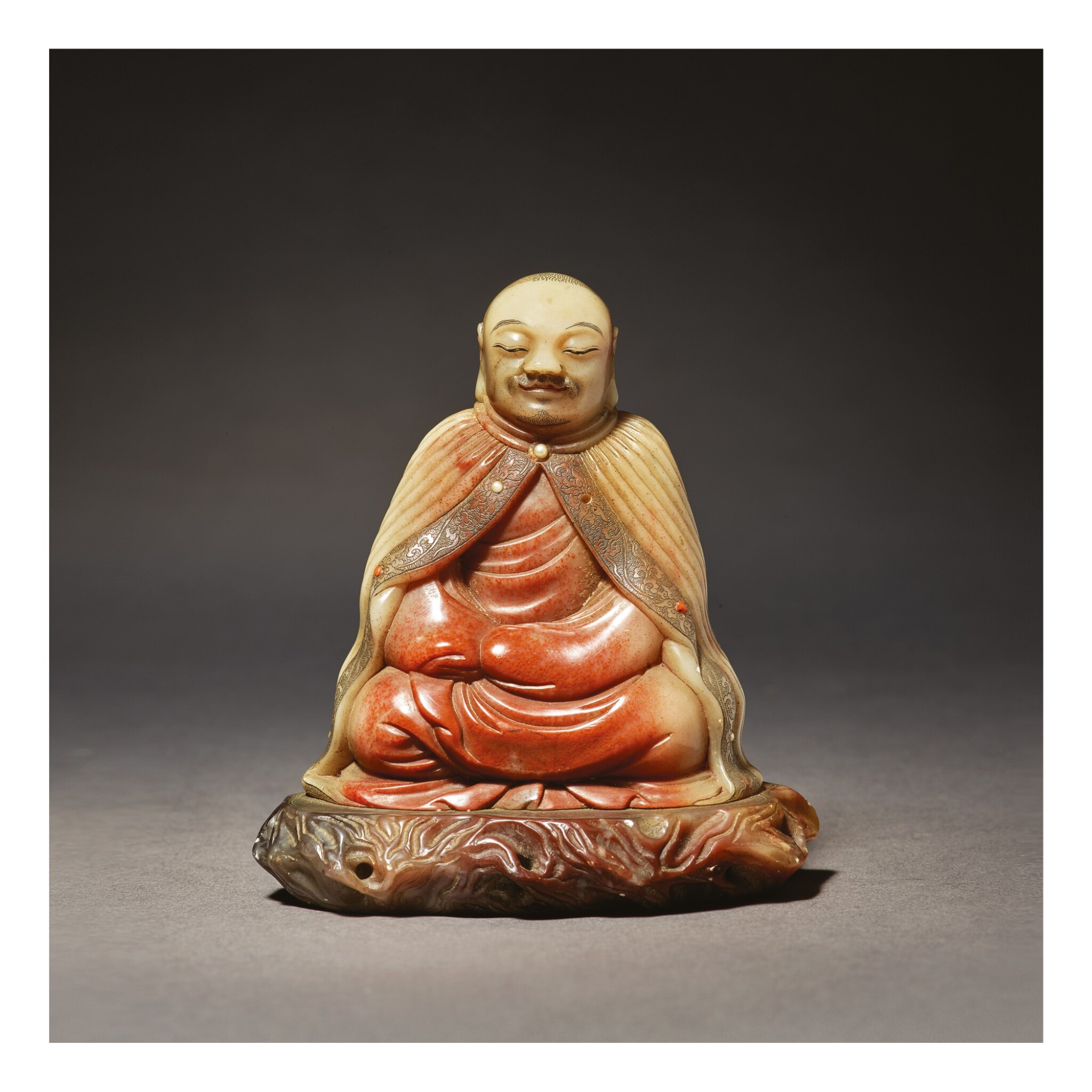 A SUPERB SOAPSTONE FIGURE OF A LUOHAN, ATTRIBUTED TO ZHOU BIN

masterfully carved, the deity seated with legs crossed, the hands resting in the lap, the face with a serene expression detailed with downcast eyes above a broad nose and a slightly upturned mouth, the hair, beard, and eyebrows finely incised and painted in black pigment, dressed in a loose robe draped in naturalistic folds over the arms and legs, cloaked in a long striped cape finely incised along the hem with meandering lotus scrolls and inset with mother-of-pearl and coral, all above a rockwork base meticulously incised on the top with a brocade pattern, the underside with a two-column inscription reading dishiqizunzhe ruding Shangjun (The seventeenth Luohan in meditation, Shangjun), the stone a milky white color with blushes of red

The figure is in overall good condition, expect for one inlay missing. There are some minute nicks and tiny bruises to the extremities and some shallow scratches to the base, as can be expected. The stone with a few minor natural veining, including a very faint one to the nose bridge.

Private collection, acquired prior to 1993, and thence by descent.

Finely fashioned with highly individualized facial features, this luohan belongs to a set created by one of the great carvers of the 17th century, Zhou Bin, zi, Shangjun. As one of the best known and talented soapstone carvers, Zhou was a native of Zhangzhou in Fujian province, where large soapstone quarries are located. Although textual information about him is scarce, and his exact dates are not known, he is believed to have been active in the Kangxi period and to have been trained by Yang Yuxuan, another well-known soapstone carver. Fang Zonggui in Shoushanshi zhi [Records of Shoushan Stone], Fuzhou, 1982, pp 77-8, notes that Zhou’s works were always prized in artistic circles.

Three luohan belonging to the same set as the present figure have been previously auctioned, all of which came from the same collection. One depicted holding a lingzhi, similarly incised to the underside with dishiliuzunzhe zhilingzhi Shangjun (The sixteenth luohan holding a lingzhi, Shangjun), was sold in these rooms, 22nd September 2005, lot 60, and again in our Hong Kong rooms, 2nd June 2016, lot 73, from the Water, Pine and Stone Retreat Collection; the second holding a ruyi scepter, inscribed with diqizunzhe zhiyuruyi Shangjun (The seventh luohan holding a jade ruyi, Shangjun), was sold in these rooms, 31st March-1st April 2005, lot 202; and the third identified as the tenth luohan, was sold in the same rooms, 22nd September 2004, lot 50.