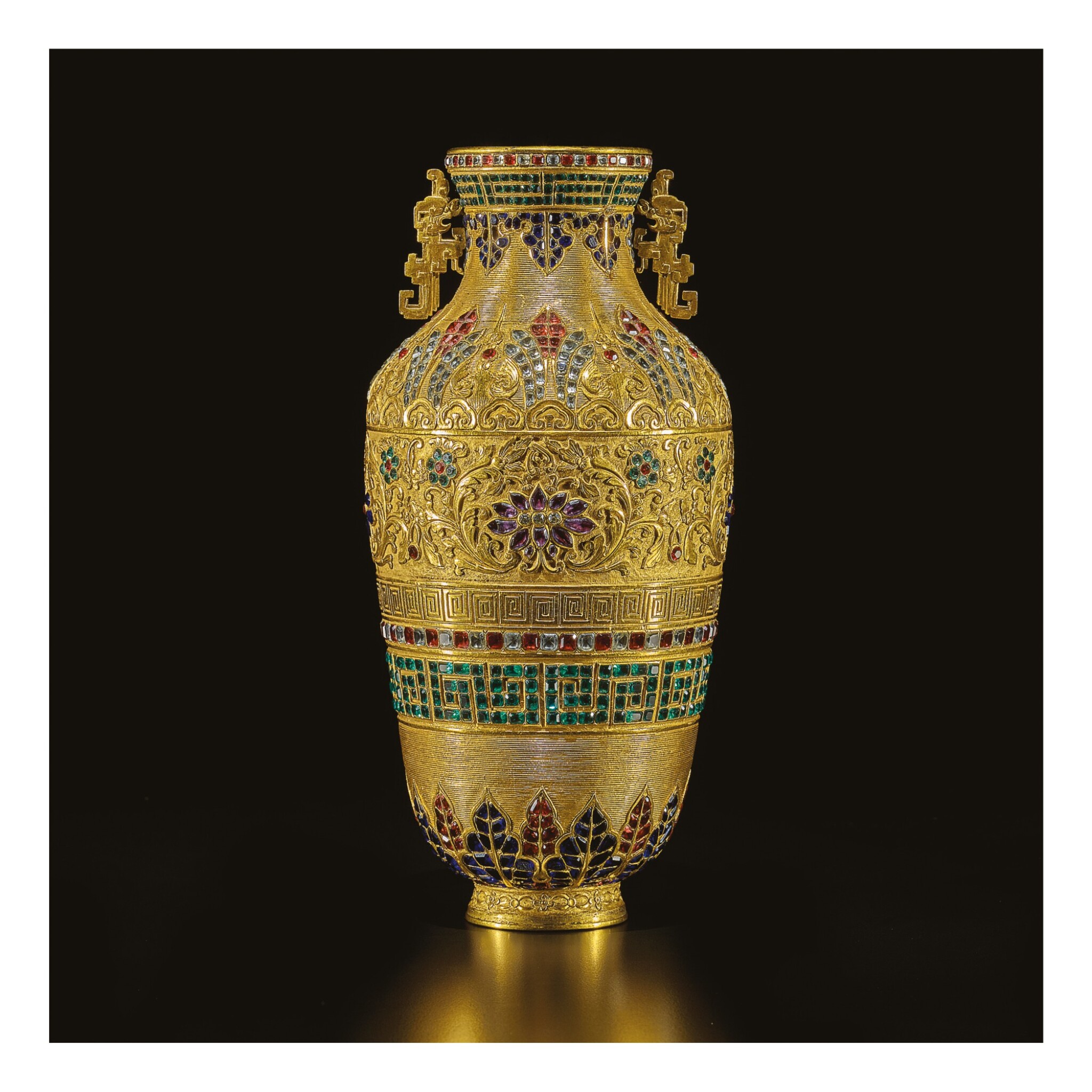 splendidly modeled with the slightly tapering sides rising from a short splayed foot to a gently rounded shoulder, surmounted by a waisted neck and galleried mouth, the neck flanked by a pair of chilong handles depicted in archaistic angular scrollwork, the body decorated in repoussé with a central frieze enclosing four large formalized floral blooms wreathed by curling foliage bearing small florets, between a band of stylized foliate lappets borne on a row of ruyi heads and two keyfret borders and a further band of upright lappets above the foot, the design with highlights vibrantly inset with multi-colored glass paste, the interior with a metal liner

The vase is in general good condition. The neck has two pairs of small infilled holes. One handle is slightly loose and there is a small slightly flattened area to the body, barely noticeable. There are occasional losses and minor bruises to the glass paste. Overall with some expected wear.

This remarkable vase is testament to the intellectual, cultural and material exchange between China and Europe in the 18th century. Brilliantly gilded and elaborately decorated, the paste-inset floral heads and the Rococo-inspired scroll, the band of ruyi heads and the chilong handles all exemplify the emergence of a new style that merged European and Chinese decorative motifs and techniques.

While the imitation of Chinese styles, known as ‘chinoiserie’ was popular at the courts in Europe during the 18th century, there was also a vogue for fine works of art in European style at the imperial Chinese court in Beijing. Starting in the Kangxi reign (r. 1662-1722), an increasing number of Jesuit artists were employed at the imperial court. Meanwhile, Guangzhou had become the main trading center with the West, and the first landing place for many Jesuit missionaries. Exposed firsthand to foreign objects and technology, Guangzhou craftsmen began to produce wares that adapted Western technology and designs to suit Chinese taste. On this vase, craftsmen used colored glass-paste stones that cleverly imitate precious stones, such as emeralds, rubies, sapphire and diamonds. The technique was borrowed from the West, where it was originally employed on small snuff boxes, pocket watches and clocks imported to China, but was quickly mastered by Guangzhou craftsmen.

Vases of this form and design are rare and only one closely related example, probably the pair to this vase is known: from the Speelman Collection, sold in our Chester rooms, 11th January 1984, and most recently offered in our Hong Kong rooms, 3rd April 2018, lot 3430.

Compare also a vase and cover, similarly decorated with glass-paste stones, from the Ann and Gordon Getty Collection, sold in these rooms, 18th September 2007, lot 151, and again at Christie’s Hong Kong, 28th May 2014, lot 3011; a large double-gourd vase, sold at Christie’s New York, 19th March 2008, lot 369; a censer in the National Palace Museum, Taipei, included in the Museum’s exhibition Limpid Radiance, Taipei, 2016, cat. no. 149; a mirror with a clock included in the exhibition Tributes from Guangdong to the Qing Court, Art Gallery, The Chinese University of Hong Kong, Hong Kong, 1987, cat. no. 80; and another lacking the clock, sold in our Hong Kong rooms, 15th November 1989, lot 572.