PROPERTY FROM THE HAUGE COLLECTION 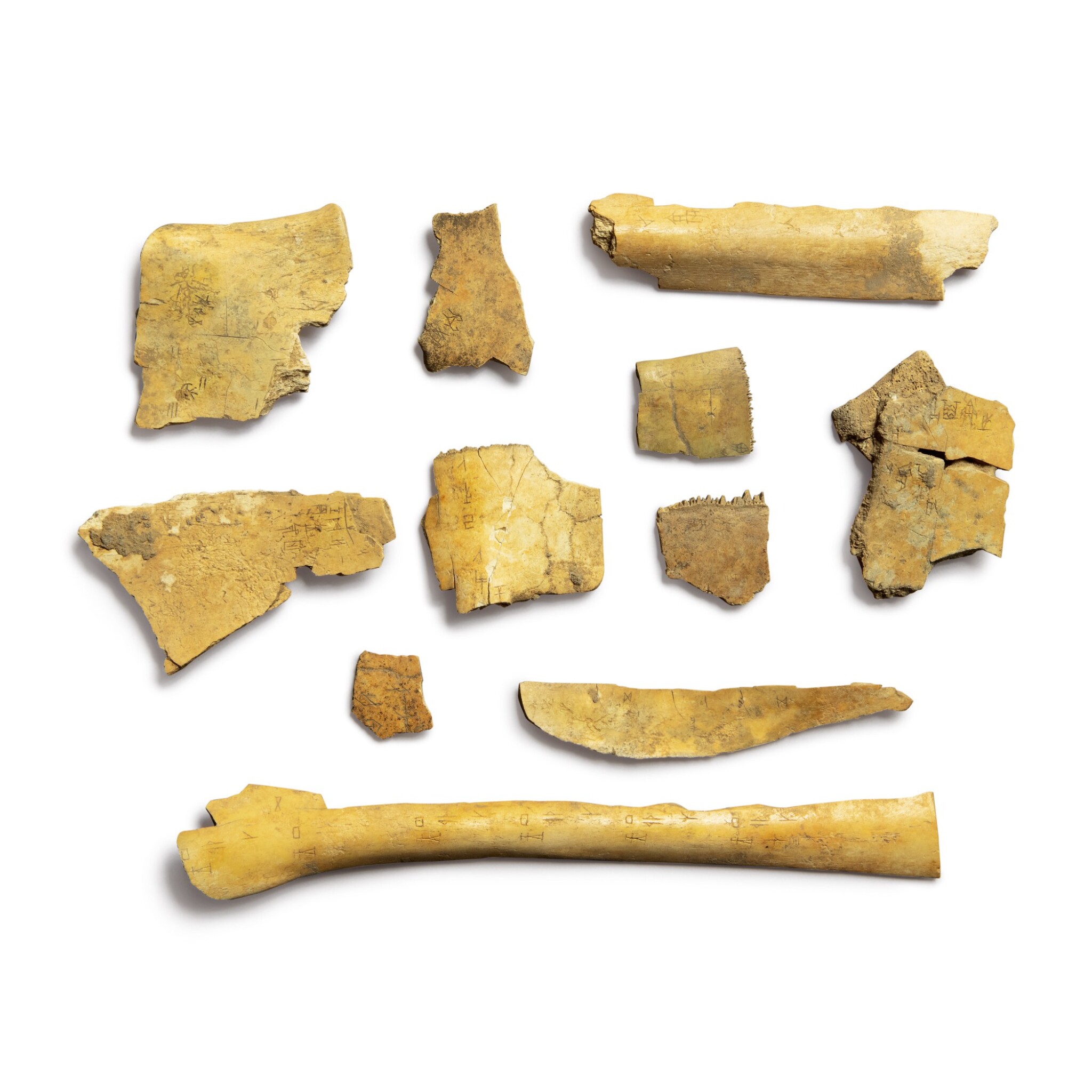 PROPERTY FROM THE HAUGE COLLECTION

A RARE GROUP OF ELEVEN ORACLE BONES WITH INSCRIPTIONS

of varied sizes and forms, all finely incised with characters recording pyromantic divinations, some with T-shaped cracks forming the zhao (omen) for interpretation, some with carved hollows and burnt marks on the reverse, fitted box (12)

The oracle bone inscriptions, jiaguwen, which literally translate to 'writings on shells and bones', are the earliest surviving writing systems in China. They were first discovered at the turn of the 20th century at Anyang, where the last capital of the Shang dynasty, Yinxu (circa 1300-1046), was located, and have since become a major subject in Chinese history and archaeology. While there are over 100,000 fragments of oracle bone inscriptions in various public collections, very few have appeared in the market in recent years. In addition to the present lot, a group of thirty-four oracle bones with inscriptions, formerly in the collection of Kobayashi Toan and well studied by the Japanese scholar Matsumaru Michio, was also sold in these rooms, 17th March 2015, lot 106.

The contents of the inscriptions are mostly related to divination, including on the topics of hunting, warfare, weather and fortunes. They also include scribes' writing exercises. The bones or shells used for inscribing are usually ox scapulas and turtle plastrons. It is believed that pairs of small circular and oval hollows were first carved to the underside of the specially prepared bone or shell. Intense heat was then applied to these hollows, which would cause the development of the T-shaped cracks due to thermal expansion. These cracks form the zhao (omen) for the diviners to interpret, and the result of the interpretations would then be recorded on the same piece of bone or shell. Inscriptions were first written with brush together with black or red pigments on the cracked surface, then incised with a bronze or jade knife. A typical example of oracle bone inscriptions includes four parts: the preface (xuci), the charge (mingci), the prognostication (zhanci), and the verification (yanci). However, majority of the bones and shells found are fragmentary, which poses challenges to the full understanding of their contents.

Though not fully standardized, oracle bone inscriptions are a mature writing system. The style of writing varies in different periods, and from different diviners’ groups. During the late Shang period, there were many diviners working under different kings, and some royal princes and relatives also employed diviners and scribes. The tradition of writing on bones and shells continued from the Shang dynasty into the early Western Zhou period, but soon disappeared. Nonetheless, oracle bone inscriptions are the direct ancestors of all the later forms of Chinese writing.