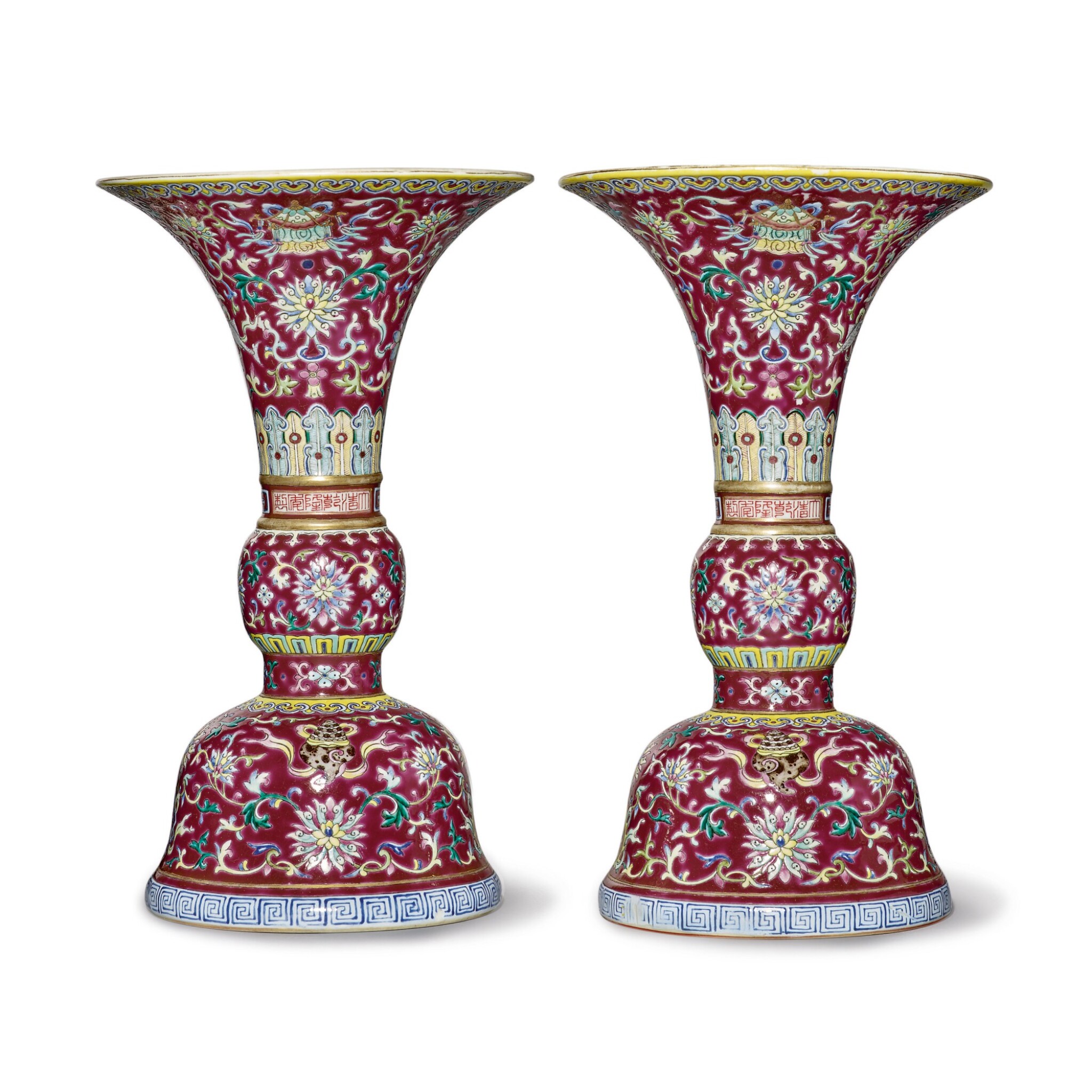 each of archaistic gu form, finely modeled with a trumpet neck above a central bulb and a bell-shaped foot, the gilt-rimmed neck decorated with four of the bajixiang emblems interspersed with leafy lotus scrolls between a band of ruyi-heads and an upright border of plantain leaves, all above a narrow cylindrical band enclosing a keyfret border and an iron-red six-character seal mark within a rectangular cartouche, the central bulb enameled with further lotus blooms borne on scrolling foliage between a pendent trefoil border and an upright lotus lappet band, above a further short narrow band of floral scrolls, all supported on the high foot enameled with the four remaining bajixiang emblems interspersed with further lotus scrolls between a ruyi-head border and a key-fret band, all delicately picked out in shades of rose pink, yellow, green, iron red and turquoise against a rich ruby-red ground, the registers divided by thin gilt raised fillets, the interiors of the neck and foot enameled in turquoise (2)

One vase with an approximately 8cm diagonal rim crack, with some small associated enamel flakes. The other in good general condition, with a short 3mm hairline to the unglazed foot. Both vases with some scattered enamel flakes, wear to gilding and light firing imperfections to the turquoise enamel.

A devout Buddhist and practitioner of Tibetan Buddhism, the Qianlong Emperor commissioned the furnishing of the Buddhist temples and ancestral halls with ritual vessels made from the finest materials, including cloisonné enamel, bronze and porcelain. Vases of this form belong to this group of ritual wares, which were produced in a range of color palettes and sizes, and likely formed part of five-piece altar garnitures.

A closely related vase in the Tu Huo Zhai Museum, Hangzhou, was included in the exhibition Treasures of Imperial Porcelain, Zhejiang Provincial Museum, Hangzhou, 2001, cat. no. 130. Compare also ruby-ground examples sold at auction, the first in our London rooms, 13th July 2005, lot 267, and the second in our Hong Kong rooms, 1st-2nd June 2015, lot 676. Compare also a yellow-ground vase of this type and with a Qianlong mark and of the period, in the Nanjing Museum, Nanjing, included in the exhibition Qing Imperial Porcelain of the Kangxi, Yongzheng and Qianlong Reigns, Art Gallery, The Chinese University of Hong Kong, Hong Kong, 1995, cat. no. 95; a coral ground example sold in these rooms, 8th October 2006, lot 1123 and a pair of doucai enamels sold in these rooms, 7th April 2015, lot 3707.

A complete set of altar garnitures with related designs which include two gu vases, decorated in doucai enamels, was sold in our Hong Kong rooms, 4th April 2012, lot 50, from the Meiyintang Collection; and another set, presented by Lord Kitchener to Sir Thomas Hohler, sold twice in our London rooms, 17th December 1980, lot 677, and again, 11th May 2011, lot 230.