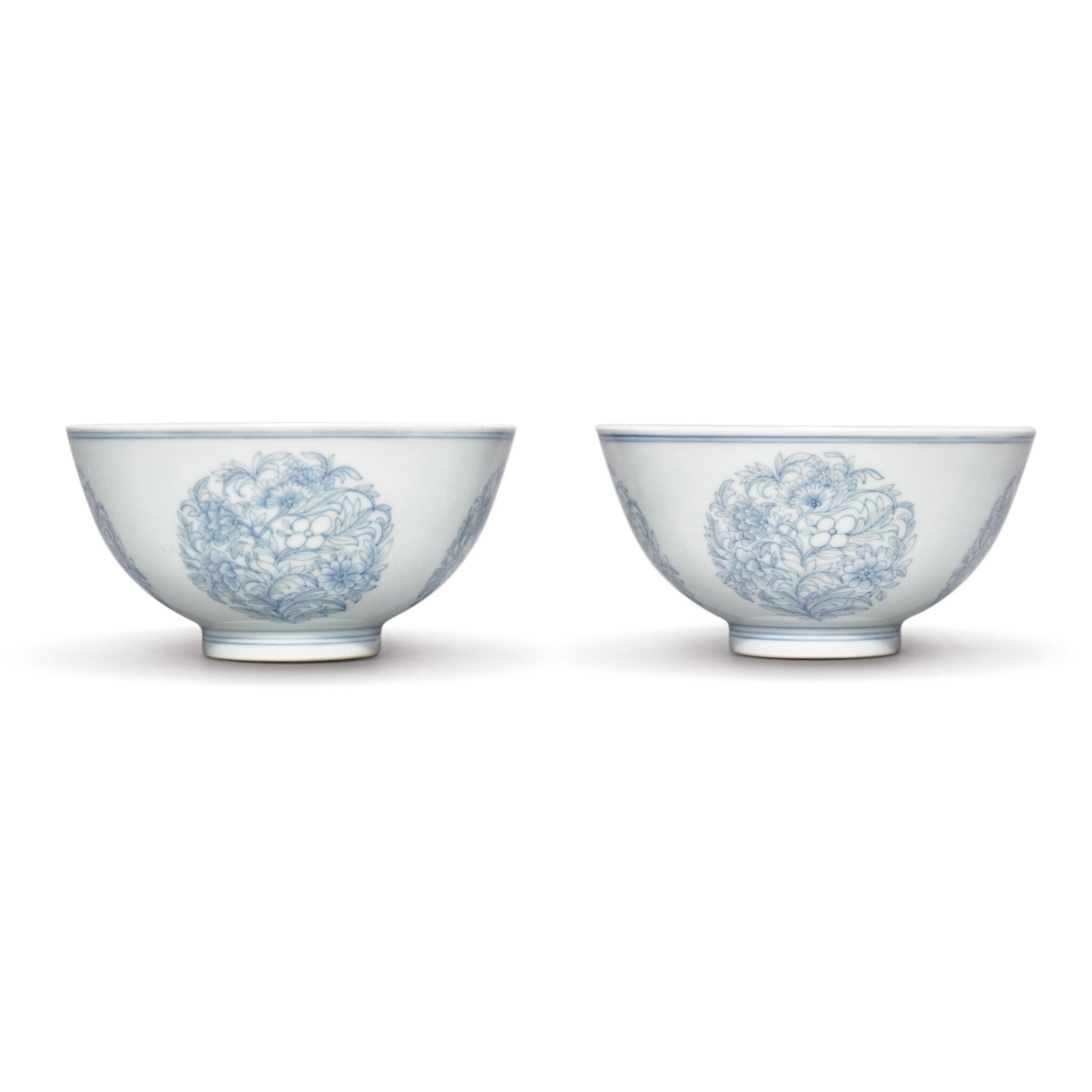 A PAIR OF FINE BLUE AND WHITE 'FLORAL' MEDALLION BOWLS

each bowl with steep rounded sides supported on a straight foot, the exterior with four finely painted cornflower-blue 'pencil-drawn' medallions each enclosing an array of flowering stems, set between double-line borders, repeated on the interior with a single central floral roundel, the base with a six-character mark in underglaze blue within a double circle (2)

Both bowls are in overall good condition, one with a pair of tiny burst glaze bubbles on the exterior, small firing tare to the body and frits to mouthrim; the other bowl with frits to mouthrim as well.

These bowls are outstanding for the fine penciled lines that illustrate complex circular designs of a variety of flowers. While the curling fronds and luxurious blooms capture the Western rococo influence popular at court during the reign of the Yongzheng Emperor, it remains rooted in Chinese tradition through the choice of flowers and overall design.

Bowls with this motif are known in both blue and white and doucai enamels. See, for example, an underglaze-blue-decorated bowl sold at Christie’s Hong Kong, 29th November 2017, lot 3008; and two doucai enameled versions in the National Palace Museum, Taipei, one published in Illustrated Catalogue of Ch’ing Dynasty Porcelain in the National Palace Museum. K’ang-hsi Ware and Yung-Cheng Ware, (vol. I), Tokyo, 1980, pl. 90, and the other in Enamelled Ware of the Ch’ing Dynasty, bk. I, Hong Kong, 1969, pl. 3.

This pair of bowls exemplifies the deft ability of Yongzheng potters to adapt and modify Ming design in a distinctly contemporary manner. The inspiration can be found in Chenghua mark and period doucai cups and bowls decorated with roundels of fruit and flower baskets, such as a reconstructed bowl recovered at the imperial kiln factory in Jingdezhen and preserved in the Palace Museum, Beijing, published in Imperial Porcelains from the Reign of Chenghua in the Ming Dynasty II, Beijing, 2016, pl. 158.