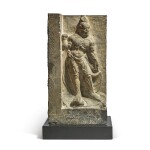 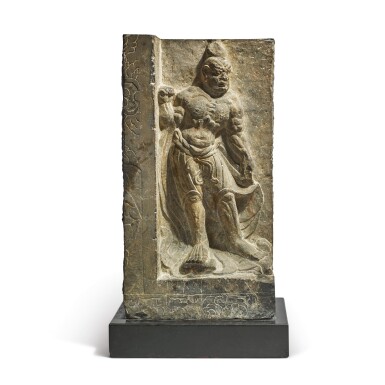 PROPERTY FROM AN IMPORTANT PRIVATE COLLECTION

A LIMESTONE RELIEF CARVING OF A GUARDIAN, TANG DYNASTY

PROPERTY FROM AN IMPORTANT PRIVATE COLLECTION

A LIMESTONE RELIEF CARVING OF A GUARDIAN, TANG DYNASTY

A LIMESTONE RELIEF CARVING OF A GUARDIAN

the muscular figure carved in high relief within a thick-walled L-shaped niche incised with floral and foliate patterns, with hips swayed to the right and head turned three-quarters, adorned in a loose skirt tied at the hips, a billowing sash draped over the right arm and held at the other end in the left hand, the face with a menacing expression and hair gathered in a topknot, stand (2)

Patches of soiling. Overall with some age-appropriate wear and scattered minor chips and losses to the edges (such as tip of hair, left face, left hand, left foot) as can be expected.

This figure of a guardian embodies many of the remarkable qualities of Tang dynasty sculptures, when China’s sculptural tradition reached its most developed phase. The powerful muscular body and vigorous stance enhance the graceful folds and subtle swaying of the skirt, while the facial features display the ‘spiritual naturalism’ characteristic of the period. The figure depicts a heavenly being with exaggerated features, but one also imbued with human qualities. The rectangular form of the carving as well as the slight disproportionate size of the left foot suggest that this piece was once placed on the lower left corner of a niche or entrance.

This figure shares similarities with sculptures from the Longmen cave complex in Henan province. Situated near present-day Luoyang, cave temples were built here from the Northern Wei (386-534) through the Tang dynasty, in particular during the reigns of Emperor Gaozong (r. 650-683) and Empress Wu Zetian (r. 684-704), who actively supported the spread of Buddhism. Compare for example the two dvarapala with similar features from the Jinandong cave at Longmen, which began to be built in 684, illustrated in situ in Zhongguo meishu quanji. Diao su bian [The Complete Series on Chinese Art. Sculpture], vol. 11, Beijing, 1998, pls 180 and 181, together with a figure at the Binyang cave, pl. 114, and a free-standing sculpture of a guardian, pl. 191; and two guardians in front of the Kanjing temple, built between 690 and 704 AD, illustrated in Longmen shiku [Longmen caves], Beijing, 1980, pl. 199.

Further related sculptures include three figures illustrated in Osvald Sirén, Chinese Sculpture, New York, 1970, vol. III-IV, pls 480a-b, 490, the first two in the University of Pennsylvania Museum of Archaeology and Anthropology, Philadelphia, and the third of much larger size from the David Weill Collection; and a figure included in An Exhibition of Chinese Sculptures, C.T. Loo & Co., New York, 1940, cat. no. 33.

Figures of fierce guardians with muscular bodies and wearing only a loin cloth are also known as dvarapala. Based on Hindu guardians, they were generally displayed in pairs outside the entrance of Buddhist temples, as they were believed to have the power to ward off evil spirits. In some Buddhist scriptures they are identified as Garbhavira and Vajravira, the former often depicted with his mouth opened uttering the syllable ‘a’, symbolizing the beginning of life, while the latter with his mouth closed making the sound ‘um’, such as the present figure.