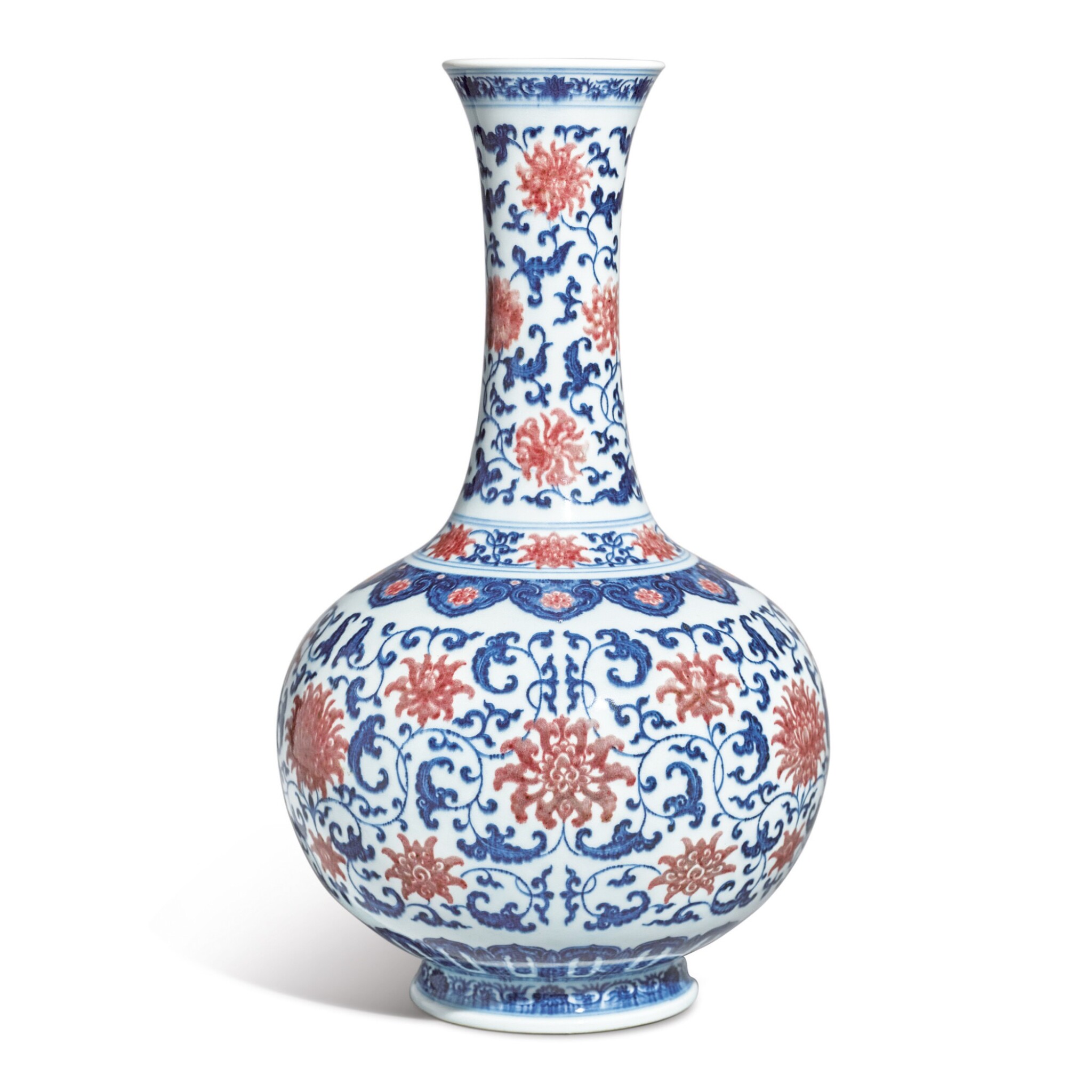 the globular body rising from a splayed foot to a tall, elegant waisted neck and a flared rim, superbly painted in rich cobalt-blue and copper-red tones with three registers of lotus blossoms varying in size and style borne on meandering leafy foliate scrolls, all between a band of upright petal lappets and chrysanthemum scrolls at the base and a band of pendent ruyi heads enclosing florets around the shoulder, the neck decorated with a composite flower scroll of lotus and chrysanthemum, between further bands of undulating lotus scrolls, the base with a six-character seal mark in underglaze blue

In overall good condition, a small original kiln bruise to the interior of the footring and an approx. 0.8 cm long faint firing line to the foot. The neck has a very slight lean, only noticeable at a certain angle.

This expertly painted vase reveals the Qianlong Emperor’s taste for porcelain wares that were stunning, technically innovative and yet rooted in antiquity. During the reign of the Qianlong Emperor and under the direct supervision of Tang Ying (1682-1756), the preeminent Superintendent at Jingdezhen, craftsmen of the imperial kilns strived to create novel designs that combined elements from China’s glorious porcelain tradition with innovative forms and techniques. This vase testifies to this trend; its style of painting, motif and choice of palette provide an immediate reference to the great works of the Yuan (1279-1368) and Ming (1368-1644) dynasties, while its form and the exquisitely painted band of ruyi and florets at the shoulder are characteristic of the decorative arts of the 18th century. The result is a striking vessel that appears at once both familiar and fresh.

Vessels painted with contrasting designs in underglaze blue and red were first made at Jingdezhen during the Yuan dynasty. This palette, which was very rarely used, was largely abandoned after the Xuande reign (r. 1426-35), due to the difficulty in controlling the pigment. Copper red was notoriously difficult to fire and required precise control of the firing temperature and atmosphere inside the kiln, and often yielded blurred designs that were considered unsatisfactory. New techniques that allowed control of the pigment were developed in the early Qing dynasty, and by the Qianlong reign the priority was achieving a vibrant and rich tone of red, as on this vase. The Qianlong Emperor’s insistence on excellence is noted in a court record of 1738, where he rated the color of a copper-red meiping with dragon design as not good enough (Feng Xianming, Annotated Collection of Historical Documents on Ancient Chinese Ceramics, Taipei, 2000, p. 232).

This vase is very rare and only one closely related example appears to have been published, in the collection of the Tibet Museum, Lhasa, illustrated in Xizang bowuguan cang Ming Qing ciqi jingping/ Ming and Qing dynasties ceramics preserved in Tibet Museum, Beijing, 2004, p. 122 (fig.1). Compare also a vase of similar form but with slightly different decorative bands at the shoulder, sold in our Hong Kong rooms, 17th May 1988, lot 198. A similar floral motif in underglaze red and blue is found on meiping vases, such as one with a Qianlong mark and of the period, sold in our London rooms, 16th June 1999, lot 810, and again at Christie’s London, 10th May 2011, lot 276; and an unmarked example in the Palace Museum, Beijing, illustrated in The Complete Collection of Treasures in the Palace Museum. Blue and White Porcelain with Underglaze Red (III), Hong Kong, 2000, pl. 207.