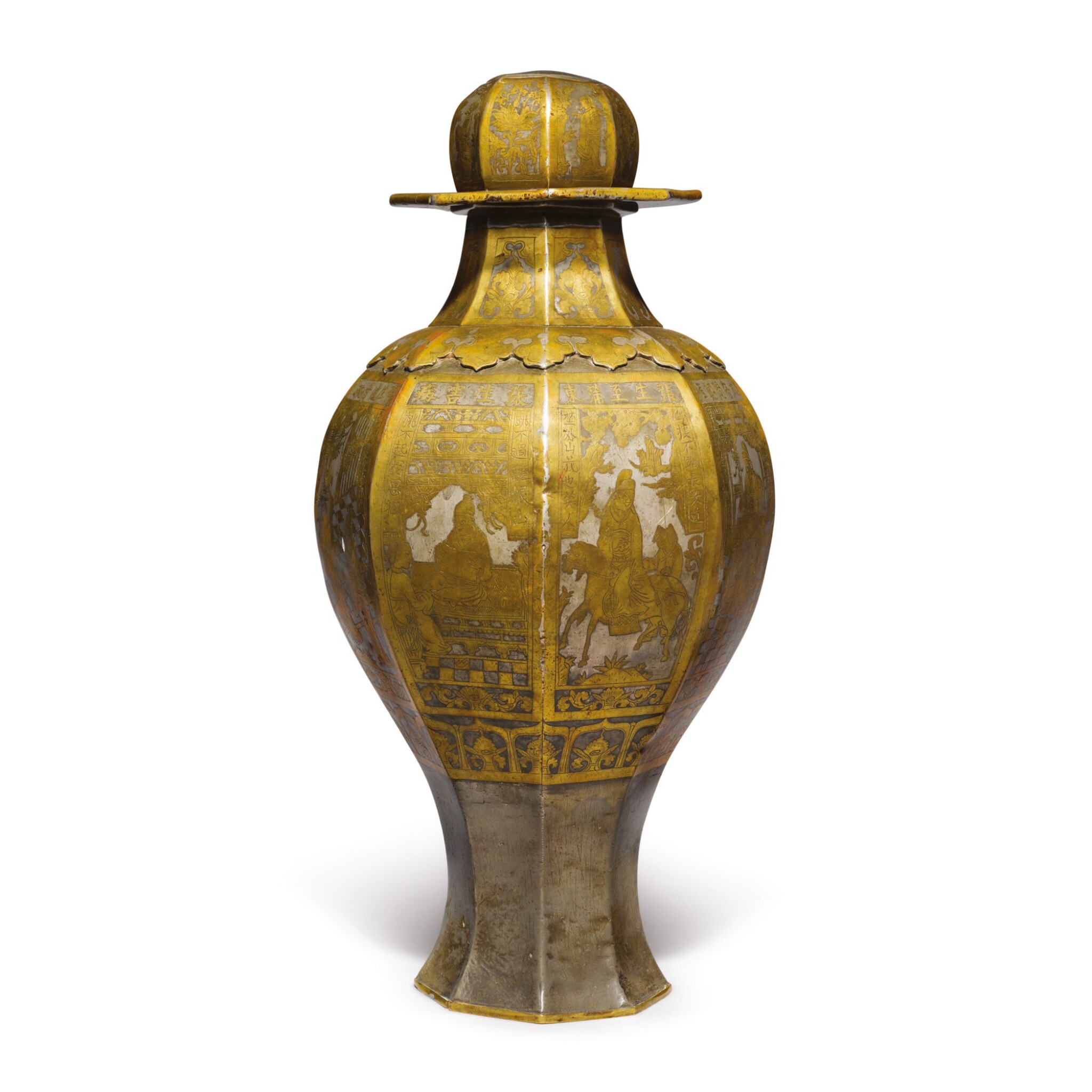 the octagonal faceted body rising from a spreading foot to a lipped rim, the body incised and inlaid with eight panels enclosing scenes based on episodes from the Romance of the Western Chamber (Xixiang ji), each depicting figures engaged in various pursuits and accompanied by titles and descriptive couplets, all below a continuous band of ruyi-head lappets to the shoulders, the neck inscribed with Wanli liunian eryue shisiri zao (made on the fourteenth day, second month and the sixth year of the Wanli period) and jiangren Yantong Zhaozibao erren zao (made by artisans Yan Tong and Zhao Zibao), the cover with a large domed knop also divided into eight facets featuring alternating senes of figures and flowers (2)

In overall good condition. Small losses to the bronze around the edges. Small dents and nicks to the extremities. Expected surface wear and scratches. Minor casting flaws like small gaps. An old label to the bottom.

Widely acknowledged as one of the most popular love stories in Chinese literature, Romance of the Western Chamber first appeared in the Tang dynasty in a short story by Yuan Zhen ‘The Story of Yingying’. It continued to be retold and elaborated upon reaching a more definitive form in the 13th century in the version written by Wang Shifu. The play, set in the Tang dynasty, relates the travails of love that beset a young aristocratic beauty, Yingying, and an aspiring scholar, Zhang Sheng. Contemporary chronicles and imagery produced in different media attest to the play's enduring popularity. Romance of the Western Chamber was so famous that series of woodblock prints were created in the late Ming dynasty reproducing key dramatic moments from the play. These prints proved to be a very useful resource in providing a visual template that allowed artists to more readily satisfy the demand for the subject matter whether destined for the imperial household or for mass consumption.

The present vase illustrates several scenes based on the woodblock prints. Among the scenes depicted are, 'Zhang Departs for the Capital' when the lovers sorrowfully part as the young scholar sets out to take the imperial examinations; and 'Zhang Sheng visiting Pujiu Temple' depicting Zhang Sheng being shown around the monastery by the abbot but distracted by the beautiful Cui Yingying who strolls in the garden with her attendant Hong Niang.