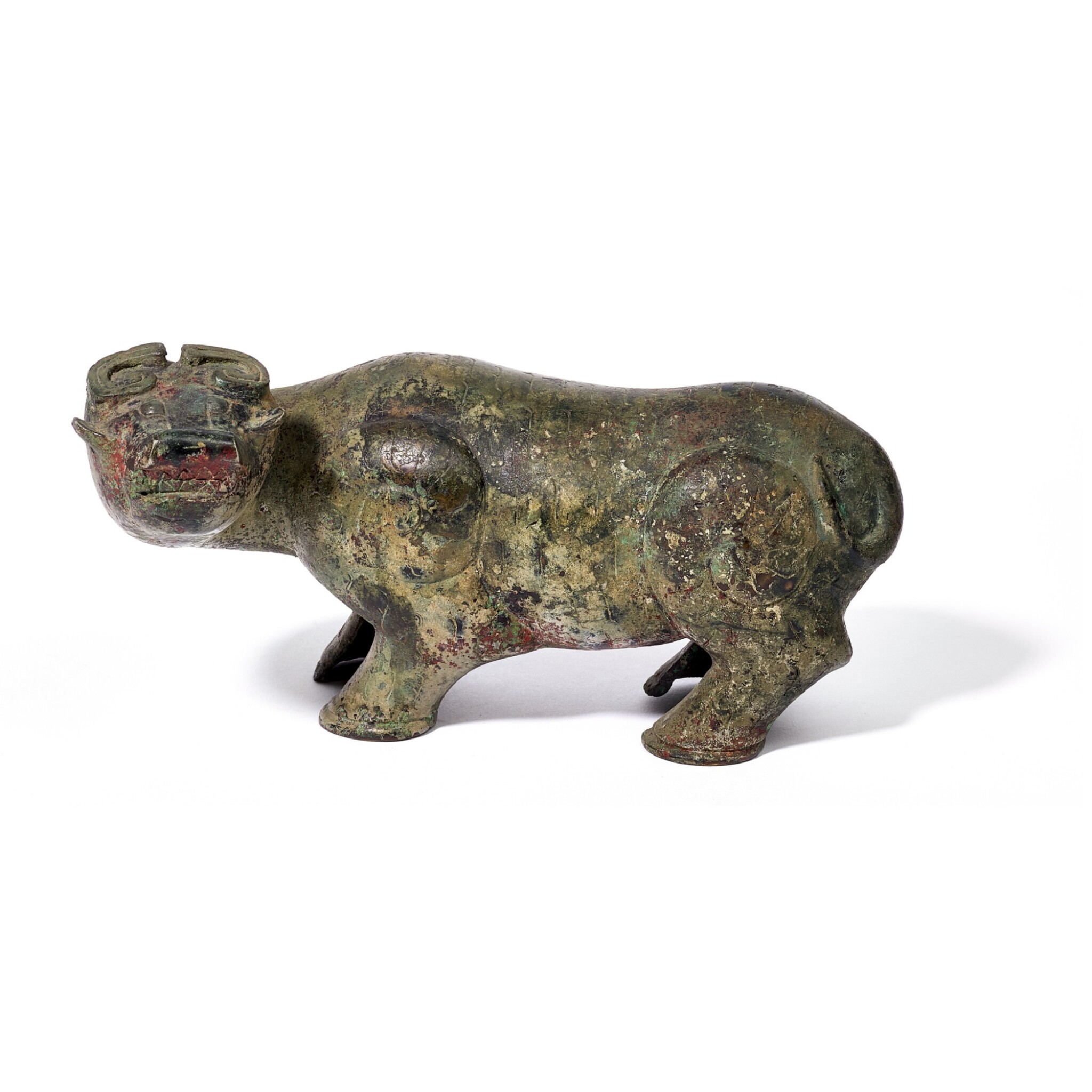 A BRONZE FIGURE OF A BUFFALO

the stocky animal cast standing four square with its head turned to the left, the body with a pattern of recessed F-shaped motifs, with spirals to the hind and forelegs, the short tail curled over the near flank, the head with its mouth agape to reveal the teeth, with two long grooved horns and a diamond motif on the forehead, the underside open, the legs of hollow C-section, the bronze patinated to a smooth pale green tone

A few expected casting flaws throughout. Its right side of the neck, right shoulder, right belly, the hips have restored patches. There's a restored break to its right foreleg.

X-ray film is available upon request.

Collection of Alan and Simone Hartman.

Robustly cast in the form of a buffalo, this figure embodies the characteristics of Zhou sculpture, demonstrating the craftsmen's attempt to capture the vital energy of creatures rather than a precise and naturalistic rendering. The muscular legs and bulky body emphasize the strength of the creature, its power accentuated by the swirling linear pattern that rises from the sturdy legs and the stylized facial features with large curled horns. The open mouth and turned head give a feeling of suspended motion or latent energy.

In its powerful depiction, this figure points to the central role buffaloes played in agriculture. Important accomplishments of the Zhou dynasty included advancements in irrigation, such as drainage, waterways, canals and dams. They developed iron tools during this time, including iron-tipped ox-drawn ploughs. Furthermore, soldiers wore either a sleeveless coat of buffalo or rhinoceros hide or boiled leather armor for protection.

A number of buffaloes of this type are recorded and are believed to have been used as stands or feet for large vessels. Some face right while others face left, indicating they came in pairs or fours. See a closely related buffalo illustrated in Tch’ou Tö-yi, Bronzes Antiques de la Chine Appartenant a C.T. Loo & Cie, Paris, 1924, pl. 19, and another, with the head turned to the right, formerly with Yamanaka & Co. and J.T. Tai Ltd., sold in these rooms 13th September 2017, lot 72.

Related figures with sockets on the back are more commonly known; one from Earl and Irene Morse and Stoclet Collections, illustrated and exhibited on numerous occasions including the Metropolitan Museum of Art, New York, in 1982, was sold in these rooms, 3rd December 1986, lot 18; another was exhibited in Chinesische Kunst, Preussische Akademie de Künste, Berlin, 1929, cat. no. 9; one, from the Kunstindustrimuseum, Copenhagen, was included in The Exhibition of Early Chinese Bronzes, Museum of Far Eastern Antiquities, Stockhom, 1933, cat. no. XX; another in the Pillsbury Collection, is published in Bernhard Karlgren, A Catalogue of Chinese Bronzes in the Alfred F. Pillsbury Collection, Minneapolis, 1952, pl. 105; and a fifth example sold in our London rooms, 13th-14th November 1972, lot 230.