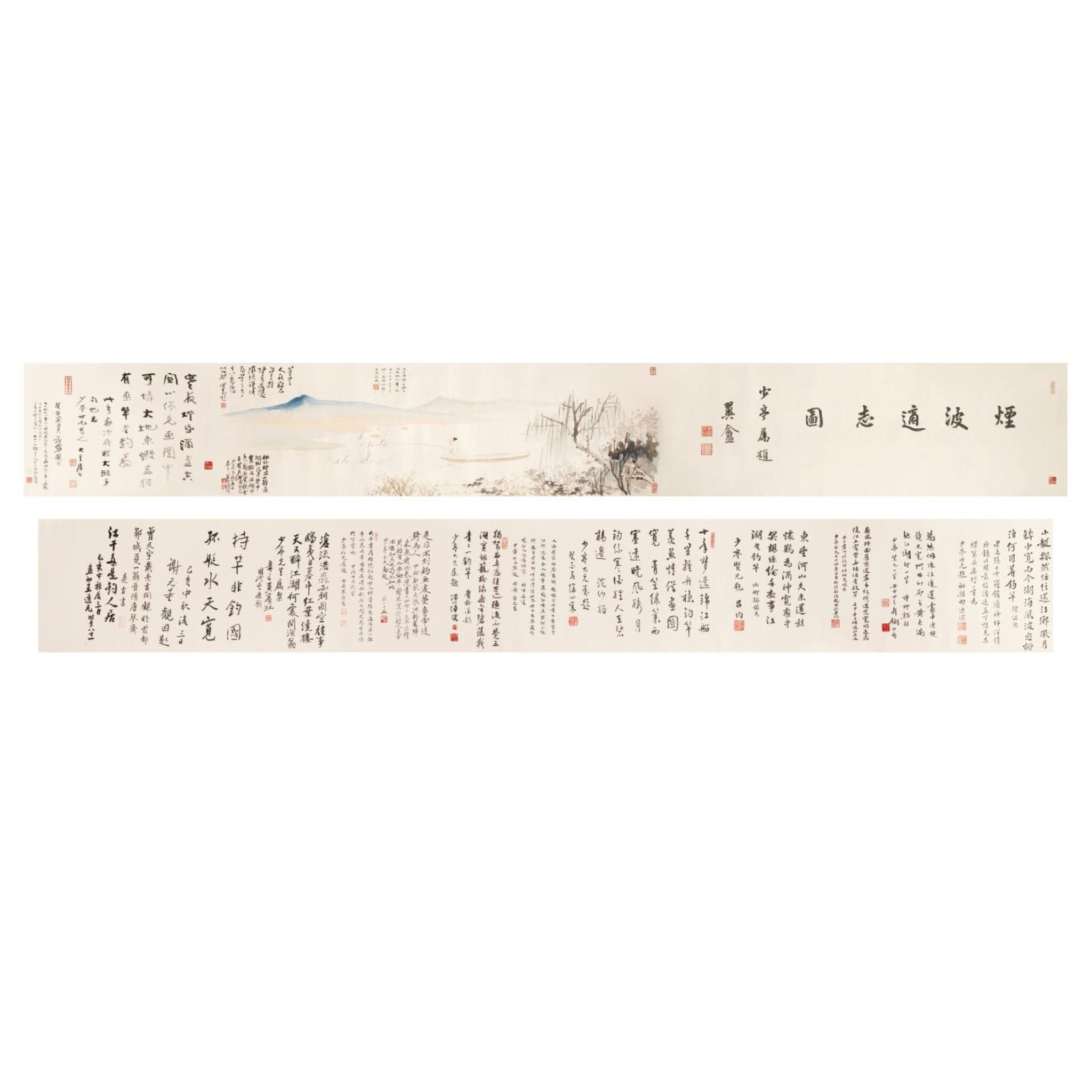 PROPERTY FROM A DUTCH FAMILY COLLECTION

Ink and colour on paper, handscroll

signed, inscribed, with two seals of the artist

Overall wear to the textile cover which is missing the toggle.

There's number marks in pencil at the bottom of each colophons.

The painting is in overall good condition with some very minor foxing and discoloration to the paper.

Please note the condition report for this lot has changed. 此拍品品相報告有所更改。

Zhang Daqian (1899–1983), original name Zhang Yuan and pseudonym Daqian, is considered one of the most famous and prolific Chinese artists of the twentieth century, known for the many different painting styles he mastered over his long career. His early works made before he left China in 1949 show the influence of ancient masters as Zhang spent his formative years in Shanghai receiving traditional painting instructions from two famous calligraphers and painters of the time, Zeng Xi and Li Ruiqing. As part of his training, he studied and copied works by ancient masters in detail excelling in all types of paintings in the ancient style, especially landscapes, and enjoying great success. In the 1920s, Zhang Daqian moved north to Beijing where he quickly integrated himself in the cultural circles of Beijing where a generation of traditional literati-painters mingled with a younger generation of idealistic men and women familiar with both Eastern and Western culture.

Among the artists Zhang met and befriended in Beijing in the 1920s and 1930s are well known figures such as Wu Hufan, Pu Xinyu and Huang Binhong, whose upbringing and backgrounds were similar and whose interests in traditional Chinese arts and culture mirrored those of Zhang Daqian. Some of these artists and calligraphers closely collaborated with Zhang Daqian during this phase and the annotations on the present painting demonstrate the close bonds and deep appreciation of this close-knit circle.

All the figures in this circle shared a deep passion for and knowledge of ancient Chinese art and culture and all of them faced the struggle to adapt to fast-changing world of early 20th century China, a time of unprecedented social and political change in China. The works they produced during this period and the individual styles they developed also reflect their fascination of the Western perception and approach towards Chinese art.

The scroll bears a titleslip by Zhu Wenjun (1882-1937), a descendant of the great philosopher of Zhu Xi (1130-1200). Zhu Wenjun was a noted connoisseur of Chinese paintings who had graduated from the University of Oxford in 1908 and who started working in the newly founded Palace Museum in 1926. Zhu Wenjun’s collection of Buddhist scrolls, paintings, bronzes, jades and ceramics was regarded as the ultimate art collection in his time and was donated by his family to different museums in China many years after his death.

Wu Hufan (1894-1968), was the son of eminent 19th century collector Wu Dacheng, and himself an eminent collector, painter, calligrapher, poet and writer, descended from a long line of eminent scholar-officials. A traditionalist, he too had been trained as a classicist and spent his life emulating traditional painting and calligraphy styles in his own works, with a strong focus on traditional landscapes of the Song and Yuan dynasties. Peers with deep respect for each other, Zhang Daqian and Wu Hufan often dedicated paintings to each other, adding personal and poetic inscriptions on their respective works such as on this scroll here.

Pu Xinyu (1896-1963) too was a painter and calligrapher trained in the traditional style. A nobleman, he was a member of the Manchu Aisin Gioro clan, the ruling house of the Qing dynasty, and was the cousin to Puyi, the last Emperor of China. While in Beijing, Pu Xinyu and Zhang Daqian began to collaborate and together became known as the “South Zhang and North Pu,” an epithet that is still used to refer to their collaborative works of the 1930s.

Yu Feian (1888-1959) also was part of the artistic circle into which Zhang Daqian immersed himself in Beijing in the late 1920s and 1930s. Known for his ‘realistic’ painting style, his paintings are based on the meticulous painting style of the Song emperor Huizong’s works reflecting the interest in realism which emerged under the stimulus from Western art. In 1935, Yu Feian and Zhang Daqian held a collaborative exhibition in Beijing.

Huang Binhong (1865-1955) was another fellow artist and writer who studied and emulated the traditional style of painting and later became one of China’s best-known modern painters. In his 1934 treatise ‘Principles of Painting’ (huafa yaozhi), Huang advocated the study of Tang and Song painters and their works to ‘trace the past as to initiate the future’. This commitment to artistic continuity and the reinvigoration of brush-and-ink painting positioned in the elite tradition of literati painting was repudated in a time of profound political change. Huang was a key figure in the artistic circle around Zhang Daqian.