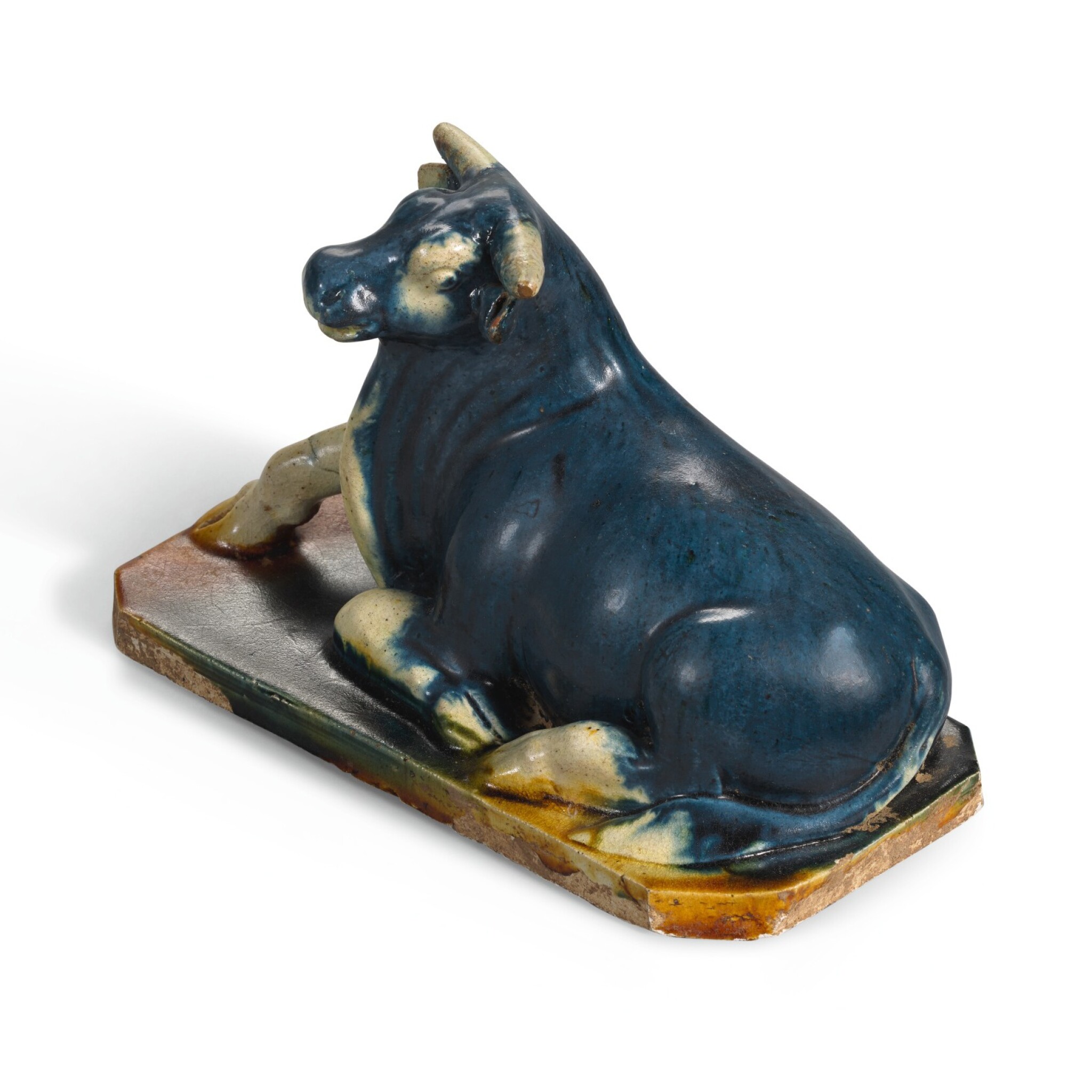 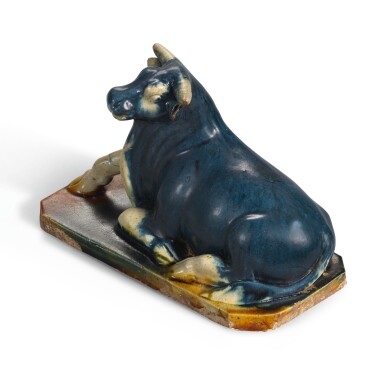 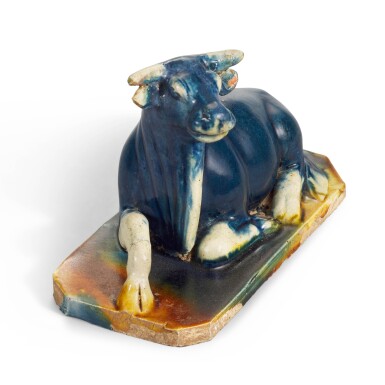 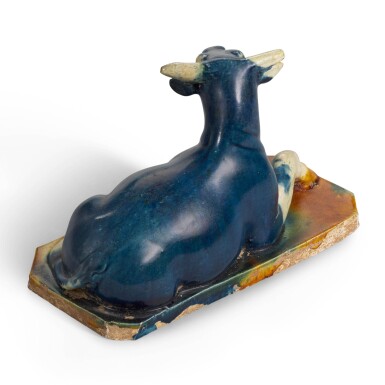 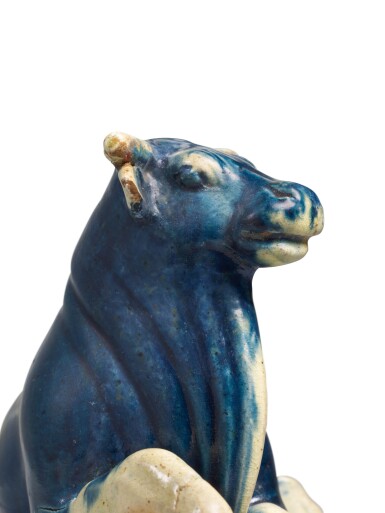 naturalistically modelled as a recumbent buffalo resting on a bent leg and the other stretched out, with its head turned slightly upwards to the left, the body defined by taut muscles and a strong curved spine terminating in a tail sweeping over its rear haunches, covered overall in vibrant blue glaze pooling to deep indigo tones with straw-glazed highlights, resting on an amber and blue-glazed base

The buffalo has several small areas of over-painting to the blue glaze around the top of the head, the base of the horns, the jaw, the back and both sides of the neck.

The dating of this lot is consistent with the result of a thermoluminescence test, Oxford authentication Ltd., no. C111n23.

Covered in a brilliant blue glaze, this figure of a buffalo is impressive for the naturalistic and sophisticated modelling of its body and pose, which capture the inner strength and gentle nature of the animal. Stemming from a long tradition of producing ceramic sculptures to be housed in tombs, its fine modelling and deep blue glaze encapsulates the adventurous and international spirit of the dynasty.

It is a particularly rare example of sancai animal sculpture for two main reasons: its reclining pose is seldom found among extant examples of ceramic buffaloes. Traditionally a domestic animal associated with agriculture, figures of buffaloes were more commonly made standing and at times harnessed, as they were used to draw carts. The reclining pose, on the other hand captures the animal’s bucolic character and evokes the essence of life in the countryside, concepts that became more prevalent in the later Song dynasty (960-1279). This figure is also rare for its use of cobalt oxide, which at the time was extremely expensive as it was imported from Central Asia. Very few ceramic sculptures of animals are known covered in cobalt, and its use on this piece attest to the wealth of its owner.

The Tang dynasty represents one of the richest chapters in the history of ceramic art in China, when potters tested the limits of the medium and ceramic wares began to be considered as an art form. When glazed pottery vessels, animals and objects of daily life first became popular burial furnishings in the Han dynasty (206 BC- AD 220), they were conceived as humble reproductions of valuable items that would serve the deceased in the afterlife. In the Tang dynasty, these sculptures and vessels became increasingly rich in their colouration and ornamentation, as they became symbolic of status and wealth. Sculptures such as the present were commissioned by aristocratic and royal families, and were paraded through the metropolitan centres of north China during funeral processions. Hence the blue glaze of the present piece would have revealed its owner’s wealth both to the spirits, and to those participating in the funeral procession.

While the majority of Tang tomb sculptures show a certain level of standardisation, depictions of reclining buffaloes are rare, and only a pair of closely related buffaloes, but glazed predominantly in green, appears to be known: they were included in the Min Chiu Society exhibition In Pursuit of Antiquities, Hong Kong Museum of Art, Hong Kong, 1995-6, cat. no. 85. See also a reclining sancai-glazed mythical beast, in the collection of the Tenri Sankokan Museum, Nara, illustrated in William Watson, Tang and Liao Ceramics, London, 1984, p. 230.

A standing blue-glazed buffalo with a boy on its back was included in the exhibition Tang Sancai Pottery. Selected from the Collection of Alan And Simon Hartman, The International Ceramics Fair and Seminar, London, 1989, cat. no. 15; another in the Freer Gallery of Art, Washington D.C., accession no. F1949.26, is published on the Museum’s website: accession no. F1949.26; and a standing blue-glazed donkey is in the Shaanxi History Museum, Xi’an.