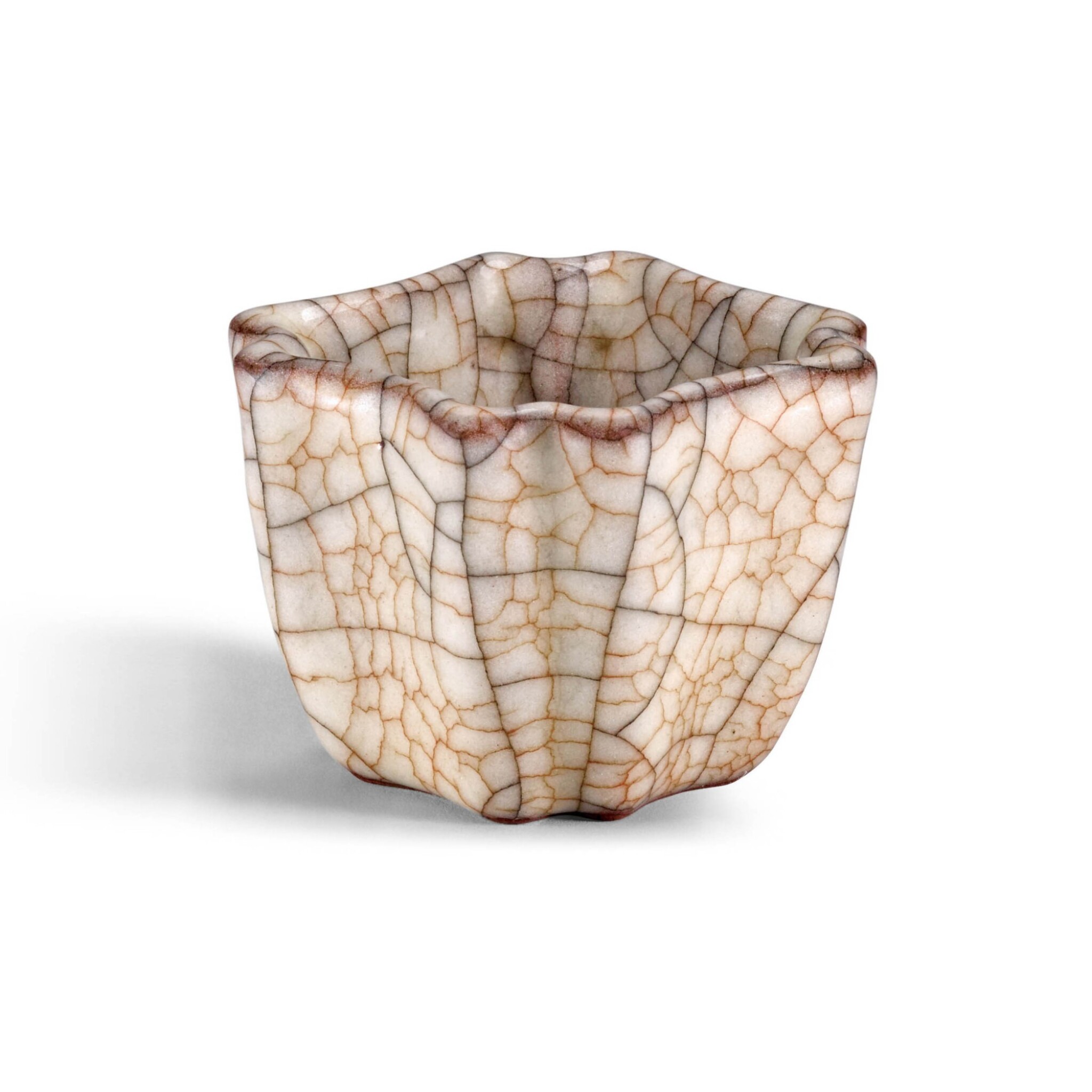 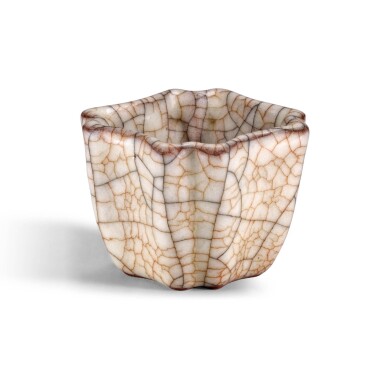 of quatrelobed form, the gently flaring sides rising from a countersunk base, covered overall including the base with an opaque glaze of soft greyish tone suffused with a matrix of iron-wire crackle and golden threads, thinning at the rim and foot to reveal the dark-brown coloured body underneath

The cup has a minute frit to the rim and three burst glaze bubbles (two below the rim and one on the base).

This delightful cup is modelled on one of the most enigmatic wares of the Song dynasty, geyao. Understated in its modest size, simple form and luscious glaze, it displays the coveted jinsi tiexian, with its fine underlaying network of rust-brown (golden threads) and large dark-stained (iron wire) crackles. The more usual form for ge brush washers is a flower shape with five or more sides, but of this particularly exquisite square shape with indented corners, only a few washers appear to be recorded. A related cup also attributed to the Yuan or Ming dynasty, in the Sir Percival David collection and now in the British Museum, London, is published in Illustrated Catalogue of Ru, Guan, Jun, Guangdong and Yixing Wares in the Percival David Foundation of Chinese Art, London, 1999, pl. 68.

For the Song prototype, see one in the Palace Museum, Beijing, illustrated in The Complete Collection of Treasures of the Palace Museum. Porcelain of the Song Dynasty (II), Hong Kong, 1996, no. 21, where it is attributed to the guan kilns, but further illustrated and described as ge in Bian Yiwen, Zijincheng de jiyi. Tushuo Qinggong ciqi dang’an. Wenfang juan. Wenfang ci tezhan [Recollections of the Forbidden Palace. A file of Qing Palace ceramics illustrations and descriptions. The Study Room volume], Beijing, 2016, p. 155; another, included in Giuseppe Eskenazi in collaboration with Hajni Elias, A Dealer’s Hand: The Chinese Art World Through the Eyes of Giuseppe Eskenazi, London, 2012, pl. 267, from the collection of Dr. P.H.D.S. Wikramaratna, subsequently sold in our Hong Kong rooms, 2nd April 2018, lot 3046; and a third, from the Edward T. Chow collection, sold in these rooms, 16th December 1980, lot 293.