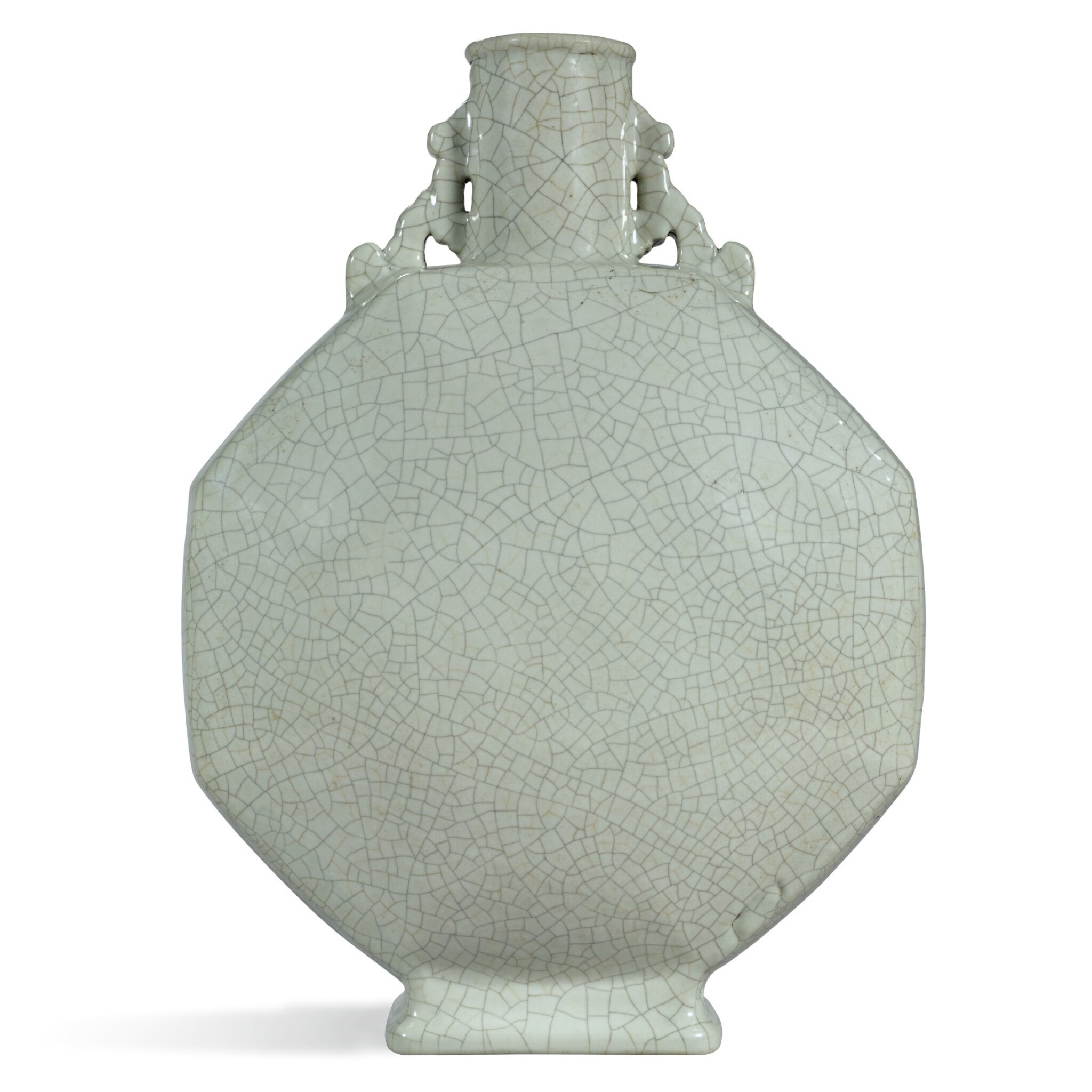 PROPERTY FROM AN IRISH PRIVATE COLLECTION

the octagonal body rising from a rectangular splayed foot to a tall cylindrical neck flanked by a pair of openwork archaistic handles, covered entirely with an unctuous creamy-grey glaze suffused with a matrix of grey and golden crackles, the footrim covered in a dark brown slip, the base inscribed with a six-character seal mark in underglaze blue

The flask is leaning to one side. It has very minor scattered glaze firing imperfections including glaze pulls and iron-spots. Otherwise it is in very good overall condition.

Acquired by the grandfather of the present owner and thence in the family by descent.

This magnificent moonflask is representative of some of the most challenging porcelain shapes, sizes and glazes made under the reign of the Yongzheng emperor. The simplicity of its form and glaze is deceptive as it made the greatest demands on the technical skills that only the most sophisticated and experienced potters working in the Imperial workshops could handle. In form and glaze it embodies the Yongzheng emperor’s fascination with antiquity and his passion for archaism. Both its form and glaze are borrowed from sources in Chinese antiquity which under Yongzheng's demands served as a source of inspiration for innovation. From the first year of his reign, the Yongzheng emperor commissioned items from the Palace Workshops, whose output changed in nature as a result. Simplicity of form and absence of decoration were stylistic trends introduced by Tang Ying (1682-1756), Superintendent of the Imperial kilns in Jingdezhen. Under his supervision, research into celebrated Song wares such as Ru, Guan, Ge and Jun saw the re-emergence of monochrome porcelains covered in luminous yet deceptively simple glazes which were made to simulate earlier wares on both contemporary and archaistic forms.

The unctuous crackled creamy-grey glaze that covers the entire surface of this moonflask was made in imitation of Ge ware, one of the ‘Five Great Wares’ of the Song dynasty (960-1279). During the Yongzheng reign, porcelain shapes were developed and made that were rooted in antiquity or uniquely conceived. These deceptively simple yet technically challenging archaistic shapes were then used as the basis for one of the Song-inspired glazes, in this case a Ge-type glaze.

The present octagonal flak retains only a basic relationship to the original form, an archaic bronze bianhu. The potter who conceived the shape of the present vase rejuvenated the form, maintaining the original faintly elliptical, circular outline of the archaic flask and combining it with the angular planes of an octagon. The new shape was then covered with a Ge-type glaze, successfully mixing contemporary and archaic aesthetics.

Vases of this impressive size and unusual shape are rare. One closely related flask, in the Palace Museum, Beijing, is published in Qingdai yuyao ciqi, vol. 1, pt. II, Beijing, 2005, pl. 172; another example was sold at Christie’s Hong Kong, 2nd December 2015, lot 3104; and a third vase of this shape, size and glaze, possibly the pair to the present moonflask, was sold at Bonhams London, 17th May 2012, lot 303.