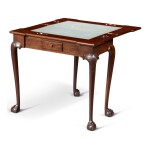 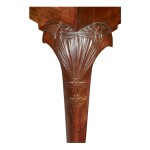 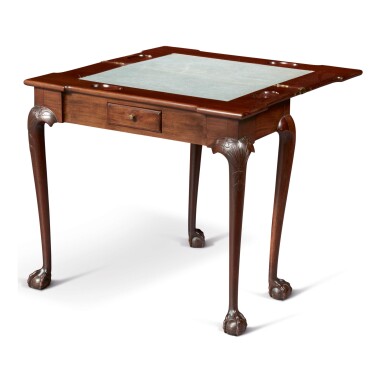 Surface has been cleaned and a varnish applied. Drawer retains original brass knob. Hinges were once located under playing surface and have now been removed and patched. There are hinges visible on either side of the playing surface and by side hinges. The baize playing surface has been replaced. It originally has a teal blue leather covering. In the nineteenth century a piece of wood measuring 7 3/4" by 4 7/8" was applied to the interior surface of the facade to the left side of the drawer to stabilize shrinkage cracks. Piece broke out of rear right leg at knee juncture to skirt and repaired. Right rear side return replaced. Retains an accession number (1970.394) on underside of left rear rail. Another set of surface hinges were added at one time. The rear right leg broke out and has been re-glued. The top has been reset several times and has numerous glue blocks. The top of the back swing gate has been shaved. The top of the leg has lost ¼ inch in height. One glue block has been added to the bottom of the right front drawer runner, White pine secondary wood.

This card table is distinguished by its small size and fine carving to the knees and returns. A slightly larger, related card table features shell carved knees but offers single pendant husks (see Sotheby's, New York, Important American Furniture and Folk Art, October 14, 1989, sale 5905, lot 321). The carving to the returns, the rather straight cabriole legs, and the shape of the claw-and-ball feet also appear on a high chest of drawers (see Leigh Keno American Antiques advertisement, Magazine Antiques, May 1994, p. 619). The carved legs are similar to designs by the Boston carver John Welch, an artisan who carved numerous picture frames for John Singleton Copley and who had several important architectural carving commissions. For an example of Welch's carving, see Alan Miller "Roman Gusto in New England: An Eighteenth-Century Boston Furniture Designer and His Shop", American Furniture, ed. Luke Beckerdite, (Hanover, NH, Chipstone Foundation, 1993), p. 170, figs. 11 and 12. Comparisons of the carving on this table and on Welsh's architectural work however do not warrant an attribution to Welsh for the present table.