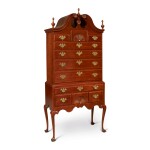 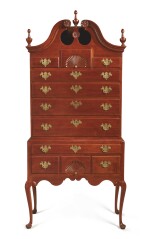 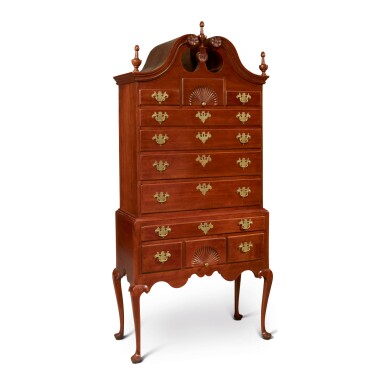 This high chest displays a form and decorative vocabulary consistent with case pieces made in the Glastonbury area of central Connecticut, where craftsmen assimilated Wethersfield and Colchester features into their work. The form is typical of Glastonbury case furniture while the center plinth pinwheel, upper case drawer arrangement, and shaped apron appear on Wethersfield work. The steeply arched bonnet with applied rosettes reflects Colchester influence. With its closed bonnet, rosettes, plinth pinwheel, and Wethersfield inspired apron, this high chest relates to a group of furniture attributed to the shop of Isaac Tryon (1742-1823) of Glastonbury, Connecticut. This group is identified and discussed in Connecticut Valley Furniture: Eliphalet Chapin and His Contemporaries, 1750-1800 by Thomas Kugelman and Alice Kugelman with Robert Lionetti, who name the group on the basis of a bonnet-top high chest signed by Isaac Tryon and dated 1772.1 The shell carved drawers, cabriole legs and cup-shaped feet are similar to those on a high chest representing a different shop tradition that was originally owned by Mary Hollister (1764-1840) and Samuel Stratton (1758-1807), of South Glastonbury.2 The combination of characteristics found on this high chest suggests it is a derivative piece made by a rural craftsman modifying shop traditions from those areas. With its elegant form, idiosyncratic carving, and graceful cabriole legs, it serves as testament to the fine quality of his work.