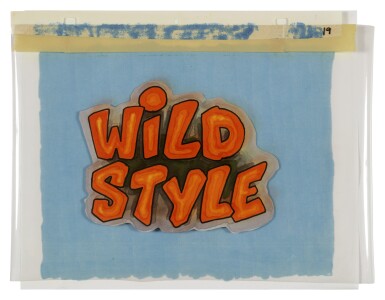 Animation cel (13 1/2 x 10 1/2 in.) Ink marker on cel paper, applied to celluloid, with printed background. Strip of masking tape along top edge where cel was affixed to background; adhesive no longer holds.

After his first film The Deadly Art of Survival, Ahearn was approached by graffiti artist Fred Brathwaite, aka Fab 5 Freddy to do a film on Hip Hop culture, looking at graffiti art, DJing, breakdancing, emceeing, and more. Lee Quinones was brought in to work on the project, and Busy Buy Starski joined soon after. Production began in the summer of 1980, and the film first screened in 1982, with the official premiere in times Square in 1983.

The premiere broke records by selling out every screening during the three week run. Ahearn aimed to show real people doing real things, and the cast of the film was an incredible who's who of the Hip Hop world, with everyone from Quinones and Brathwaite, Lady Pink, The Cold Crush Brothers, Zephyr, Rammellzee, Grandmaster Flash, Busy Bee Starski, Futura 2000, and many more. The soundtrack was produced by Brathwaite in collaboration with Chris Stein, of Blondie, and was mixed by Grandmaster Theodore with lyrics by Grandmaster Caz. The film was a tour de force, and is now considered the definitive film on Hip Hop culture.

This is Wild Style animation cel, used in the movie's opening Animated Title Sequence was designed by Jane Dickson, drawn by Zephyr and Revolt, and animated by Joey Albums. It was completed in the Summer of 1982 in Ahearn's Times Square loft with everyone there for a month. The Title Sequence to the film was shot by Joey Albums in 16mm like movie.