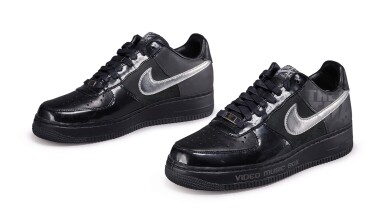 Designed by DJ Clark Kent to celebrate the 25th anniversary of Video Music Box. Only 25 pairs were made worldwide, and feature a black-out upper with a silver Swoosh, with a Video Music Box graphic on the hell tab of the left shoe, and a "25" on the right shoe.

Video Music Box, launched on WNYC-TV in New York City in 1983, was the first ever Hip Hop music video tv show. Created by "Uncle" Ralph McDaniels and Lionel "Vid Kid" Martin, who also served as the series' hosts. The show preceded Yo! MTV Raps by five years, and numerous artists from the Golden Age of Hip Hop made their debuts on the show. The influence of the show on the music industry, and as a documentary record of Hip Hop, fashion, and the history of New York city, cannot be understated. To celebrate the 25th anniversary of the program, Nike created this special pair of Air Force 1s.