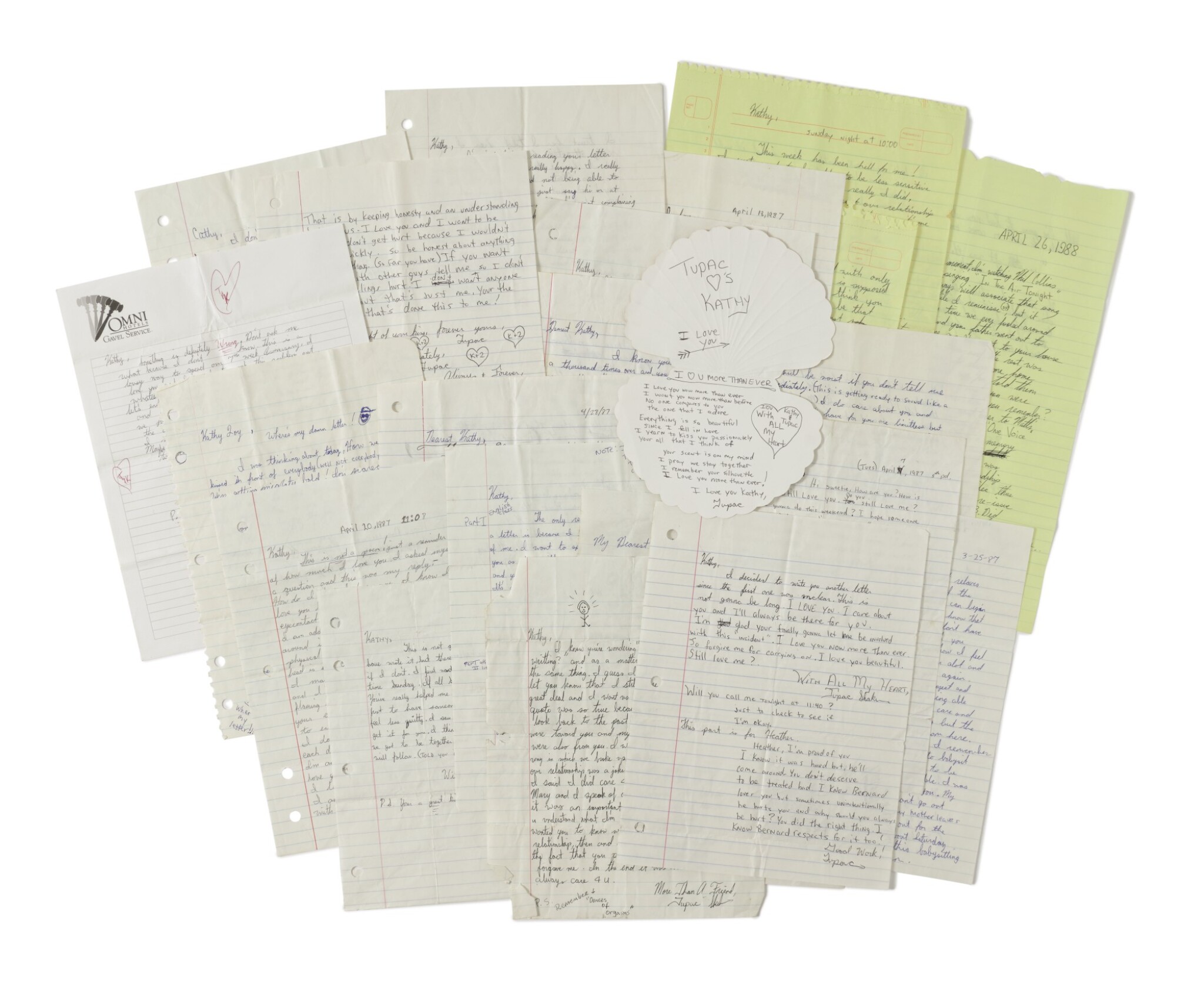 ARCHIVE OF 22 UNPUBLISHED AUTOGRAPH LOVE LETTERS, VARIOUSLY SIGNED ("LOVE, TUPAC"), ("4 ETERNITY, TUPAC"), ("WITH PASSION, TUPAC"), ("FOREVER YOURS, TUPAC"), ("WITH ALL MY HEART, TUPAC"), ETC, TO KATHY LOY, A HIGH SCHOOL SWEETHEART AND FELLOW STUDENT AT THE BALTIMORE SCHOOL FOR THE ARTS. BALTIMORE, LATE MARCH, 1987, TO APRIL, 1988.

AN INTIMATE, EARLY ARCHIVE OF TEENAGE LOVE LETTERS, WRITTEN BY ONE OF THE GREATEST AND MOST TALENTED RAPPERS OF ALL TIME

An incredibly sweet and at times steamy archive of love letters, chronicling the approximately 2 month-long romance between 16 year old Tupac Shakur and Kathy Low, a fellow student at the Baltimore School for the Arts, while Tupac was enrolled in the 10th grade theatre class (along with close friend Jada Pinkett), and Kathy in the 11th grade theatre class. The letters span from their first meeting, to their eventual break-up, and include a letter of regret sent a year later. The heartfelt and sweetly-sincere correspondence reveal Tupac’s naturally poetic writing-style, with frequent lyrical turns and love poems included in the body of the letters "I love you now more than ever, want you now more than before, No one compares to you, the one that I adore...",  as well the occasional drawings of hearts and other flourishes. The letters reveal that the young Tupac very quickly developed strong feelings for Kathy, leading him to quickly confess his love for her, and then just as quickly, to experience feelings of insecurity and fear of losing her, for which he often apologizes. Leading to the end of their relationship, Tupac alludes to personal & family struggles, and the letters reveal the strong bond of friendship between Tupac and Jada Pinkett whom he frequently references ("Jada told me she can see how much I love you...", "Jada told me she's attracted to..."). Included are some glimpses into his home life, with mentions of his mother having to work late nights, and his responsibilities to help care for his cousins. The correspondence reveals that the future superstar had doubts about his career, and considered giving up on music "My old manager came over and said she doesn't want me to retire from rap but I think I am because I can't handle too much rejection and I don't have the time...", and that insecurities and fear of rejection often plagued him "I just want to be less sensitive and less of a pest.... What I am feeling has to do with my insecurities, and I have to handle that on my own..."

In the final letter addressed to "Ms. Loy" and written nearly a year after the pair's break up, Tupac shares that now, at the age of 17, he has moved out of his mother's home and in with a roommate. He sincerely expresses regret over their break-up, while tenderly reminiscing about the good times that they shared together. "Forgive me while I reminisce....do you remember?"