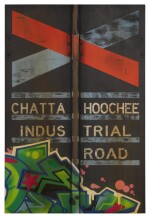 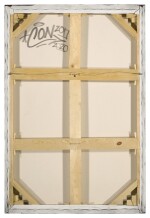 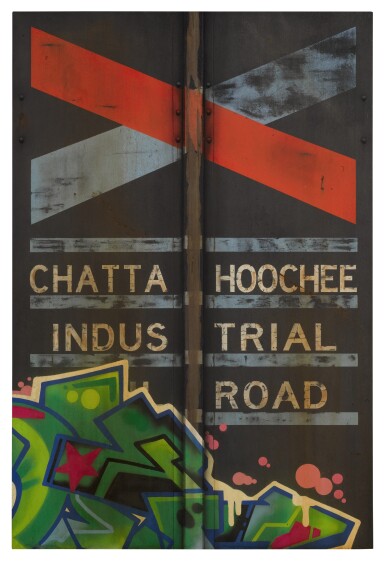 In his Blank Canvas series, Tim Conlon has combined his graffiti pedigree with photorealistic representations of the train surfaces he has painted to pay homage to railroad history. Using spray paint as the medium, the paintings are scale studies that bring railroad logos, weathering, and the art of graffiti into close focus. This survey features snapshots of these shipping behemoths preserved to canvas, as well as a study of detailed G scale model trains. Conlon’s work utilizes many layers and color transitions in a mixed media fashion to re-create the rust, dents, and scratches. A “rail archeologist” who has spent more than 25 years walking train lines and documenting freight trains found across North America, Conlon’s art catalogs the lost logos of railroad companies that have been discontinued due to train fleet consolidation, time, and decay. With the increase of intermodal transport, these boxcars inch closer to extinction as shipping containers take their place.

Rather than trade in his cans for paintbrushes, Conlon relies on tried-and-true spray paint techniques to achieve a trompe-l’oeil effect on canvas. About this style, Conlon says, “Certain pieces that I’ve created depend on acrylics for effect and detail, but I try to work within the parameters or ‘rules’ of a graffiti artist: your work must show your ability to produce strictly from a can of spray paint or marker. A writer’s ‘can-control’ is the most important painting skill to learn, so it has been important to me to continue evolving this technique on canvas.”

Tim Conlon is a artist best known for his large-scale paintings, murals, and sculptures. Conlon often depicts weathered freight trains adorned with graffiti in his photorealistic pieces. His work has been featured in the Smithsonian National Portrait Gallery, Los Angeles Museum of Contemporary Art, Corcoran Museum, as well as the “Beyond The Streets” exhibits in both Los Angeles and New York. He has also been featured in numerous exhibitions and art fairs around the globe. Conlon lives and works in Los Angeles, California.