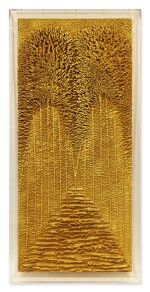 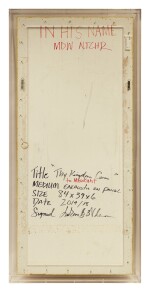 A sculptor and painter living and working in New York, Lerone Wilson’s primary medium is beeswax, the oldest form of painting, used by the ancient Kemetic people to create art, among other things. His sculpted encaustic paintings explore the complexities of the historical and cultural inferences of spirituality, history and identity. A finalist for the Louis Comfort Tiffany Award and winner of Best in Show for the Carroll Harris Sims Award, Wilson has shown in galleries around the country, including Rush Arts, Kim Foster, Boccara Art, White Box and G.R. N'Namdi in New York and Chicago; the Scope Art Fair Miami; Cutlog Art Fair, New York; and SPRING/BREAK Art Show. He won the 2011 Bombay Sapphire Artisan Award, given during Art Basel Miami week, beating out 4,000 artists from across the country. In 2019, he was featured in the Special Projects section of Art New York and invited to participate in the Pierce and Hill Harper Foundation Artist Residency in Detroit. Wilson’s works have also appeared in museum shows, including the Museum of Biblical Art in New York and the African American Museum in Dallas.

One of Wilson's most recent projects includes the monumental "Black Lives Matter" mural at the corner of 125th Street and Adam Clayton Powell Jr Boulevard, in the heart of Harlem; his love