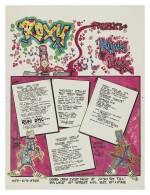 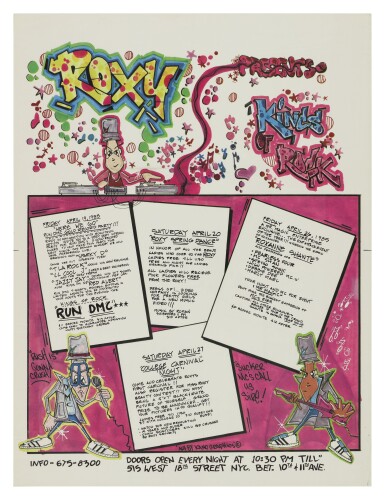 KANO | "THE KINGS OF ROCK" VINTAGE ROXY POSTER, WITH ARTWORK BY KANO, 1985

KANO | "THE KINGS OF ROCK" VINTAGE ROXY POSTER, WITH ARTWORK BY KANO, 1985

Vintage poster (17 1/2 by 23 inches), printed in colors on lightly coated stock, with artwork by Kano; some minor toning and marginal creasing.

Kano is a graffiti artist active who began writing in the 1970s, and has been associated with the TC5, Stars Inc., CIA, and LOC crews. Kano designed only two posters for the Roxy, both of which are being offered in the present sale (see lot 22).

Kano designed only two posters for the Roxy, the present lot, and lot 22.

Please note, this item does not come with two duplicate copies as previously stated in the catalogue.
Lot 20