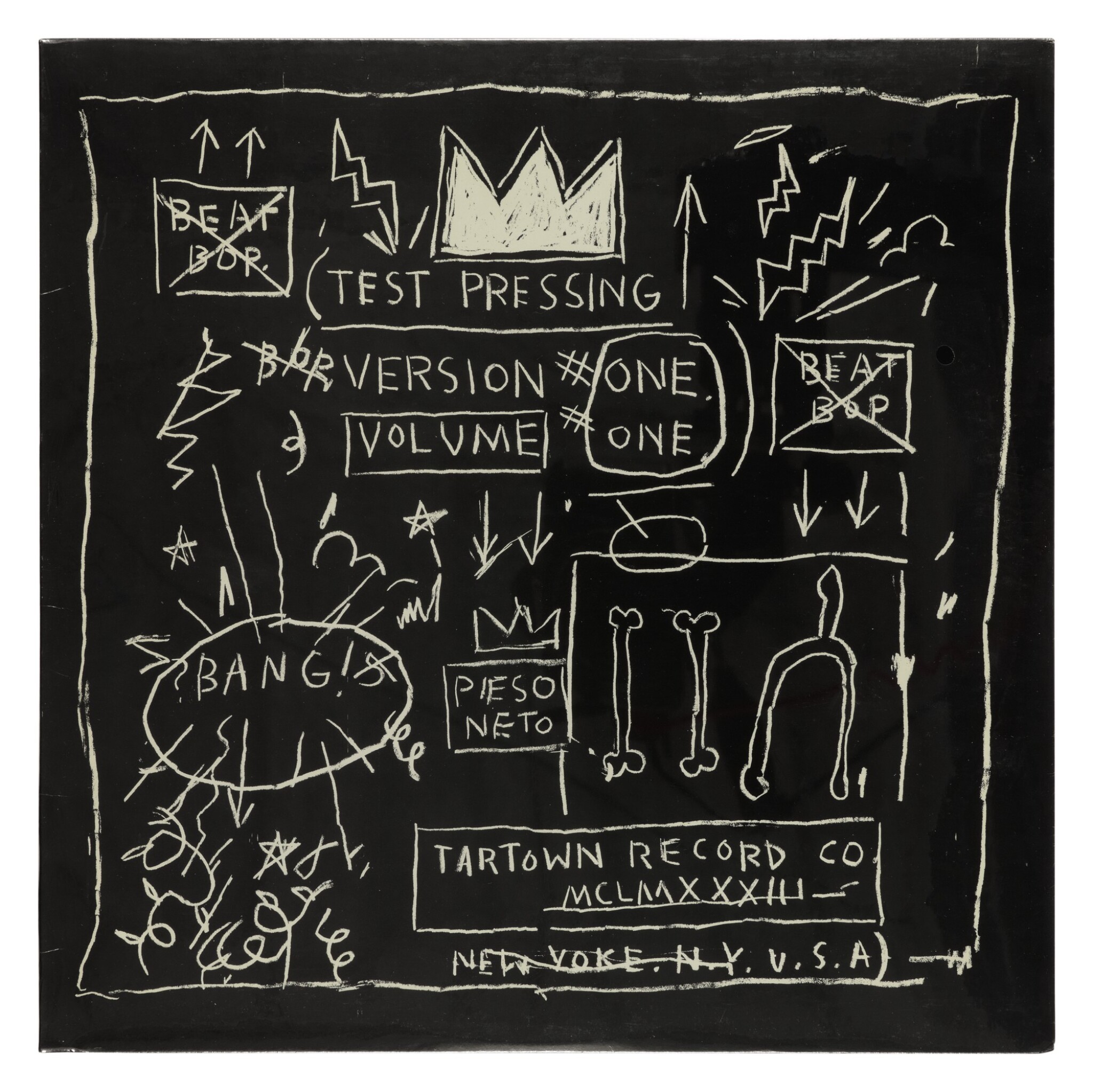 A legendary Hip Hop and artworld rarity of only 500 copies

In 1983, Jean-Michel Basquiat produced, directed, and issued the Rammellzee vs. K-Rob “Beat Bop” 12” on his own Tartown label, with cover and label artwork famously rendered by Basquiat himself.

Releasing the track was a natural step for Basquiat, whose passion for music led him to amass a wildly eclectic vinyl collection, co-found the experimental band Gray, and act as a DJ at the Mudd Club and at Area.

Originally intended as a rap battle between graffiti artists Basquiat and Rammellzee, apparently the rhymes of the more famous of the two weren't up to par and it evolved into an experimental, slow and somewhat spacey 10 minute track with Rammellzee and K-Rob on vocals.

Long sought after as a "holy grail" rap vinyl, the present copy is sealed in the original shrinkwrap.

From "Basquiat's 'Beat Bop': An Oral History of Once of the Most Valuable Hip Hop records of All Time" (Spin, 2013).

"Cory Robbins, founder, Profile Records: This DJ named John Hall used to come by [the office], and one day he said, “There’s this record you should know about called ‘Beat Bop,’ it’s by this artist Jean-Michel Basquiat,” who I had never heard of. He was able to get a cassette or something. I thought it was cool as shit. It was druggy, it was so out there. All of a sudden there’s lots of echo, and then the echo’s gone. Nobody made records like that. No record producer would make a record like that. It didn’t follow any rules. It was long and it didn’t have a hook. It was so free-form. There’s no record like it. I said, “Cool, where do I get it?” He said, “You can’t get it, it’s only sold through some art gallery.”

I think I called the Mary Boone Gallery, and they gave me Jean-Michel’s address, but they wouldn’t give me his phone number. So I sent him a mailgram saying, “Please call me about putting out your record.” A couple of weeks went by, and the phone rang, and it was him. I introduced myself — I had a label, and we had some success with rap music at that point — and I said, “I’d like to put your record out.” He says, “Oh, okay. Okay!” I’m like, “Well, wait, we have to make a deal.” A few days later, he just comes into my office unannounced, and he gives me the master tapes. I said, “We didn’t sign the record yet, I’ll hold onto these, but I can’t do anything with them until we sign a contract. I’ll just put them in the cabinet and hold them until the deal is done.” He was very sweet and very trusting.

I sent him a contract — the contract’s like 40 pages long. It was a typical record contract, and weeks go by, and I don’t hear from him. Then he calls me up and goes, “This contract’s too long, I can’t sign this.” I said, “I’ll come over tonight and explain it to you, if you have questions we can go through it.” So I go to his loft on Crosby Street, and there are paintings just everywhere, like a hundred paintings in stacks. I take out the contract and say, “Here’s page one, this is what this means.” I get to page two, “This is what this means.” Page three, he goes, “Oh, that’s fine, I’m just gonna sign it.” “I’m happy to explain everything….” “No, no, no, it’s fine.” So, he just signed it. We put the record out. I gave him a check for $1,500, which is what the advance was on the record, which was kind of typical.

Diaz: It went to Profile, and the cover changed at that point. There were no more of the black-and-white Basquiat collectors-item covers — it was just the old Profile single covers, the regular red and black with the “Pro” [logo].

Robbins: The worst thing I did was… He said, “I’ll make new artwork for your release.” And I said, “No, no, no, we’re just gonna put it in the Profile jacket.” And that was really stupid. That [painting] would probably be worth millions now. But I’m in the record business — I knew very little about art back then.

So, we put the record out, and it doesn’t do that much. It’s kind of an underground record. We licensed it to Island [in the U.K.], and they put it on a compilation, a big compilation. [Ed.: It’s likely that Robbins is referring to the Street Sounds Electro 2 compilation.] They sent us royalties, and I think he was entitled to, like, half the royalties. So, over a few years, we sent him like $5,000 in royalties. I hadn’t seen him in a while. Then I ran into him at Great Jones Café, which is still around. I think, by then, he had moved to Great Jones Street. And he said, “You know those checks you keep sending me? I haven’t cashed those, because they’re made out to Tartown Inc.” That wasn’t really a company. So he said, “Can I give you back these checks and have you make a check out to me?” Our offices were around the corner on Broadway and Astor. So he did, and we did. But that’s how loose he was, very trusting, and I guess he didn’t care that much about money. If he didn’t run into me that night, he might’ve never told me."

"Basquiat’s ‘Beat Bop’: An Oral History of One of the Most Valuable Hip-Hop Records of All Time" (Spin, 2013) https://www.spin.com/2013/11/beat-bop-basquiat-k-rob-rammellzee-freak-freak/