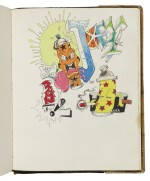 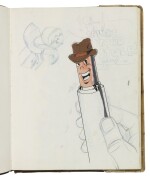 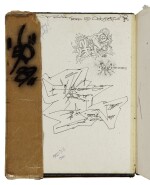 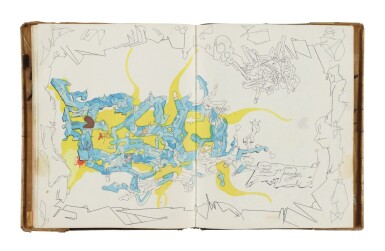 Black hardcover notebook with hand-made paper and packing tape dust-jacket, (13 1/2 x 11 in), 174 single pages, plus 2 double foldout pages, done variously in pencil, back ink, and color, with a total of at least 71 different pieces, at least 33 being by Esquire, and the others by a variety of artists, including Martin Williams, "Joey", Stevie Debie, and Eddie Ed.

A VERITABLE TIME CAPSULE, CAPTURING A SLICE OF THE NEW YORK GRAF ART SCENE OF THE LATE 1980S-EARLY 1990S.

Buddy Esquire was a prolific handbill artist in the South Bronx during the early days of Hip Hop. Over a 5-year period, he designed over 300 flyers, which were given out in the neighborhood to advertise parties. His style, which he referred to as "neo-deco" was very distinctive and instantly recognizable, borrowing heavily from Art Deco movie poster designs. His "writing" style was very distinctive and instantly recognizable.