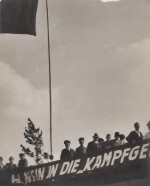 gelatin silver print, annotated 'Copyright by Tina Modotti' in ink and with an Atelier Jacobi copyright stamp on the reverse, 1930

Please note the colors in the online catalogue illustration may vary depending on screen settings. This early photograph is in generally excellent condition. Under close examination, the following are visible: some deposits of retouching that have yellowed somewhat along the upper edge; faint age-appropriate silvering primarily in the darkest areas of the image along the lower edge; and a crack in the emulsion along the lower edge. The photograph is trimmed to the image. There are small losses at the tips of the upper and lower left corner, and along the upper edge. There is intermittent edge chipping. The photographer's signature and copyright are written in ink over the Atelier Jacobi stamp. Adhesive and paper remnants on the reverse suggest this photograph was previously mounted. The following is written in pencil in an unidentified hand: 'Versand durch Jacobi Charlottenburg' (Shipping by Jacobi Charlottenburg); 'C1545'; and 'T.'

"Richard Moore Photographs has a special interest in work by photographers combining masterful artistic execution with a documentary point of view. Two important women photographers who exemplify these qualities are Dorothea Lange and Tina Modotti.  Both photographers created iconic images widely reproduced and valued by museums and collectors. These early printings are rarely seen images by these two remarkable photographers.

After her expulsion from Mexico because of her political activities, Tina Modotti settled in Berlin in 1930 and tried to support herself through photography. The Berlin photographer, Lotta Jacobi, gave Modotti the use of her darkroom and studio and offered to distribute Modotti’s photographs through her photo agency, Atelier Jacobi. This probably unique print of a workers rally has the Atelier Jacobi credit stamp on the verso. Modotti signed boldly in ink over this credit stamp, “copyright by Tina Modotti”. While intended for reportage, the dynamic composition of this image exemplifies Modotti’s embrace of the German Neues Sehen (New Vision). Very few examples of Modotti’s work made in Berlin survive. Upon leaving Berlin to live in Moscow in late 1930, Modotti gave up serious photography and devoted herself to Communist Party activities." - Richard Moore

Founded in 2000, Richard Moore Photographs is a private dealer of photographs, primarily vintage works by 19th and 20th century American photographers. Specialties include California photography, The Photo-Secession, Group f/64, Farm Security Administration (FSA) photographers, Social Documentary photography and Photo-journalism. Richard Moore has served on the AIPAD Board of Directors since 2011 and is currently President.